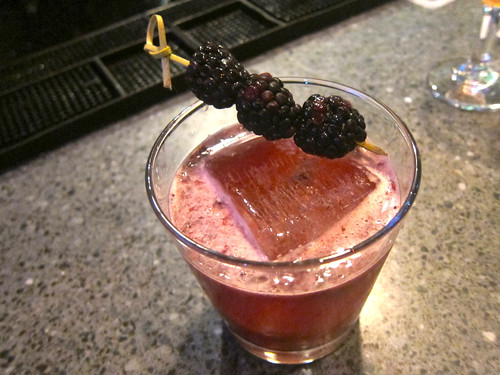 Table 24[/caption] There are some restaurants in Los Angeles that have achieved a sort of double-edged iconic status. Their names have been cemented in history due to the decades of their resilience - a resulting longevity which suggests, “If it ain’t broke, don’t fix it.” Yet. We can all agree that the definition of “ain’t broke,” or “competent,“ has evolved in regards to the way we have grown to consider cocktails today, which is in itself a wonderful thing. Kate Mantelini, a place that is all at once regarded as a Beverly Hills ”coffee shop” [Zagat], power lunch hub and pinpoint on every star map in existence, has effectively shed their 1980s-era defunct ways of creating and enjoying cocktails thanks to the new menu by Devon Espinoza. [caption id=“” align=“alignright” width=“180”] 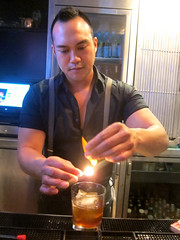 Devon making a Don Draper Old Fashioned[/caption] I stopped in last week to see the results of Devon’s latest consulting gig and the drinks, complete with Neve Ice, were nothing short of what Kate Mantilini needed. When an establishment that dates as far back as Three Men and a Baby and Good Morning, Vietnam, stops shaking their Martinis and Manhattans, Generation “letter” Angelenos may finally profess that old-establishment Beverly Hills is starting to catch up. Well, when it comes to cocktails, at least. Just don’t ask us to take the $17 “meh” cocktails at Spago seriously. (All cocktails at Kate Mantilini are $12.) Of course, the C-CAP competition-winning, CIA-graduate, Spago alum Devon is one we can call our own. And the cocktail menu, which is 7 drinks wide, is a manageable and diverse yet accommodating list that will both please and maybe even slightly challenge drinkers and those who merely want to look like they are. Take the Old Fashioned variation, or the Don Draper (note the life-size Mad Men posters adorning the rafters, a funny kind of cross-promo ad deal), which uses Buffalo Trace Bourbon, Carpano Antica, Jenick Fernet and Allspice Dram. The Czech Fernet, which leans more cinnamon than the licorice-y Branca, is a perfect enhancement to the classic. It’s a more fancy version yet still knows when to stop. The Table 24, inspired by the table at which De Niro and Pacino’s scene in Michael Mann’s movie “Heat” was filmed inside the restaurant,  is fruity yet seasonal. The delicious Dewars White Label, lemon, ginger, honey and blackberries combine deliciously with the touch of “heat” coming from the fresh ginger. [caption id=“” align=“alignleft” width=“171”] 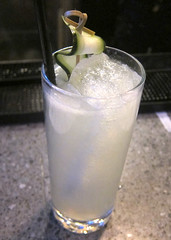 Cucumber Rickey[/caption] Those who want a fast sipper for an effervescent refreshment can order a basic but delicious Cucumber Rickey, made with El Jimador Blanco, St. Germaine, lime, cucumbers and soda. Tart and sweet (dare I say “girly”) drinkers will no-doubt love the Passion for Hamlet, inspired by founder Harry Lewis’ love of playing the tragic character, made with Russian Standard Vodka, passion fruit, lemon and housemade grenadine. (Other relevant historical fact: The duo of Harry & Marilyn Lewis also originally founded the Hamburger Hamlet chain.) Chartreuse lovers will love the Chartreuse Swizzle, made with lime, pineapple and Falernum. The apple-focused Winter Julep is perfect for the current “chilly” temps in Los Angeles, made with Apple Jack Brandy, spiced syrup and mulled apple cider.  And Devon’s Negroni contribution comes under the name Cardinali, a name inspired by co-founder Marilyn Lewis’ clothing line, made with Bombay Dry, Dolin Blanc and Campari. The introduction of modifiers as well as fresh herbs, fresh fruits, stirred method and housemade syrups was a trip for the long-tenured team at Kate Mantilini, but it’s kind of exciting to see an establishment step up their cocktail game - if only because the “power lunch hotspot” moniker applies to my office life, as well. Get thee to Kate Mantilini. I’ll be sitting at the bar. All cocktails were hosted.