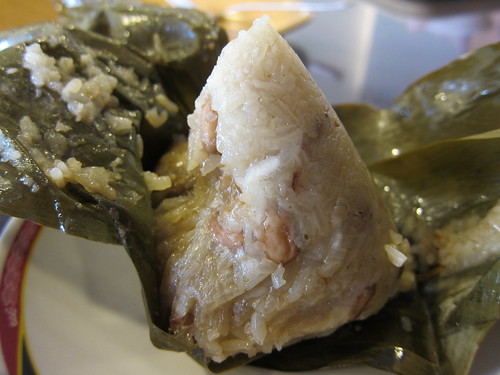 [/caption] Hello from Taiwan! These past few days while on vacation, I’ve been discovering a little (or a lot) about my roots. A large part of my cultural lesson during the beginning of this trip has been through the consumption of each meal in the major city near where my mother grew up - Kaohsiung, in the south part of the island. There is no better way to learn about a people than walking in their shoes - by eating what they do. [caption id=“” align=“alignleft” width=“240” caption=“Milkfish Paste Soup”] 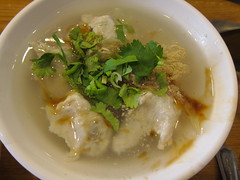 [/caption] Fortunately, I’ve been exposed to a little bit of traditional Taiwanese cuisine since a lone Taiwanese American kid growing up in Wisconsin thanks to my mom’s cooking. Yes, she once made Bah-Tzang, the pyramid-shaped “Taiwanese tamale,” on a regular basis. I remember watching her fill the bamboo leaf-wrapped cones first with sticky rice and soft, boiled peanuts, then a mixture of slow-cooked beef cubes, black mushrooms and dried shrimp before folding over the leaves, tying the pyramid up with a string and boiling these neat-wrapped packages in the rice cooker. All this, while the only other things I wanted to eat were McDonald’s, bratwurst, ambrosia salads and macaroni casseroles like the rest of my friends. But Bah-Tzang always was a near and dear dish to my heart and heritage while all other Taiwanese dishes were merely oddities with strange flavors and textures. That is, until my palate graduated to a level that could appreciate them. Sweet chili sauce and soy are the best condiments with which to appreciate bah-tzang - and as you collapse the steaming tamale with your chopsticks, notice the texture of the sticky rice and the delicious smell. This is folk food at its finest and most portable, enabling us modern eaters to freeze and nuke at will. Check out this post on Tiny Urban Kitchen: Taiwanese Rice Dumplings (includes history, recipe) for a break-down. [caption id=“” align=“alignright” width=“240” caption=“Wahgui | Bowled Rice Cake”] 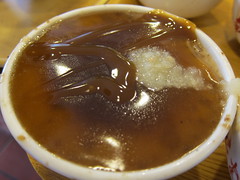 [/caption] Milkfish paste gravy soup is a delicious soup with the consistency of a liquified gravy and taste of a light broth - with the clear color to match.Â  Do not mistaken the milkfish for fish balls; the paste gives a more tender bite. If you see milkfish/swordfish ball soup, expect the soup to be a clear liquid. By tradition, milkfish paste soups are thicker in consistency with the help of cornstarch. Season it with white pepper and together with its minced green onions and cilantro, the simple soup will have you slurping til the last spoonful. Wahgui, or translated directly, rice bowled cake with sauce, may be mostly glutinous rice cake, but make no mistake - the bowl gives it its name and shape. Mixed into the sticky, soft texture are radishes and dried shrimp, and a sweet, rich sauce (in translated name only, but I prefer “gravy”) - is heaped on top of it to give it that umami. Add a chili sauce to it to make it hot, if you wish, but this bowl of goodness is as decadent as Taiwanese food gets. All three of the above dishes, which I had on the day I landed on Formosa, cost between 30 and 35 NT (New Taiwan Dollars) each - the equivalent of $1 USD. You may only know Taiwanese food as Xiao Long Bao, or juicy pork dumplings - especially in Los Angeles (see: Din Tai Fung) - but let’s set the record straight. This is traditional Taiwanese food; XLBs came to the U.S. by way of Shanghai through Taipei (in Din Tai Fung’s case - only after the Chinese Civil War) since Communists hardly let their people emigrate.