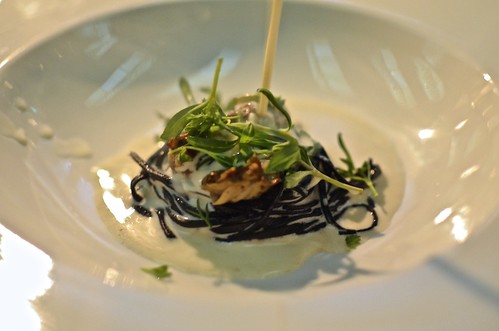 Oyster Stew with black garlic, Meyer lemon, petit herbs[/caption] Last month, I got a chance to partake in one night of the excellent Culinary Masters series going on at The Strand House in Manhattan Beach. The chef of the night was John Besh in the wake of the release of the Louisiana native and home cooking champion’s latest cookbook, “Cooking From the Heart,” and the celebratory 6-course dinner, expertly paired with Bwise Vineyard Wines, was nothing short of fantastic.

Jellyfish and shrimp were the highlights of a slightly spicy green papya salad, the refreshingly crunchy dish that kicked it all off. But the oyster stew that followed, made with black garlic noodles and accentuated with Meyer lemon and micro herbs was nothing short of an umami bomb. (By the way, how rude is it really to be licking the plate in what one calls a “fine dining” establishment?) And then came gnocchi, cleverly dubbed “Black and Blue,” though the hues were a neutral white and brown. Black truffle is shaved over potato pillows and Blue crab – taking continually comforting, savory notes to yet another level after the oyster stew. And then came the proteins. The flavors of tender oxtail and deliciously charred, flaky seabass were unifed by a cauliflower puree, trumpet mushrooms and bone marrow for a variety of savory textures on a plate. And then there was tender, juicy duckling sourced from Chappapeela Farms, coupled with dirty rice and a sparing serving of kimchi for just the right amount of acidity. The final course, dessert, was not the time to hold back – and the results were a Blonde Chocolate panna cotta made with bittersweet chocolate, pecan and coconut. It was chocolatey rich but also aromatic thanks to the touch of coconut. And then I was sold. Every dish was imaginative yet almost flawless in execution, and had me thoroughly convinced that I had missed something essential by not visiting one of Besh’s restaurants on my latest jaunt to New Orleans. It was close, but definitely a runner up for one of my best meals of 2013. At the end of the night, owner Michael Zislis and Besh’s good friend and colleague (as well as resident chef) Neil Fraser raised a toast to the honoree and his successes. Cookbooks were bought and signed; pictures with Besh were taken by upscale-dressed diners. And I guess that is the art of a successful guest chef night in a series such as the Culinary Masters’. With past visiting chefs being local names such as Suzanne Goin, Michael Cimarusti, Ben Ford, Nancy Silverton and Matt Molina but also out-of-town kitchen stars like Jonathan Benno (Lincoln, NYC), Rick Tramonto (Tru and Trio, Chicago; Restaurant R’evolution, NOLA) and Jonathan Waxman (Barbuto, NYC), a dinner at The Strand House during one of these special nights promises to be one to remember. The next one is on February 10th featuring Curtis Duffy of Grace in Chicago, and apparently every one sells out in advance. So, don’t sit on it – make your reservation and get ready for a night of culinary extravagance. All food and wine were hosted.