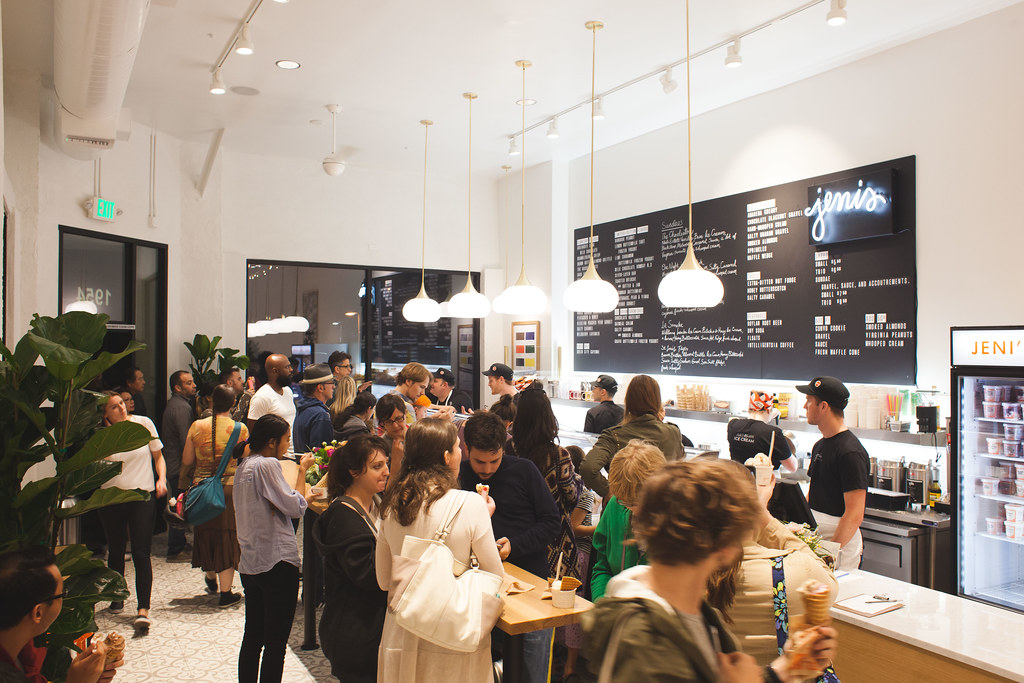 Jeni’s Ice Creams Opening Party[/caption] There’s some fantastic ice cream now on Hillhurst Avenue in Los Feliz and it comes by way of Ohio. It’s Jeni’s Ice Creams first West Coast outpost, and Los Angeles is all the better for it. What I love about Jeni’s is that the flavor combinations are quirky and the ingredients are top-notch, and while they glean ingredient inspiration at every new location they open, there’s still that special Midwest touch to everything they do. [caption width=“1024” align=“alignright”] 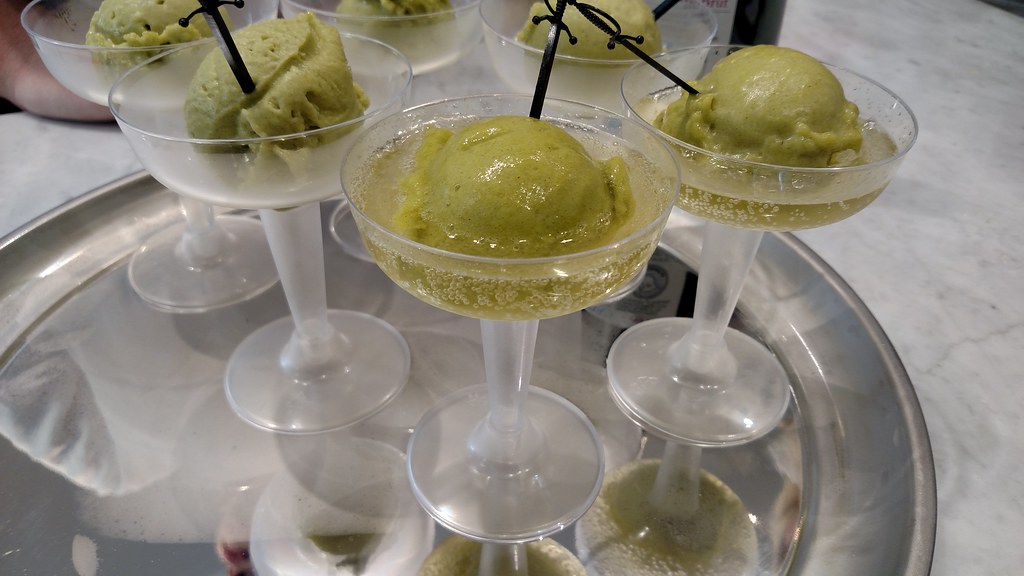 Wheatgrass, Pear & Vinho Verde Sorbet with Prosecco float[/caption] The exclusive flavor to the new Los Feliz location is pretty much perfect - a Wheatgrass, Pear, & Vinho Verde Sorbet that’s as lush as lawns we wish we had. But seriously: It’s great as a float in a glass of Prosecco, as was served at the opening party. It’s deliciously creamy but bright – and definitely Californian. This flavor is one of a few seasonal flavors, some of which eventually become signature flavors to be enjoyed throughout the year. And as a way of literally putting the “art” in artisanal, Jeni’s has unveiled flavors inspired colors for the month of April. Available right now is Garance Vert Clair, Noir D’Ivoire, and Ombre Brulee, all of which I can’t resist swinging by to try. Lemongrass, coriander, spirulina grace the green while licorice, sea salt and crunchy dark chocolate flecks comprise the Noir D’Ivoire. Peru balsam and brown sugar cookie butter are in the Ombre Brulee. Cadmium Yellow, Persian Orange, and Ultramarine Blue Buttermilk are all buttermilk frozen yogurts. [caption width=“1024” align=“alignleft”] 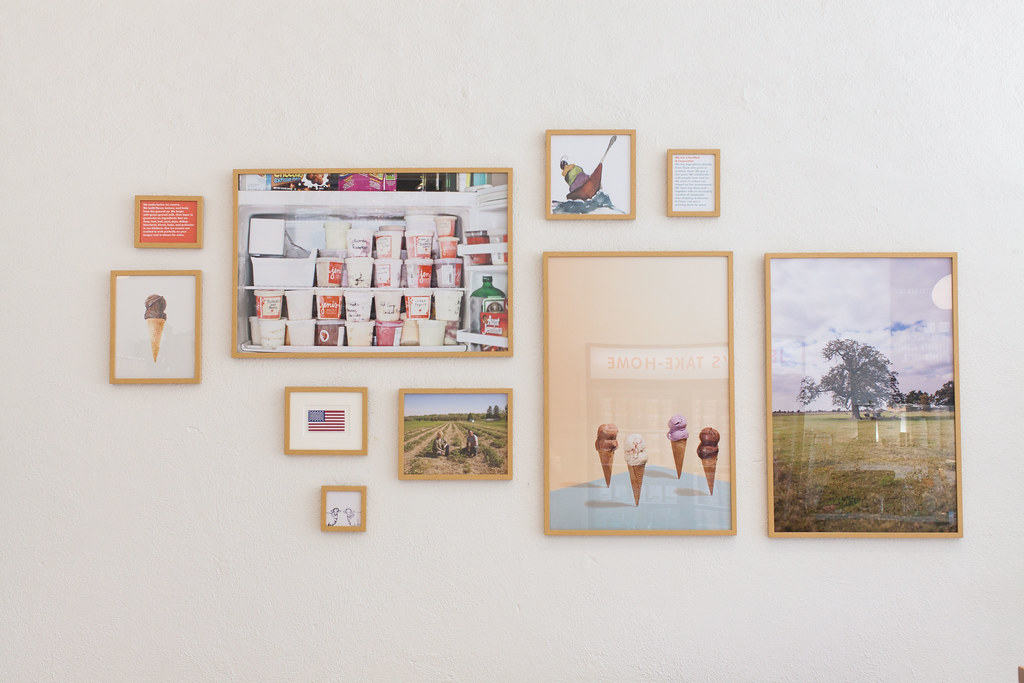 Back wall at Jeni’s, Los Feliz[/caption] They’ve got some great signature flavors with unlimited availability, too. Get multiple flavors and pair up a seasonal variety with a signature scoop. Their Intelligentsia Black Cat Espresso flavor, a signature partnership flavor with the Chicago roasters, is achieved by steeping roasted and ground beans in their special grass-grazed Ohio Milk. I loved how potent but balanced this flavor tasted. Also try their Buckeye State and especially their variety of Toasted Brioche flavors! [caption width=“1024” align=“aligncenter”] 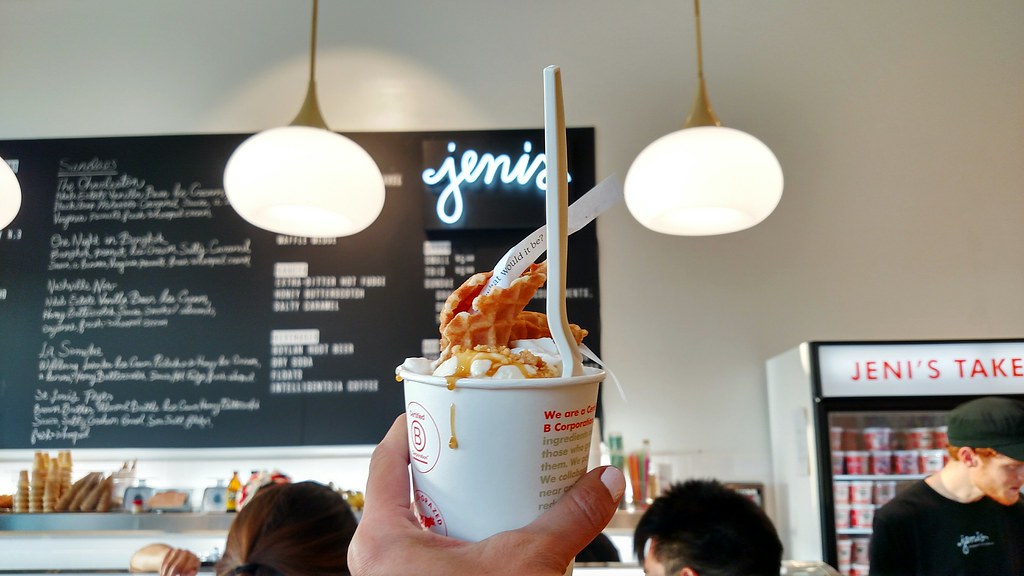 St. Louis Flyer Sundae[/caption] We haven’t even come to the frozen yogurts, sorbets, and ice cream sandwiches that are also available. The frozen yogurts are just as good as the ice creams. And if it’s just too difficult to decide which combination of flavors and toppings to get, you can do as I did on my second trip and order a straight-up sundae. I went with the St. Louis Flyer, a great sundae for salted caramel lovers. Scoops of Jeni’s Brown Butter Almond Brittle Ice Cream are topped off with honey butterscotch sauce, salty graham gravel, sea salt flakes, fresh-whopped cream, and a homemade waffle cone fortune cookie. It was devine. There are now 18 total Jeni’s Ice Creams shops in Ohio, Nashville, Chicago, Charleston (SC), and Atlanta. But there are also over 1700 grocery store partners throughout the U.S. So if you’re local to L.A., head over to Los Feliz (preferably during the off-hours since Jeni’s has already achieved cult satus) for a scoop or five. [caption width=“1024” align=“aligncenter”] 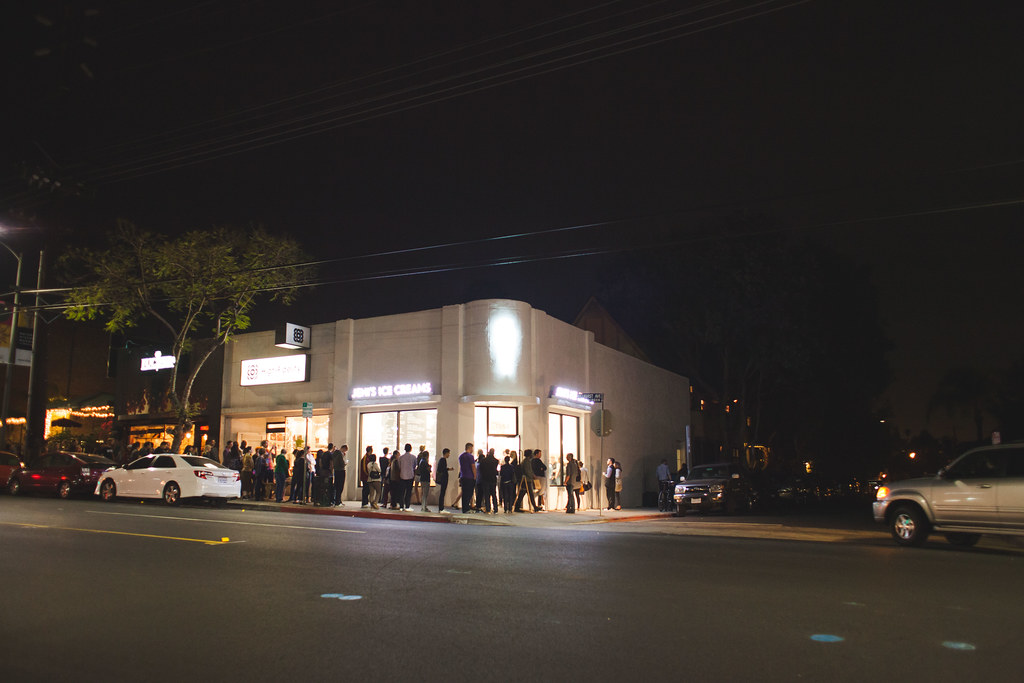