Jazz Up Your Fridays at LACMA With Patina's Picnic Baskets 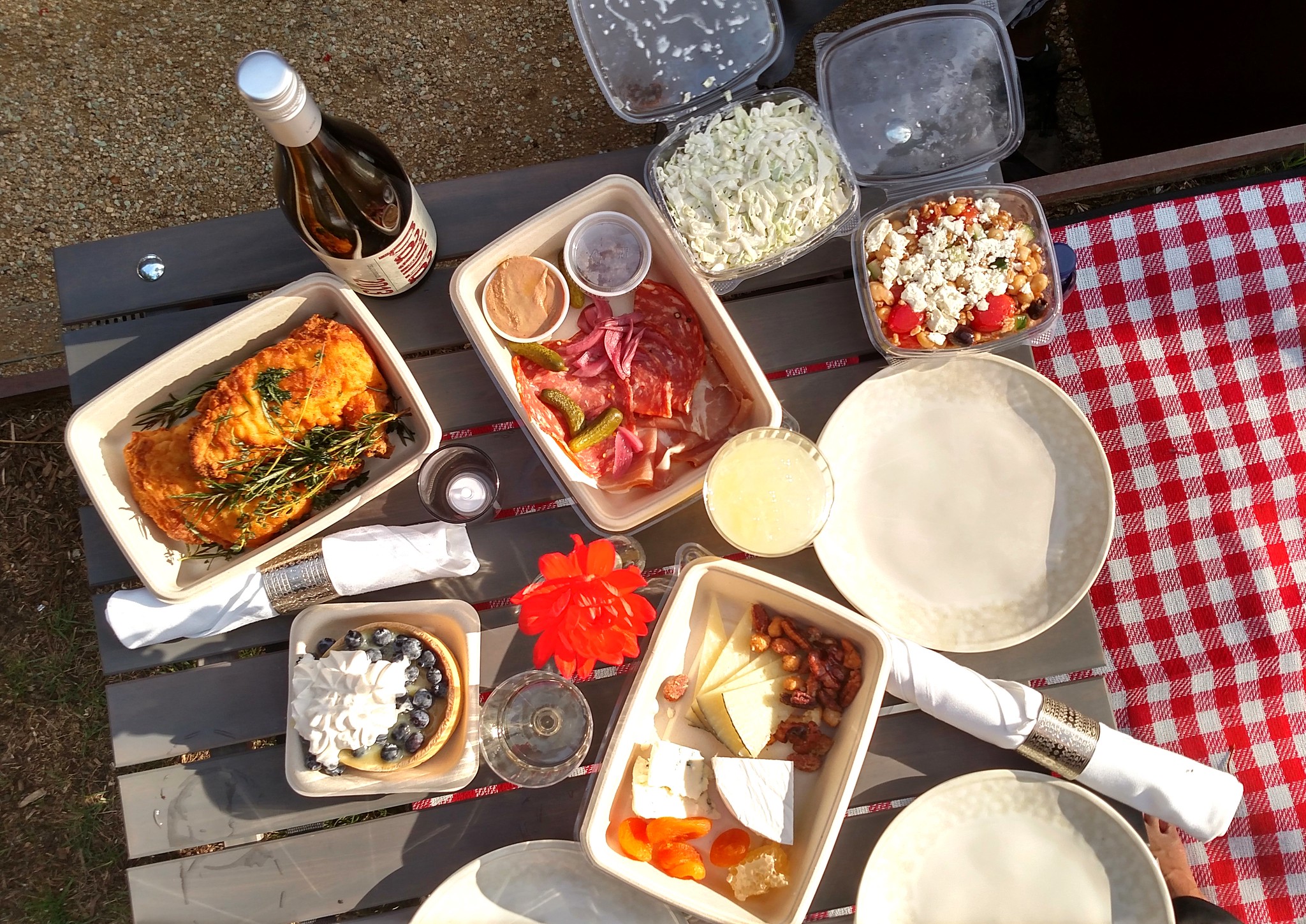 The Louis Picnic Basket (minus one serving of chicken)[/caption] The sun is out - when June Gloom isn’t in, that is. But when the high of summer arrives, you’ll bet it’ll be time for that picnic. Whether at The Hollywood Bowl, Cinespia or Barnsdall Art Park, picnicking in Los Angeles has become more than a rite of passage. It’s now an act of communal expression, with everyone in the party bringing their own contribution to the portable, potable feast. And there are those who bring too much. The brats who bring the chairs with high backs at Cinespia. The people who bring heavy China to the Bowl. The party who brings all the eco-unfriendly styrofoam to the venue then leaves the waste behind. [caption width=“2048” align=“aligncenter”] 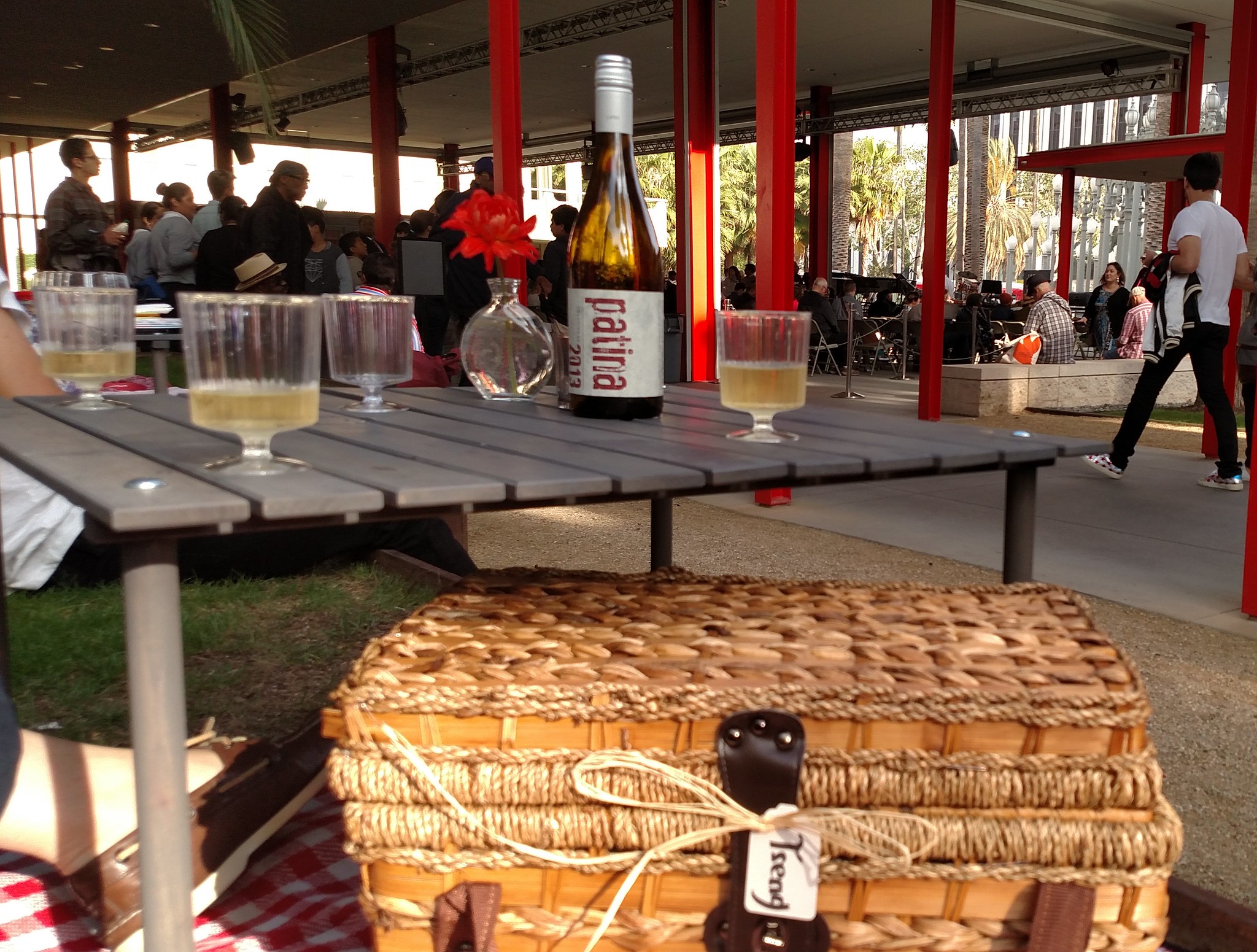 Picnic View[/caption] As for Fridays at LACMA, where they’ve established a steadfast summer tradition of free jazz concerts, you have the option of not only having your hot food waiting for you when you arrive, but you’ll get to enjoy it on China with fancy silverware and cloth napkins. Consider, too, that you’ll have a stylish red checkered blanket, slate gray mini table with two pillows and a tiny centerpiece staking out your jazz-combo-spotting-worthy spot on the grassy knoll before you arrive, and it’s pretty much a no-brainer. There’s really no better way to enjoy the Resnick Pavilion lawn, because you won’t have to pack any of it all up or lug any of your fancy equipment back home. Here are your two picnic basket options: [caption width=“2048” align=“alignright”] 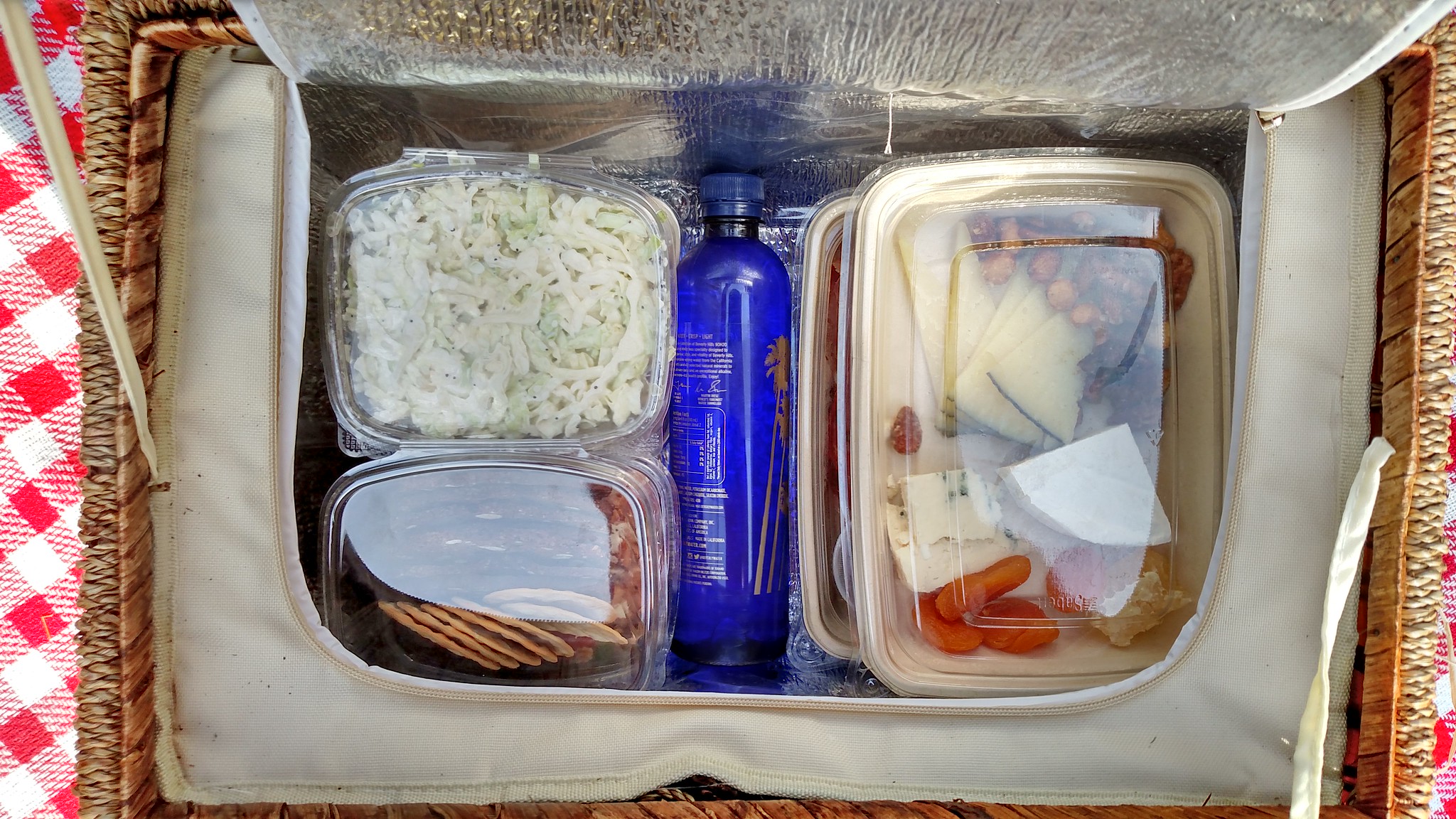 The Louis ($100 - with bottle of wine, real china, a fold-out table, a picnic blanket, and cloth napkins presented in a wicker basket) Cheese and Charcuterie Board: Chef’s choice of one domestic cheese, one imported cheese, one soft ripened cheese, salami, prosciutto, and one house made pâté Choice of Two (2) Sides: Farfalle Pasta Salad, Classic Coleslaw, Chickpea Farro Salad with feta Seasonal Dessert Bottle of Signature Patina Label Vega Sindoa Chardonnay or Merlot Also: LACMA Members will get an extra flight of sparkling wine! 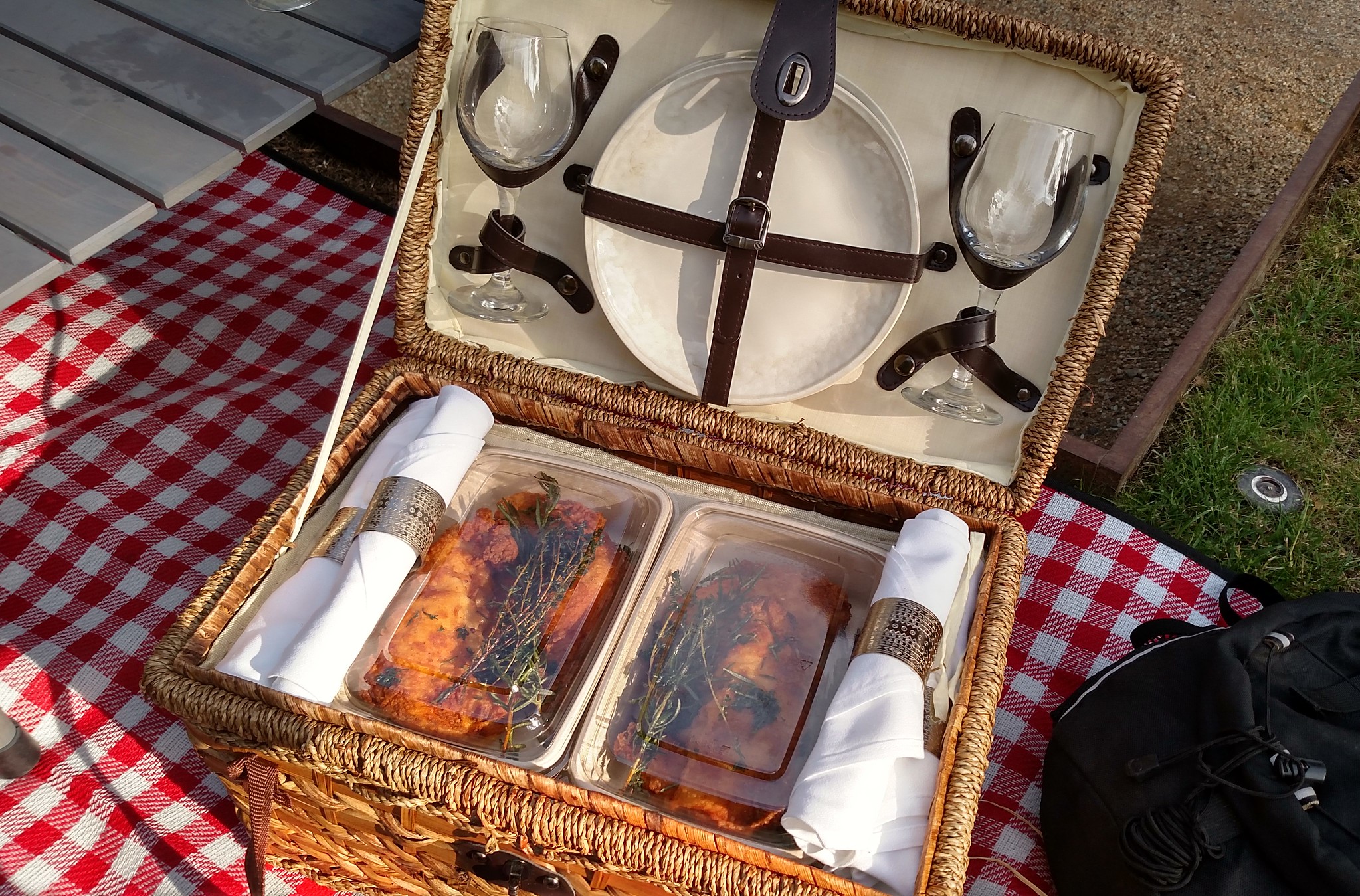 Louis Picnic Basket[/caption] I picnicked with The Louis basket and 3 other friends, and though it’s meant for two, my friends and I were basically full by the time we were finished, with fried chicken to spare. It’s a lot of food! At ~$25 per person, it’s pretty much a steal; you have your spot staked out and there’s no clean-up. [caption width=“2048” align=“alignright”] 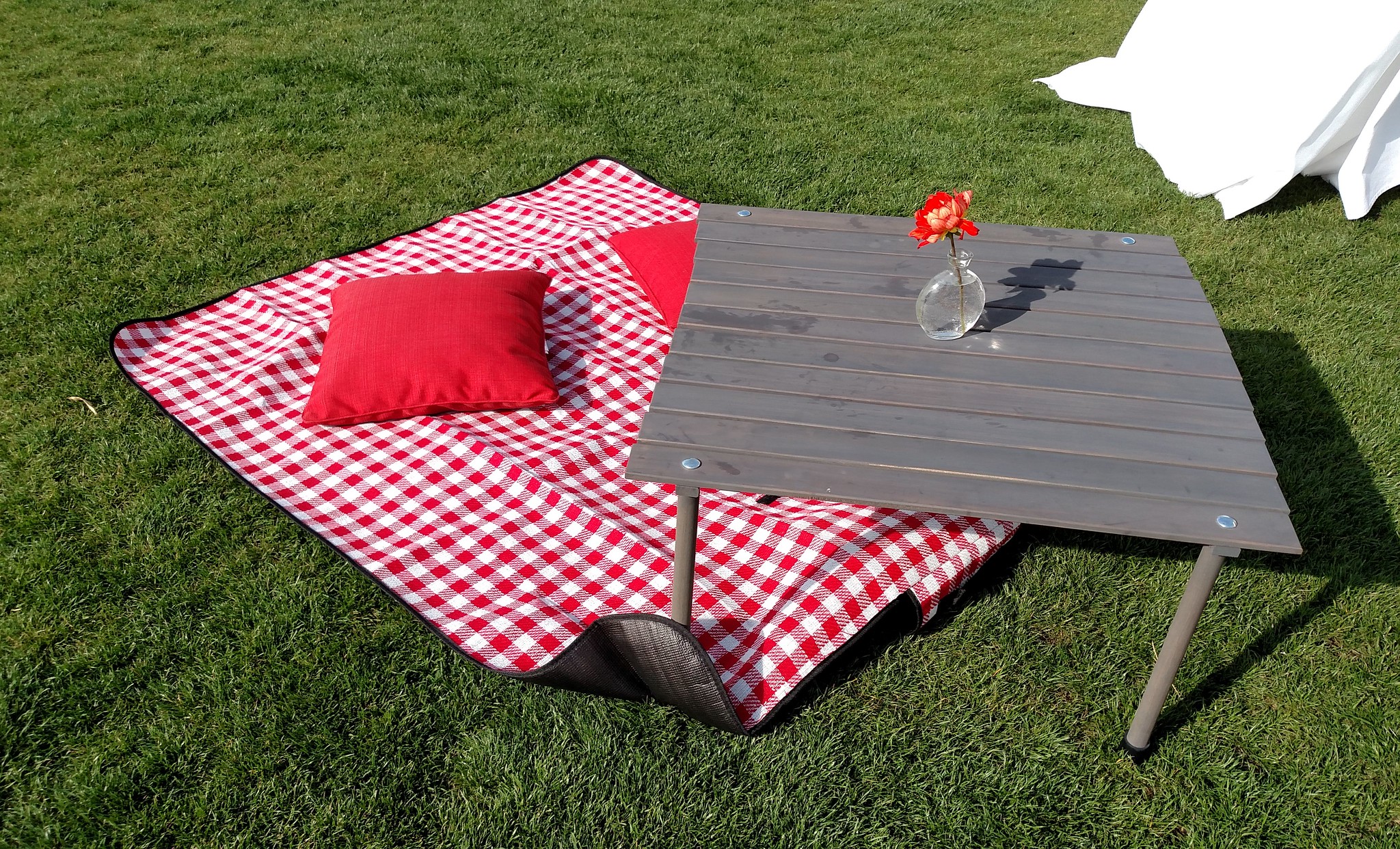 Have your spot staked out for you[/caption] If you’d rather lounge than picnic, you’ve got that option, too. Executive Chef Viet Pham of Ray’s and Stark Bar has a rotating prix fixe menu utilizing the freshest seasonal ingredients for his weekly 3- or 4-course rotating menu ($35 and $45, respectively). It’s available to guests al fresco on the patio or in the lounge adjacent to the jazz stage. Sample menu items include Duck Confit with pickled cherries, Brussels sprouts, duck bacon, violet mustard; and BTO, a fried “Better Than Oreo” cookie with ricotta batter and vanilla ice cream. So whether you prefer to lounge or picnic during jazz, Patina’s got the set-up just for you. They’re all priced out for two people (and in my experience, there was enough food for four), and it’s easier than packing ahead of time and washing the dishes when you get home. It’s also so fancy that you’ll likely get the impressed side-eyes we were privy to a couple weeks ago. (It must’ve been the centerpiece, fried chicken and pillows.) The Louis picnic basket was hosted.

Every Friday through the summer; order at least 24hrs in advance