It's Liquid Spring at The Raymond Pasadena's 1886 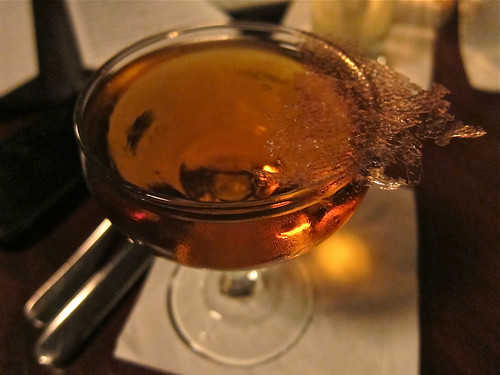 [/caption] It’s rare when I get a full picture of an entire cocktail menu, but it’s even rarer when I’m afforded the opportunity to do so and end up consistently impressed with cocktail after cocktail. The bar at 1886’s recent Spring menu makes it the destination in not only Pasadena drinking, but a go-to for some of the best cocktails in all of LA. [caption id=“” align=“alignright” width=“240” caption=“Pork Belly, Bourbon Aged Maple, Apple, Celery & Chili”] 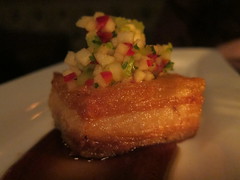 [/caption] Sure, it flies under the radar because of its location, but 1886 has also benefited as a result. Free of the obligation of appealing to overflow traffic, 1886 has the freedom to focus on seriously fun cocktails, akin to the audience the bar has cultivated since its opening in late-2010. The Pimm’s #5 Cup (after previous other Pimm’s versions with other spirits) is a perfect cocktail to head off the menu for Spring. The rye, Bitter Lemon Fever Tree Tonic and housemade Pimms made for a perfect balance, rendering a super-refreshing cocktail just as a Pimm’s Cup should be. [caption id=“” align=“alignleft” width=“240” caption=“The Cinnablossom”] 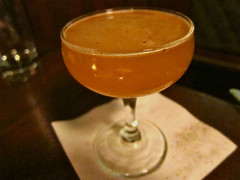 [/caption] If you’re in the mood for their other rye cocktail, go for the 20,000 Leagues - a kind of swizzle made with peach-infused rye, mint, and housemade yellow chartreuse candy (the garnish was especially tasty!). Imagined by Pete Lloyd Jones, this deliciousÂ cocktail was the result of a request by the Pasadena Historical Society to honor residents who were aboard the Titanic. The ingredients were inspired by the Titanic’s own dessert menu. The Water of Life, made by Garrett McKechnie with the Norwegian spirit, Aquavit, homemade Chamomile-Syrup and Noletâ€™s Gin, is the floral tea-influenced cocktail of the season. It’s also a light yet herbal treat and finished off with a sprig or two of Chamomile. [caption id=“” align=“alignright” width=“180” caption=“Bittersweet Farewell”] 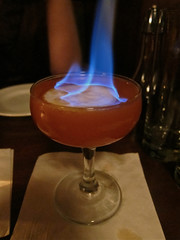 [/caption] The Cinnablossom by Lacey Murillo comes with a cinnamon garnish that is toasted - or flamed - tableside. Gin, lemon juice and homemade cinnamon bark syrup make for delicious gin-citrus cocktail with a subtle touch of spice. One of the best beer cocktails I’ve had in awhile also happened to be the prettiest, which is quite lovely since it’s a testament to how far they’ve evolved. TheÂ Wild Orchid is a shaken cocktailÂ made with Torontel Pisco, Vergano Bianco Vermouth, Grand Marnier and Hefeweissen with the orchid garnish. The effervescence of the beer worked well with the depth of the Pisco, vermouth and Grand Marnier for a really wonderful combination of flavors and textures. The other flaming cocktail on the menu is the Bittersweet Farewell in honor of former 1886 barman, Danny Cymbal’s. A flaming lemon peel floats as an oasis in a shaken concoction of London Dry Gin, homemade Passion Fruit Syrup, lemon juice and Campari. It’s a beautiful gin drink with just the right amount of tart. [caption id=“” align=“alignleft” width=“180” caption=“Rum Whistle”] 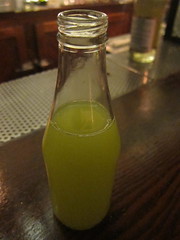 [/caption] The all-out favorite of the night had to be the Rum Whistle, which is basically 1886’s new bottled special and bottled each and every night for a fixed amount to be sold at the bar the next day. It’s not only bottled, but it also has the widest range of appeal; boozers and non-boozers alike will love it. The green apple-celery soda base isÂ spiked with aged white rum and finished off with fresh lime juice before being carbonated and bottled and the results are simply tasty. You may order more than one - not only because you can but alsoÂ because you love it. The Vintage Caprice Flight features three vintages of classic Beefeater Gin Barrel-Aged Caprice â€“ made with Beefeater Gin, dry vermouth, Benedictine and orange bitters and thenÂ aged at 4-months, 8-months and 12-months.Â I wasÂ surprised to find that I actually favored the 8 month vintage over the 12. Older isn’t necessarily better and sometimes, your gin is just done aging. [caption id=“” align=“alignright” width=“240” caption=“Vintage Caprice Flight”] 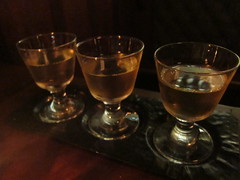 [/caption] The Barrel Roll (title picture) doesn’t just fall under the years-long trend of barrel aged cocktails, it’s also a super tasty rendition of aged Bols Genever, Carpano Antica, Green Chartreuse and aÂ Campari chip byÂ pastry chef Jeff Haines (who also did the Yellow Chartreuse candy). It just so happened to be one of my favorites.Â The chip was theÂ slight sweet touch to the Bols cocktail and made for a strong yet nuanced cocktail. Of course, you’ll need a few bar bites to line your stomach - but the selection at 1886 does more than that. They are daring yet successfully delicious plates, indeed. The musts: Shrimp toast and Lamb necks. So get on over to 1886 right away and drink up. You’ll learn why it’s one of the best kept secrets inÂ Pasadena. All food and cocktails were hosted. Special thanks to Brady Weise.