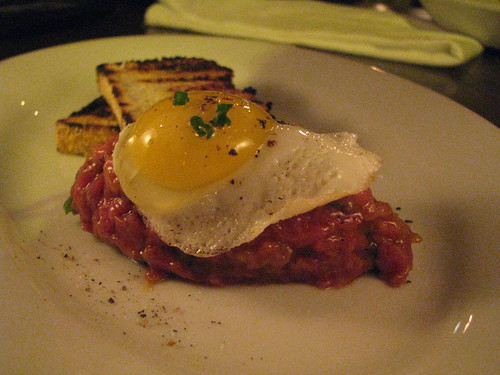 [/caption] It can’t be the easiest time to open a restaurant. While everyone else downsizes, Josef Centeno and Michael Cardenas take the opportunity to fill a niche in Little Tokyo. The aimÂ would be to create a neighborhood canteen. That is, a watering hole with inventive yet casual plates at which you could count on to be there during all stages of your night’s indulgences. They have aÂ permit in the works thatÂ will grant themÂ operating hours that stretch until 3 AM. [caption id=“” align=“alignright” width=“240” caption=“Charred octopus with pickled shallots, lima beans & calamansi vinaigrette”] 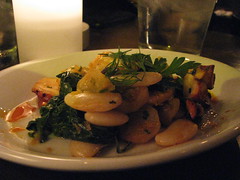 [/caption] Lazy Ox Canteen opens today. With previews going on the past two nights, I was lucky enough (with special thanks to Dawson) to be invited to occupy a spot last night along with Caroline on Crack, Shawn of Blog Downtown, Elina Shatkin, Sinosoul and Tyson, one of Michael Cardenas’ food-loving friends. The atmosphere is warm and inviting with clear, oversized light bulbs and frosted candleholders providing the ambiance. PerchÂ on barstools underneath the red glow of the backlit bar or sit back inÂ your chair orÂ lengthwise booth behind small tables. Choose from a three-tiered menu, split simply into 1, 2 and 3: starters ($4-6), small plates ($9-15) and bigger plates ($20+) that can be doubled as entrees. The manageable brew list commands respect, from the St. Bernardus Triple on tap to Old Rasputen Imperial Stout and Allagash White (my choice for the night). Don’t overlook the bottle list, either - the Japanese “American IPA-style” Ozeno Yukidoke is unattainable anywhere else in the vicinity, confirmed by the back label whichÂ reads “Not for sale: For exhibition use only.” Most of the wines on the list run under $30 for the bottle and exhibit good range. And if your heart so desires, there are also aÂ handful of sakes and shochus available. [caption id=“” align=“alignleft” width=“240” caption=“Cream of pasilla soup with crispy pork belly, red grapes & creme fraiche”] 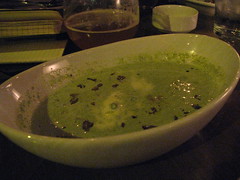 [/caption] Cod brandade fritters is a popular-enough appetizer around town, by now, but surprisingly I could have done with less cod in this incarnation while the breading was a tad too delicate.Â The chicken liver is quite good - that is, if you like chicken liver (period) unlike Caroline on Crack - and prepared in milk for 24 hours leading up to it being plated atop toast and topped with pancetta crisp. The result was a much less pungent taste than I’m used to chicken liver having. The whole-grain mustard it’s served with was a good highlight to the combination. The octopus wasn’t so much charred as it was incredibly tender - I’ve rarely had tako that just escaped chewy, let alone was entirely soft. We found out later that it is actually braised in preparation. The lima beans provided a good accompanying consistency to the dish with the pickled shallots adding a nice briny note. Steamed, mild collard greens rounded the dish out but probably took a little attention away from the octopus. [caption id=“” align=“aligncenter” width=“500” caption=“Brick-roasted mussels with basil, house-made sriracha, white wine & feta”] 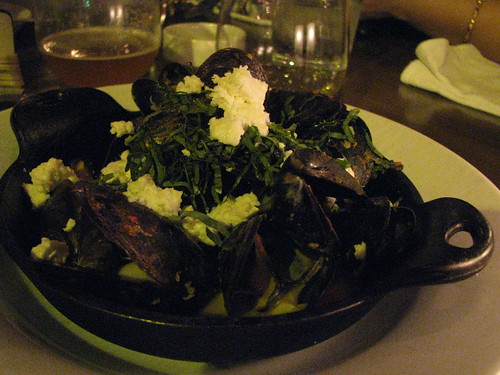 [/caption] One of my favorites was the spicy cream of pasilla soupÂ - the combination of the crispy pork belly (crispy and salty), red grapes (sweet)Â and creme fraiche to completeÂ the creamy consistency of the pool was something I just could not stop savoring!! It was actually served at the same time as the Brick-roasted mussels, another welcomed spicy dish. Truth be told, I love mussels butÂ it’s the quality broth that allows me to thoroughly enjoy them - and this particular one fit the bill. It was distinctive from the pasilla spicyness; its menuÂ listing boasts it is made with “house-made sriracha,” which gave my new friend Tyson and me a little chuckle. “Oh no - not the rooster sriracha, not that!” The redÂ chilis from that special sriracha went well with the basil covering the dish and ultimately reminded me of a Thai soupÂ - withÂ the feta throwing a curve ball into the whole thing. But it worked. When we had finished the mussels, I had to stop one of the bussers from clearing away the pan, just so I could have more broth. [caption id=“” align=“alignright” width=“240” caption=“Braised beef paleron with cream of wheat, kumquats and red wine”] 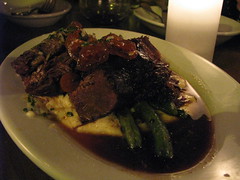 [/caption] TheÂ braised meat dishÂ of the night was a Centeno classic - a pot roast -Â or as Lazy Ox brands, Braised beef paleron with cream of wheat, kumquats and red wine. Yes, cream of wheat - which left me satisfied and thinking twice about necessitatingÂ a potato mash (I also didn’t know it was cream of wheat until looking at the menu)! The sweetness of the kumquats was really nice - providing the variation on what we might come to expect from, say, carmelized onions. Michael clued us in on the fact that 60% of Lazy Ox’s produce comes straight from Temecula, putting emphasis on their farm-to-table menu and support for local growers and their continualÂ influence on the menu. The tender smoked sesame crusted aji had a perfect, crispy skin and was served with a celery and fennel salad that only added to its crunch. On top was a sweet olive-tomato tapenade, a nice note added. Now I’m not well-versed in my beef tartares - starting with the urge to fight comparisons to my local butcher’s refrigerated case - but I actually enjoyed compiling a toast topped with it (seasoned with juniper berry) along with a bit of fried quail egg. It’s a surprisingly delicate bite - if even light - with the heaviest element being the egg. [caption id=“” align=“aligncenter” width=“500” caption=“Tapioca brulee with pineapple szechuan”] 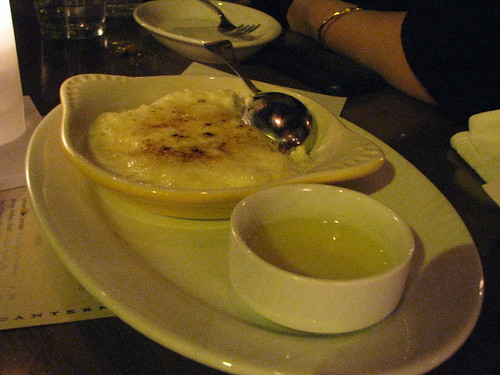 [/caption] On to the desserts - of which my favorite was the tapioca brulee with a pineapple szechuan (sauce?). Of course, my bias rests with my being a bona fide creme brulee fan, so theÂ inspired variation on the torched dessert was a welcomeÂ departure. The brulee actually served as a bit of a textured, eggyÂ canvas for the delicious, subtly-sweetÂ pineapple sauce. It’s lighter than “the original” and the Asian influence here is welcome. The chilled tangerine custard with hazelnut cookie (crumble) was also good, while reminding me of a crumb cake-pudding hybrid: You just can’t go wrong. Overall, I was readily impressed with the inventiveness of the menu and the early-on execution of each of the dishes. Keeping Centeno and Cardenas’ previous successes in mind (Lot 1, Opus; Sushi Roku, Katana respectively), I appreciated the new neighborhood direction they were taking while keeping things surprising, even challenging. I’d come back any other night, whether it beÂ 7 o’clock or 2 AM. Hopefully the latter option will beÂ available soon. All aforementioned food was hosted. 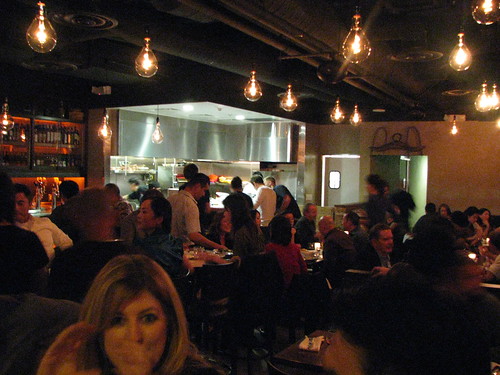