I’m taking a break from my Europe posts for a bit but actually complimenting them, in a way. This time, it’ll be a sort of European auto edition one.

Because I did it. I reserved a Smart Car.

They’re coming to The States in the first quarter of 2008. And, if I go through with the reservation (pending an actual test drive), I’ll be literally halving the curb weight of my Judy Jettason. I’ll be going less than half my current horsepower but there may be some solutions to that in the future–what with people inserting Mitsu engines in the current models in Europe. Somebody’s got to program a chip, no? Less than 1500 lbs. and stocked with a 3-cylinder, 1-litre engine capable of 71 hp and a top speed of 90 mph, the Smart fortwo is perfect for an urbanite like me. That’s what they call us, anyway–their “target market.”

”)I must say, I’m excited about practically being able to pay for the car in cash. And that’s even before considering my gas budget. With my tank holding only 8.7 gallons and my mileage per gallon averaging 40, I think of the fun I’ll have boasting that I budget about $30 towards gas per month.

I love the environment, but even more than that I’m at a point in my life where I want to be content with having “just enough” and trusting that He will always provide if I need more. Options are good, but I’m trying to find even more freedom through sacrificing conveniences in order to contribute to the greater good. It’s the freeing of the mind and being the change that I want to see (credit for that phrase goes to my yoga teacher Hillary).

But the efficiency. I get the shivers just thinking of it. Spending $30 per month on gas in Los Angeles is like a long-delayed realization of the horribly idealized goal of the foundations of this city, a city built upon the concept of modernity. “Modernity,” at the time, meant the owning of one’s own automobile in a city built to facilitate that–since the Ford Model T was a new invention at the time. As we’re all aware, now, with the resulting city being quite vast and spread out, there can never be streets nor highways wide enough to handle that sort of capacity. Population growth happens exponentially and when a city simply adds lanes, more people drive–again adding to vicious cycle of congestion. And so, what do you do in a metropolis built to resist the efficiencies of public transportation? 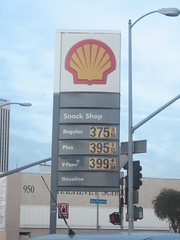 You make the driving experience as pleasurable, spirited and efficient as you can. (Well. I do. But I have never really desired owning an SUV--and there are plenty, here.)

As for the disadvantages, with the obvious exception of cargo and extra passenger space, the issue of safety inevitably comes up. Okay. And if I move, I won’t be able to move myself. ;)

Despite the laws of physics, I’m really impressed with the results of the tridion steel cell that makes up the rigidity of the car. It seems to hold up–even when the vehicle is crashed at 70 mph into a concrete wall. But that’s just it. The natural laws of physics can’t be defied, and there’s only so much the cell can do to dissipate the G forces to be felt by the passengers without mass backing that up. I embedded a video of a crash test demonstration (enjoy the British accent–or the absence of an American one–whichever you prefer):

Yeah, so I’m fully accepting the dangers of freeway driving. And as someone who mostly drives in the city I’m equipped to do that. Pending the test drive, of course. If driving this American Smart Car is not as fun and spirited as it’s chalked up to be, I get my deposit back and lose a few month’s of interest.

I’m willing to accept that. :)

Daimler-Chrysler to sell Smart Car in U.S. on Motortrend