If You Kill Someone 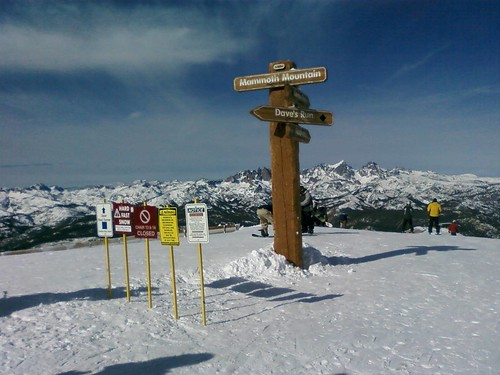 I’d been up there enough times. I don’t really expect people to know this, per se, and well - all reckless behavior should be reprimanded at all times no matter committed by whom.

Apparently, my carelessness was as readily apparent as was slick the OneBallJay wax on the bottom of my snowboard (and actually, my board was really pretty dry). We were at the top of the gondola. I dared rest my snowboard on its flat probably a whole 30 feet away from the edge of Climax - just inside the frame taken above.

Thankfully, Ski Patrol helped bring to light the error of my ways. I call this, Enlightenment.

“Is this your board over here?” the red, black and white-dressed patrolman in ski boots asked me. There were probably 10 other people - total - around the entire landing, which is large.

“Yeah,” I responded. What a funny question to ask, I thought. Maybe I had a limited edition snowboard and I didn’t even know it.

Call me crazy but - bindings down or not - I think overall board awareness at all times is more important. And I think I have that. No upside down snowboard is going to stop itself from going downhill, anyway. Also, no one else was even near me, which might be the only scenario I could think of that might cause someone to haphazardly kick my board 30 feet and over the edge of Climax, the nearest bluff. I carry the sense around me of where my board is at almost all times, including if my snowboard might slide away.

You know, though. He made a simple suggestion. Who am I? Certainly not Ski Patrol.

And then he drops a bomb.

“Because you know, you’re responsible if you kill someone.” The best part about it was there was no expression on his face except a completely deadpan look.

Drunk on “power,” much? Huh. Interesting. Pray tell me, “So what situations would I NOT be responsible if I killed someone?”

No “someone could get seriously hurt at the bottom,” nor a simple “your board could go off the ledge” if somebody even kicked it. But *I* would be responsible if *I* killed someone. Thank you, Ski Patrol a.k.a. Cops on Skis. Don’t hate me because you failed police academy. I know, you get the short end of the stick because instead of getting to set up speed traps as a source of municipal revenue all you get to do is harass innocent little Asian girls about their homicidal snow equipment - but hell if you won’t make the most of it.

You probably live in Mammoth Lakes, Mr. Ski Patrolman, and you have great pride that you’re a local. I completely respect that. And I know there are a lot of us L.A. punks who come up every weekend and ruin all y’all locals’ traffic on Old Mammoth Road to have you eagerly anticipating every winter Sunday night when we finally leave town and go home. I apologize for that. But who’s supporting your businesses? I do my best not to act like the Urban Cowboy Hipster who comes into town and thinks she’s all high and mighty over you Funny Mountain People. If I had the guts I’d move to Mammoth for a couple years, myself, so really - you have my props. And I try and be courteous and respectful in all local establishments, I swear.

I respected Mr. Ski Patrolman’s God-given authority rolled my eyes. This particular season pass holder certainly does not plan on killing anyone this particular trip in Mammoth, but thanks.