I Can't Even Cook Virtually: Food Network's Cook Or Be Cooked Video Game 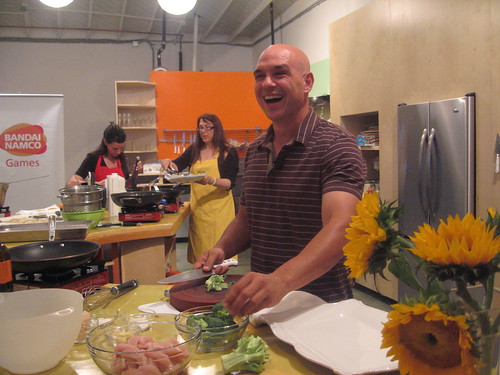 A video game that teaches you how to cook? I was skeptical, but I’d long ago dropped off the gaming dabbler grid. Besides, there really is no topic untackled by the gaming industry anymore. The grey area between social (e.g. Facebook quizzes) and core gaming (e.g. WoW) is growing wider and wider and Wii is just the console to facilitate that. 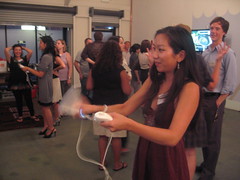 Also at Hipcooks West for our special night was Caroline on Crack, Neil of Food Marathon, TaraMetBlog, FoodGPS, and Lindsay of LAist. It was a fun night of canoodling and game play.

Iron Chef and James Beard Award-winning Michael Symon was there to try his hand at cooking alongside the game, called Food Network: Cook or Be Cooked! by Bandai Namco. I was hoping for a really complex dish so Symon’s virtuosity could at least be partially displayed - to make things interesting - but he ended up making broccoli and chicken, one of the medium difficulty recipes in the game. The lead developer, Michael Morishita, was there to play the very game he programmed. What was interesting about this arrangement is that you could see for the most part that the game takes into account real cooking disciplines such as multi-tasking. All right - also, simulated dicing, stirring and flipping - and even heating up the pan before you cook in it. Michael’s bubbly-yet-down-to-earth personality made the demo really fun to watch as well.

There was nothing “strictly social” about this game, however. It took me forever to make an easy recipe - that dish being spaghetti and meatballs - and once I had finally finished, the judges took a bite and started turning over chairs and heaving over the table. Virtually. And I was literally bad at this game. Meh. My excuse? I was busy stuffing h’ors doeurves (recipes from Chef Symon himself) in my face while playing the game. It’s called priorities!

If I had a Wii, I might use this as a launching point since heck, I need all the help I can get - including the basics. It’s almost like your own personal cooking teacher. The main drawback: You don’t get to eat what you cook! Or in my case that might be a perk.