Highlights of Plate By Plate, 2011 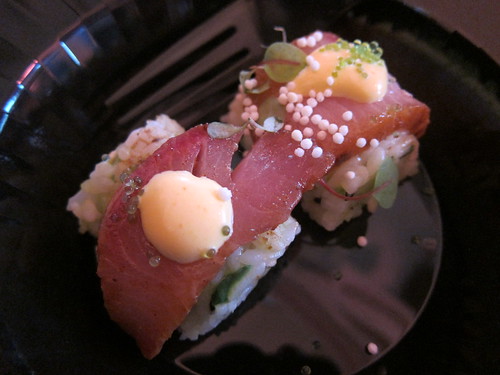 [/caption] Tasting events come and go, but Plate By Plate is one of those events that I’ve made sure to frequent every year. The proceeds of Project By Project’s annual benefit go towards a particular partner chosen for that year like this event’s Asian Youth Center. It also doesn’t hurt that the selection of participants is top-notch in comparison to many other events that I’ve attended over time. [caption id=“” align=“alignright” width=“240” caption=“Hamachi, Uni Russian Salad, Yuzu Kosho - Laurent Quenioux”] 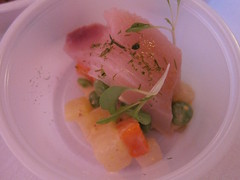 [/caption] Its focus on benefiting Asian non-profits flavor the event with entertainment such as modern dance and singing performances. Club beats pulse between the performances, perforating every bite. The Vibiana, with its high ceilings, is concurrently flooded with pink and white lights. And wherever Plate By Plate is, it’s always the site of the most successfully-executed-yet-unspoken dress code of the year. The chefs are the ones most expected to wear jeans, here. The good news is that they all seem really amped to be at Plate By Plate. The answer to that age-old (in blogosphere time, anyway) question of “Why Are There So Many Asian Food Bloggers?” - if one were to ask it - lies in this event. The vibe is positive and the camaraderie, despite the pounding soundtrack, is warm. [caption id=“” align=“alignleft” width=“240” caption=“Gavin Mills and wife Jessica (Wood & Vine)”] 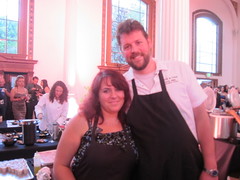 [/caption] And then there were many ofÂ my L.A. favorites - allÂ in one room. MyÂ profile on Laurent Quenioux at Vertical Bistro had just run in the Pasadena Sun (yay! I’m in print!), and he brought his delicious sweetbreads and hamachi to serve up to Plate By Plate participants. Gavin Mills, who helms my neighborhood favorite, Wood & Vine, was there to present a wonderful charcuterie spread. I’d be hard-pressed to name one other Hollywood eatery which makes their own pates and rillettes in-house, and Wood & Vine’s are really good. Picca Peru was on-hand to serve their ultra comforting Chicken Cau Cau. The Royce of Pasadena’s The Langham Hotel, under David Feau, platedÂ pieces of Wagyu “Au Poivre” with a baby pearl onion. It’s pretty hard to argue with wagyu, but there was a certain elegant savoryness to this particular version. [caption id=“” align=“alignright” width=“240” caption=“Wagyu “Au Poivre” - David Feau of The Royce”] 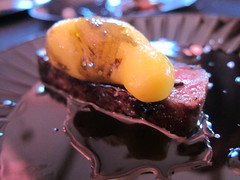 [/caption] The surprise of the night was The Gorbals’ Beef Tongue with Romesco. It was certainly the most tender - despite beingÂ thick -Â slice of tongue I’ve had. While I’m not a squeamish or picky eater, I can’t say that tongue has ever been a favorite “cut” of mine. But I was pretty shocked at how much I enjoyed this rendition. The delicious romesco sauce, of course, was no detail - so bravo. Of course, the beautifulÂ Bricia Lopez was in attendance to represent La Guelaguetza. They served up their famous Tamales OaxaqueÃ±os with chicken and mole. It’s always a festive time at Plate By Plate. The food and drink (complete this year with a mixology demo by Julian Cox) are always prime and the company in full garbÂ is always colorful. If you are keen on taking a break between bites and sips, there are also really impressive silent auction items with low starting bids on the block. It’s pretty much the sleeper event of the year. See you next time.