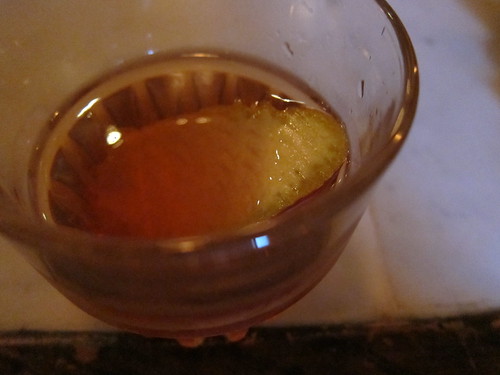 [/caption] You may be familiar with my previous Hatchi mentions, with each rendition featuring a high profile chef from around Los Angeles. The series at Breadbar has upped the ante for May, however, and will now be featuring the best mixologists on a monthly basis for, again, one night only as “Hatchi Mix” debuts on Thursday, May 6th. The menu will feature cocktails priced at $8 each, made by the featured mixologist of the night. Kicking off the series is Devon Espinoza from Abbot Kinney’s Tasting Kitchen, who offers his â€œVive le Cocktailâ€ concept featuring pre-Prohibition libations - like the Sazerac, which is arguably America’s first cocktail, dating back to pre-Civil War New Orleans.Â Also on the menu: The Martinez (gin, vermouth, maraschino liqueur), by the legendary bartender Jerry Thomas in San Franciscoâ€™s Occidental Hotel during the late 1800s; the Manhattan, called the father of the Martinez and the grandmother of the Martini; and The Last Word, a Prohibition-era drink with gin, lime juice, Chartreuse and often with maraschino liqueur. With a menu like that, it’ll be hard to pass this Hatchi Mix up. But keep on the lookout for future guest mixologists, like Joel Black of the CaÃ±a Rum Bar at The Doheny, highlighting Rum cocktails on June 3, andÂ Julian Cox of Rivera, with a focus on Tequilas on July 1. (Mmm…I hope that includes the Barbacoa.)