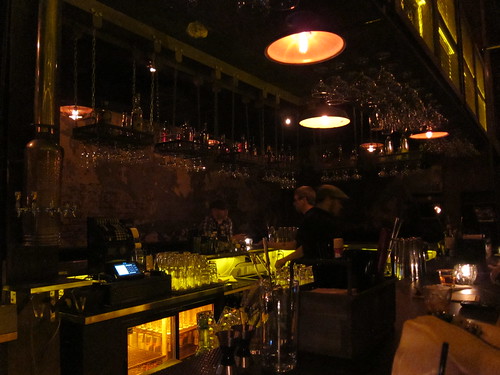 [/caption] If you were to hear that the guys behind La Descarga are opening up a new bar, it’s high time to put the opening of said bar on your calendar. So, that’s what I did. I was happy to find out in the process that Harvard & Stone is the next-best thing to walking distance from my digs; it’s two Metro stops and a skip away. And when I visited the WWII-esque barÂ last night for the opening, I found out it’s actually across the street from Sanamluang - thatÂ Thai establishment holding remnants of collegeÂ nostalgia andÂ my go-to place for Pad Kee Mow. It’s also open until 3 AM. [caption id=“” align=“alignright” width=“240” caption=“Mia Sarazen says, “You Can Do It!””] 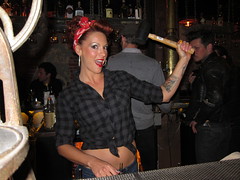 [/caption] I see cocktails and late-night Thai food in my near future. Back to Harvard & Stone, so-named after the intersection of Harvard and its stone exterior on Hollywood Boulevard: It’s a beautiful space. Though Steve Livigni corrected me about the decor: “Oh, it’s contrived,” I offered that it did a great job pretending that it wasn’t (it’s all in theÂ incandescent lighting). He finally agreed. The distressed walls with exposed brick frame a centralized, rectangular front bar lined with old, hanging metal shelves suspended by chain links. Liquor bottles artfully sit atop them while glasswares hang below. Antique pieces likeÂ obsolete, rusty machinery and light bulbsÂ are scattered along the bar and in display cases on the inside wall. High-top, metal tables with rusty rivets line those cases, should cocktailers want to be near the action but not right in it. By the door is a stage on which Livigni welcomes bands to perform should the “impromptu show” mood strike. Keep an eye on this place for any post-show after-parties. Before Harvard & Stone, industrial never seemed so hip. [caption id=“” align=“alignleft” width=“240” caption=“Back Bar”] 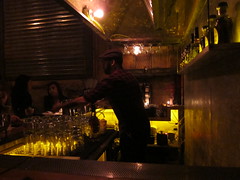 [/caption] In the back corner is an old, rusticÂ fireplace where guests can crowd around and across the way, a private room partitioned off by antiqued, double sliding doors. And I can’t wait to peep the balcony, which wasn’t ready for the opening, but which also extends into the back “Test Kitchen” bar area which is half-open and coded for smoking. (Fortunately, there’s also a dedicated, narrow outdoor smoking patio, Eastside bar-style, for the committed smokers.) But, oh…that Test Kitchen bar in the back! Every month, a certain spirit (February: Whiskey, March: Gin) will be featured in the cocktails on its unique menu, which is to change daily. Whatever the spirit, American distillates are the focus. According to Caroline on Crack in her LA Weekly Squid Ink article, this bar will also “stock a small menu of tequila, cognac and rum as well as recognizable brands.” For now, you can count on Elijah Craig, Fighting Cock and Evan WilliamsÂ Bourbon to be stocked here. [caption id=“” align=“alignright” width=“240” caption=“Pablo Moix”] 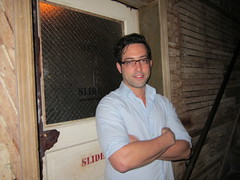 [/caption] The cocktail menu earns its Eastside cred with an Appletini Apple Martini made with Original Moonshine (apple syrup, lemon juice, whiskey barrel bitters). If using Moonshine to formulate a normally fru-fru, girlyÂ cocktail isn’t hipster, I don’t know what is (try: being a block away from Jumbo’s Clown Room). You also have a lot of other cocktails to look forward to if you go in the near future - not discounting their inevitably delicious successors, of course. Steve also said that the menu will likely double in size once they get the opening kinks out.

The cocktails are all $8-11 each, which, for the ingredients and labor involved, is a steal once you taste your drink (all delicious on opening night).Â I’m hard-pressed to name another mixology bar that charges less than $12 per cocktail off their regular menu. So Eastsiders: Rejoice! Harvard & Stone is open for business. You never know what cocktails are in store for you on the back bar menu nor if a band will drop by and play a surprise show. It’s just the place to enjoy a great cocktail in an industrial-chic setting, without the attitude. I cannot wait to make this my neighborhood spot.