Half Moon Bay, CA: Navio at The Ritz-Carlton 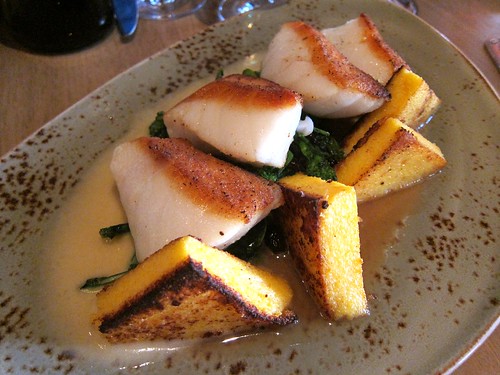 Fennel Pollen Crusted Mero Sea Bass[/caption] When you visit an outpost of such a well-renowned hotel entity as the Ritz-Carlton, its flagship restaurant has plenty to live up to. And with a location and view right on the shore at Half Moon Bay, the food better be a match to its scenery and splendor. Navio lives up to the task thanks to Chef Sean Eastwood’s imaginative dishes with ingredients sourced from nearby markets, but this is the Ritz-Carlton, and they have come to expect a certain clientele that can afford the high-end ticket - the kind of clientele that also subscribe to the mantra of “location, location, location.” With that: Scenery. [caption id=“” align=“alignright” width=“240”] 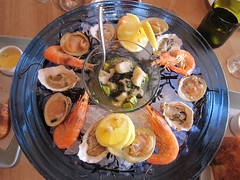 Navio Seafood Platter[/caption] Though without a reference point as it was my first visit, I found myself really enjoying the tasteful and luxurious nautical design of the newly remodeled dining room of Navio, a bit of a selling point to make the trip. As with anything, beauty lies in the details. Sea shells cascade down irredescent blue tiles framing the entrance and white rope knots hung from chrome throughout, but a beautiful wood planked, hull-like ceiling runs the length of the restaurant. You’ll definitely want to start off with the Navio Seafood Platter, a raw platter of littleneck clams, West Coast oysters on the half shell, poached prawns and an especially delicious Halibut ceviche. PEI Mussels come in a choice of two preparations: Parisian, with shallots, garlic and Sauvignon Blanc sauce; and Thai, with carrot & ginger broth. We received the latter, which had more carrot than anything. [caption id=“” align=“alignleft” width=“240”] 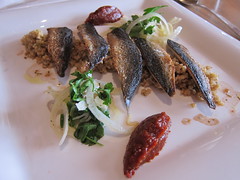 Sardines a la Plancha[/caption] There were a couple of appetizers that were solid, as I actually enjoyed these more than the mains. Togarashi Spiced Ahi Tuna with Yuzu Aioli, Pickled Carrots and Seabeams, Puffed Wild Rice and Asian Pears as well as the Sardines a la Plancha, Bulgur Wheat Panzanella, Spicy Tomato Jam and Fennel-Parsley Salad were both pleasing in textures and tastes. There were pleasantly crispy, earthy, and fruity notes to both of these. The body of the menu, the entrees, features fish filets where the price points may prove somewhat contentious. Of them all, the Fennel Pollen Crusted Mero Sea Bass was the most delicious. The rapini and feta polenta cakes went nicely with the crusted filets of sea bass, and the milky white beurre blanc sauce brought a luscious coating to the overall dish. 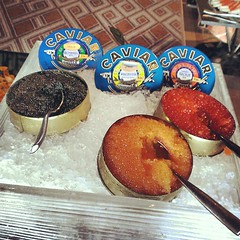 “AYCE” Caviar[/caption] The daytime Sunday offering of Navio is worth noting, since it is the site of probably one of the most well-known Sunday brunches in the Bay Area. At this $95 per person brunch and probably no other, you’ll find three caviar tins over ice for the taking. No less than eight quality cheeses, mostly French, and eight varieties of charcuterie, mostly Spanish, will please you at the beginning or end (or both) of your buffet. Crab claws, littleneck clams, Fanny Bay oysters, prime rib, lamb loin and maybe even the most basic sushi are also highlights. Your only nemesis will be your inability to eat more than what you deem your “fair share.” This could be the most extravagant buffet this particular side (shall we say, “to the northwest?”) of Vegas. All food and wine were hosted. The Ritz-Carlton HMB also hosted me for two nights.