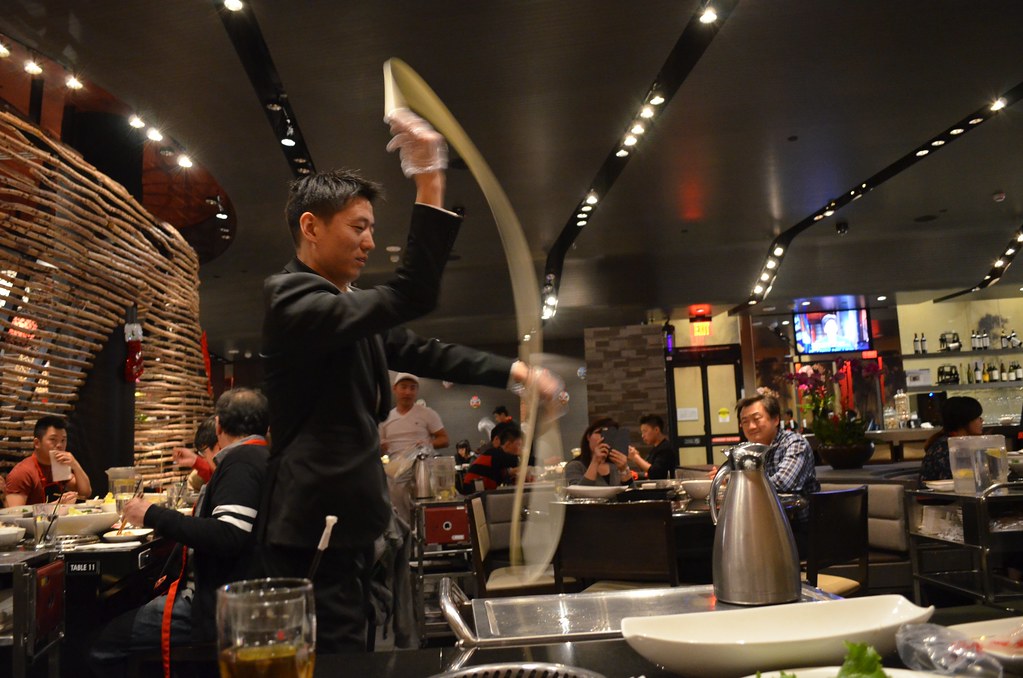 Dancing Noodles at Hai Di Lao[/caption] In partnership with Westfield Santa Anita. Memories of hot pot have always involved family and friends around one or two boiling pots of broth on hot plates, set upon the dining room table and enjoyed over conversation, often during the holidays such as Lunar New Year. Sometimes, it was simply the way my mom handled a meal when there were going to be a lot of people coming over for dinner. Raw cut meats, vegetables, bean thread noodles, and tofu were laid out on the table, waiting their turn to get dunked, cooked, then retrieved before being dipped into a personal bowl of XO sauce beat with a raw egg, and eaten. [caption width=“1024” align=“alignright”] 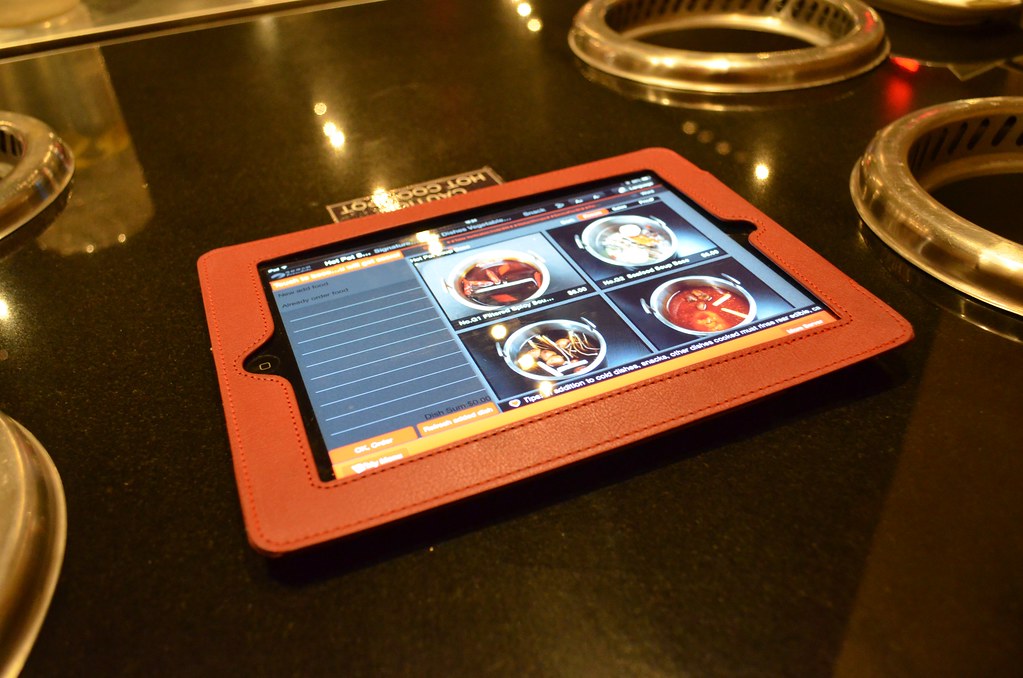 Ordering on an iPad[/caption] Since I could count the number of places offering Asian cuisine in the parts where I grew up on one hand, it blew my mind upon moving here that the San Gabriel Valley actually offered this experience in as a dine-out affair. Now, there are numerous hot pot offerings around Los Angeles, with different styles originating in different regions of Asia. It had been awhile since I’ve had hot pot, much less at a restaurant. So I didn’t expect the particularly posh experience that I got at the Sichuan-style Hai Di Lao, a fabulously animated restaurant offering at the Santa Anita Mall in Arcadia. It’s the only Hai Di Lao location outside Asia, so you know that there has to be good reason for the export of the hot pot restaurant chain. [caption width=“1024” align=“aligncenter”] 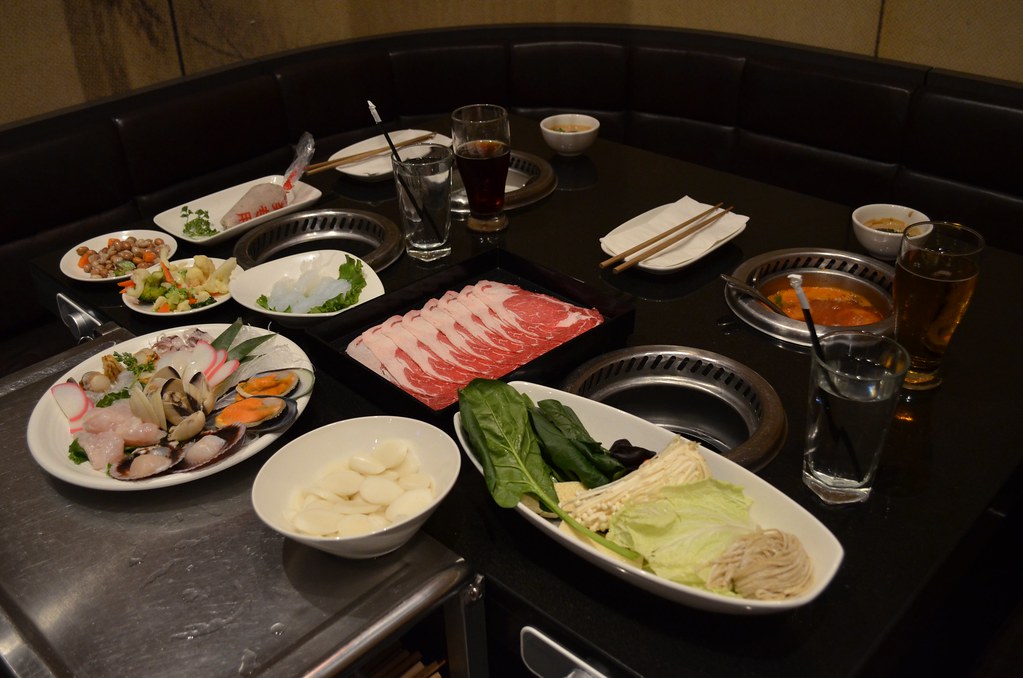 The Spread[/caption] This is a Chinese restaurant that actually prides itself on service - a rarity to those familiar with bargains to be had with excellent Chinese food but also the trials of flagging down servers or simply getting waters all around for their circular table of 10, whether at dim sum or a multi-course dinner with fried crab. First of all, gone are the days of that communal service model; each table at Hai Di Lao has a designated waiter.  [caption width=“1024” align=“alignleft”] 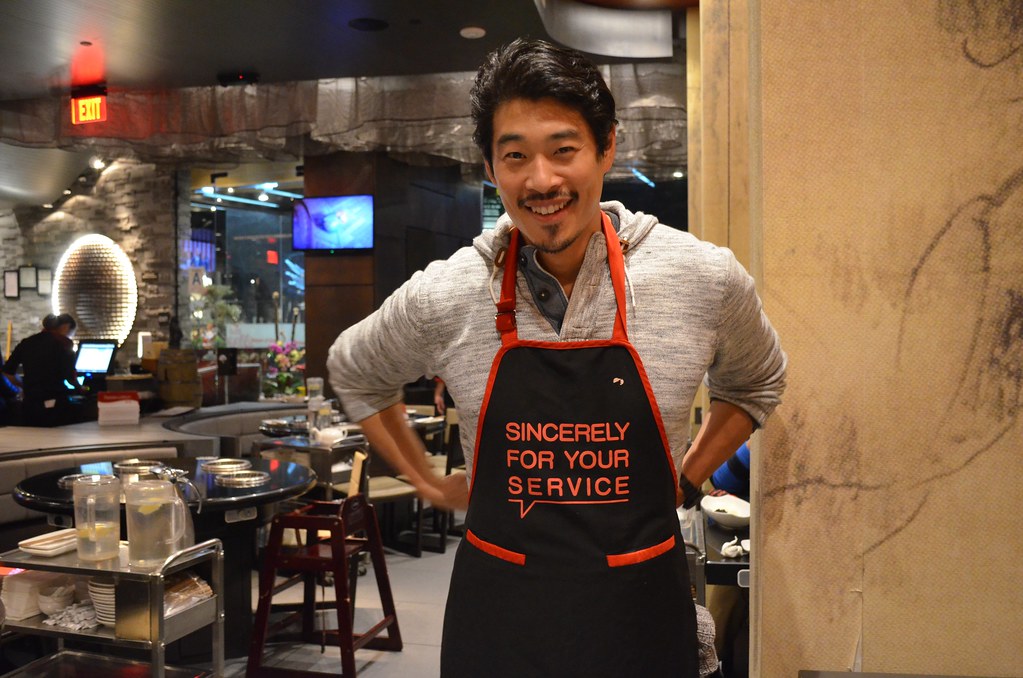 Hot Pot partner Tim in Chingrish apron[/caption] And despite how messy and ultimately casual a hot pot experience can be, Hai Di Lao not only lends aprons to all diners, but also provides plastic bags in which diners can store (and operate) their cell phone, optical wipes with which to clear their glasses, and hair ties with which to hold back hair, clear from the boiling pots. And you haven’t even ordered, yet. There’s also an elaborate sauce bar with recipes for different combinations in which to dip your meats, vegetables and more. Or, your server can concoct each sauce for your convenience, a task for which I gladly gave up the reins. Want a tangy sesame sauce? Or a chili sesame oil spicy sauce? You can make it here. Or, you can come up with your own. [caption width=“1024” align=“alignright”] 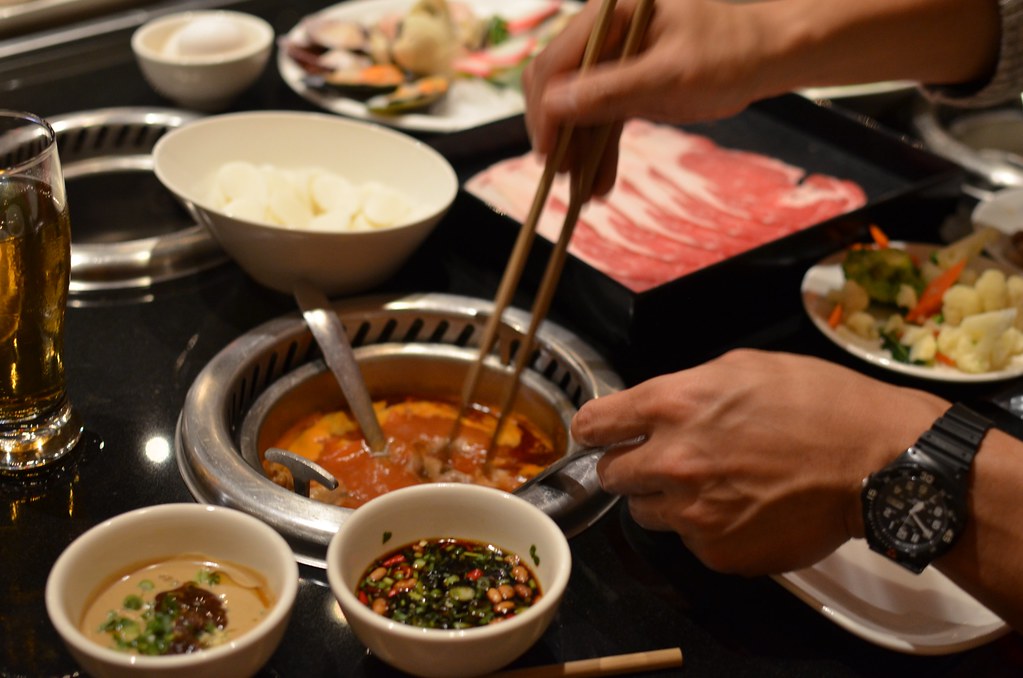 Stirring the Tomato broth pot[/caption] Ordering is done on iPads, through scrolling through each menu and choosing broths, meats, vegetables, combos of both, noodles, side dishes, and more. Luckily, your server will be nearby to explain all of it. There are five different available broths, but the crowd favorite is the Tomato Pot, a really flavorful broth that was surprisingly un-sweet. We also went with the Delicacy Pot, a traditional pork broth flavored with ginger and other herbs. Heat lovers will clearly want to go with the Sichuan Pot, while milder flavors are afforded by the Mushroom and Seafood Pots. Add in a raw egg for dipping sauce purposes. [caption width=“1024” align=“alignleft”] 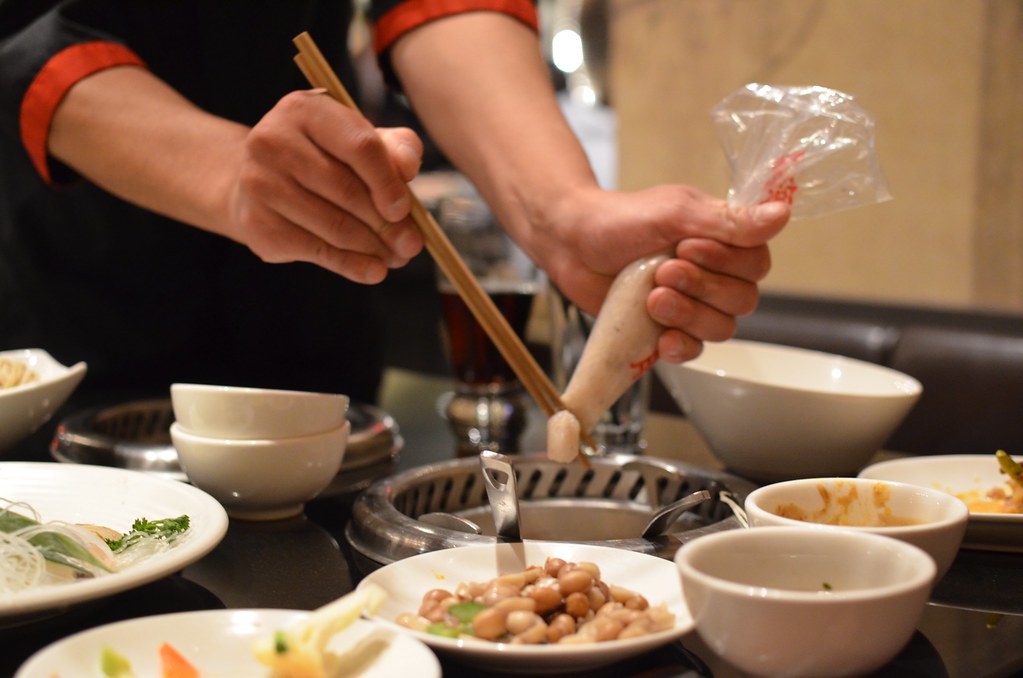 Shrimp Ball Making[/caption] The bounty of meat and seafood options to cook in your chosen broths is almost overwhelming. Cuttlefish, beef, not only shrimp balls but shrimp ball paste in a piping bag, scallops, abolone, fish, lamb, beef, tofu, rice cakes and mushrooms - it’s all yours at the touch of a screen. When it comes to the noodles, however, you’d be remiss if you overlooked the $4 Dancing Noodles. A skilled dancer pulls strands of noodles in view of and for the entertainment of everyone at the table. The noodles ultimately land in your pot of broth, absorbing its flavors only to be further accentuated by your dipping sauce(s). I loved the fresh chew in the noodles. The whole ritual is most certainly the centerpiece of a Hai Di Lao experience, and the $4 price tag further cements these noodles as essential. [caption width=“1024” align=“alignright”] 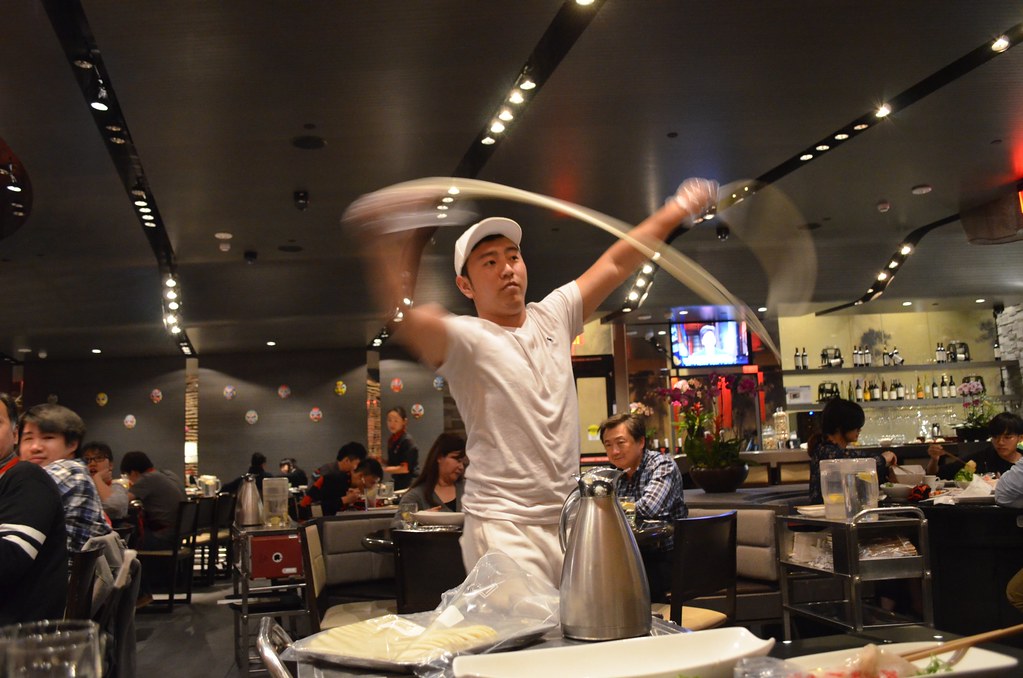 Dancing Noodles[/caption] Experiencing Hai Di Lao with your friends and/or family in celebration of the upcoming Lunar New Year would be a great prelude - or conclusion - to the upcoming Westfield Santa Anita event on Sunday, February 15th, from 12 - 5 PM. They’ll be having a meet & greet photo op with Hello Kitty herself, a Hello Kitty Cafe truck, traditional entertainment with a lion dance to live music, do-it-yourself zodiac masks and red envelopes, Chinese calligraphy, fortune telling, games, prizes and of course, a drawing courtesy of the Japanese American National Museum. Check out the Facebook page for details. And since I’ve partnered with Westfield Santa Anita expressly for this event, I’ll be there, too. So RSVP on the Facebook page and I’ll see you there! Tag your posts with #WestfieldLNY [caption width=“1024” align=“aligncenter”] 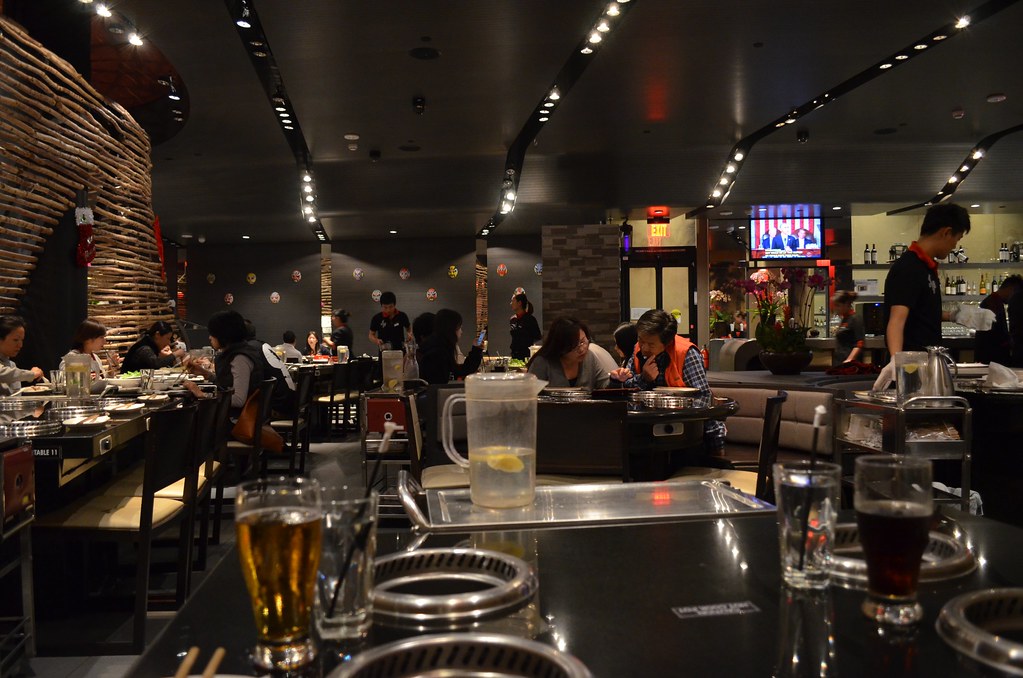 Hai Di Lao[/caption] All food and drink were hosted. When all was said and done, however, we spent about $50 per person including a couple beers, tip and tax and were full.