After work, yesterday, I played some good ol’ GHII. I managed to get 5 stars on Nirvana’s Heart-Shaped Box with 98% accuracy and over 300,000 points on expert difficulty. Remains to be seen, though, whether I will have the motivation to buckle down in practice mode to score just 4 stars on the bottom of the list, like Megadeth’s Hangar 18. Right now, I get a kick out of just passing it after deciding to play it on a whim. It gives me a strange sort of high. It’s like I’m reading music, again.Â Yes, seriously. We’re actually pretty close to having 4 stars (sometimes 5) on all the songs in expert. 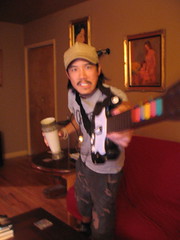