Greenspan's Grilled Cheese Serving Up Classics and Much More 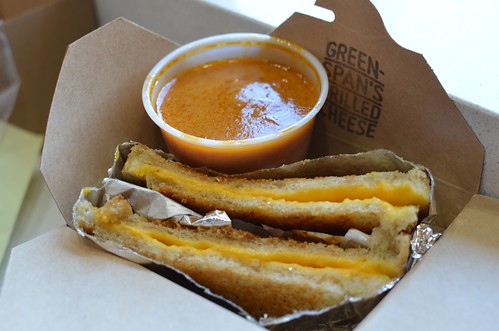 The Classic with Tomato Basil Dip[/caption] As April and thus, National Grilled Cheese Month, comes to a close, I have come to realize that: 1) This classic sandwich needs no one to vouch for its deliciousness the rest of the year, and 2) Who has time to keep track of the celebratory day or month of every food in existence, anyway? (Oh right: Thank you, PR pitches.) After all, the sandwich has had its own Invitational here for years on end, to somewhat sadly conclude this year as we food enthusiasts find other foods and combinations of food to fawn over. But let’s not forget that as there have been multiple storefronts dedicated to cupcakes and only cupcakes, for a very long time, dedicated grilled cheese slingers has also become a thing. [caption id=“” align=“aligncenter” width=“500”] 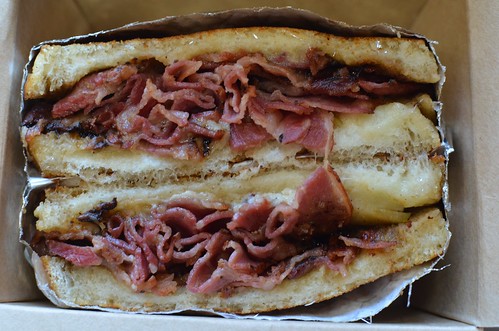 Johnny Apple Cheese - Pastrami, aged white cheddar, apple mustard chutney on sourdough[/caption] But none like Eric Greenspan’s. At his new standing-room-dominant space appropriately named Greenspan’s Grilled Cheese, Chef has ever so ingeniuously carved out a new niche at his home on Melrose Avenue where The Foundry, the 9-year-old restaurant legend, once stood. “Yeah, I think L.A. is ready for this,” Greenspan muses, in a sort of LA-vs-NY comparison. “Before, like more during The Foundry days, it was like, ‘Where do I sit?’” [caption id=“” align=“alignright” width=“240”] 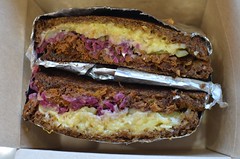 Cuban Rueben[/caption] He’s leased out the majority of the space to Melrose Umbrella Company, an extremely lovely bar with Housemade Fireball and Fernet on tap, complete with a streamlined but well crafted cocktail menu by Zachary Patterson, Julian Cox, Josh Goldman and Paul Sanguinetti. The entire grilled cheese menu is prepared next door and served at Melrose Umbrella, perfect to pair with the excellent cocktails being poured at the bar. “I don’t know how to run a bar. These guys really know how to run a bar,” Greenspan confesses. And then there are the grilled cheese sandwiches themselves. We’ve got the Med, with goat cheese, tomato, artichoke over challa bread. Buffalo wings lovers will love the Buffalo Blue, with fried chicken tenders, blue cheese and a spicy celery-carrot slaw over rye. [caption id=“” align=“alignleft” width=“240”] 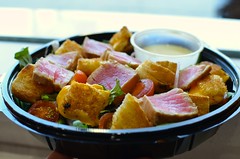 Rocket Salad with Ahi Tuna[/caption] If you like your grilled cheese extra hearty, order the Cuban Reuben, made with pulled pork, gruyere, mustard and pickles over pumpernickel bread. Probably my favorite non-traditional sandwich was the Johnny Apple Cheese (as in a Johnny Pastrami) with pastrami, apples and an apple mustard chutney to balance out the saltiness of the pastrami - served on sourdough. Which, of course, leads me to my favorite: The Classic. But of course. It’s expertly prepared, as far as butter, bread, cheese, bread and more butter goes (they have wall art expressing exactly this), but of course as with anything the magic is in the simplicity, stupid. Chef Greenspan says, “All these chefs were asking me, ‘Hey! What kinda equipment do you got back there!? Do you have a new something-or-other-machine?’ I just said, ‘…a sandwich press!?’” The trick is to order the awesome tomato basil soup along with it, whether as a dip ($1), cup ($3) or bowl ($4). Coupled with a classic grilled cheese at $3.25, and you’ve got an awesome lunch for less than $5 in 2014. [caption id=“” align=“alignright” width=“212”] 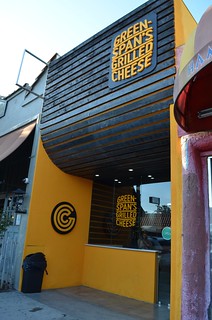 Storefront[/caption] If you’re into salad, the kicker is that the “croutons” are actually dried out mini grilled cheese cubes instead of bread crumbs. It’s novel, and you’ll want to add ahi tuna or bacon to one of those salads (rocket, beet and kale), naturally. Don’t forget to order one of the housemade sodas; they’re fizzy delights with which to wash down all those other flavors. Blood Orange Creamsicle? Check. Pineapple Casis? Check. As for sides - besides the tomato basil soup, that is - try the Latke Bites. Pure, shredded potato goodness fried up into a ball. It comes with an apple créme fraîche to dip in - just a little bit of sweet to your undoubtedly savory meal. We’ve got a few months until the speakeasy fine dining space, the culmination of all of Chef Greenspan’s ambitions, experience and tutelage, opens up in back. And when it does, you’ll have to enter through Greenspan’s Grilled Cheese just to get to it. Until then, we have plenty of sandwiches and cocktails in the front to keep us happy and sated. Grilled cheese forever. [caption id=“” align=“aligncenter” width=“500”] 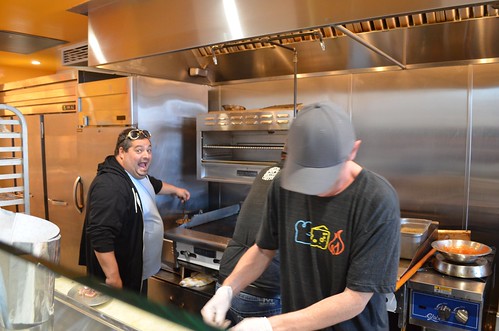