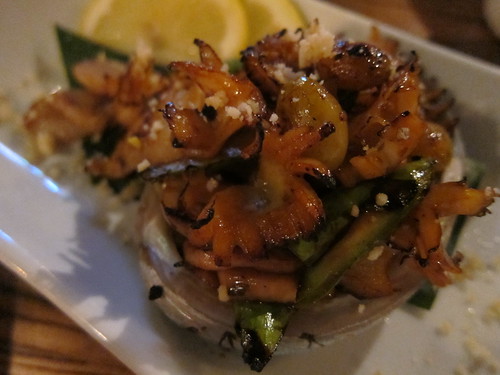 [/caption] I arrived to our 7-top reservation on account of an invitation from Josh of Food GPS, but only after first following the noise and crowd into the very popular Don Dae Gam, which was located in the same plaza. I turned to each occupied table (they all were), and when I didn’t recognize one face I went back out the door. [caption id=“” align=“alignright” width=“240” caption=“Sliced Daikon “Taco””] 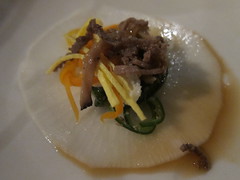 [/caption] At LaOn, we were one of two parties total that dined there in the duration of our feast. As the only non-Caucasian in the party, I had also learned that before I arrived, the servers verified repeatedly that indeed, this was the restaurant at which they wanted to be, and not next door. Don’t judge a palate by its cover… As each cooked or uncooked dish arrived in the practically empty restaurant, it became apparent that we were one of the first to discover this little gem. The best thing about our big party was that we were able to order a lot to ensure getting a bite of everything while not leaving a scrap by the time we were finished. [caption id=“” align=“alignleft” width=“240” caption=“Steak Tartar”] 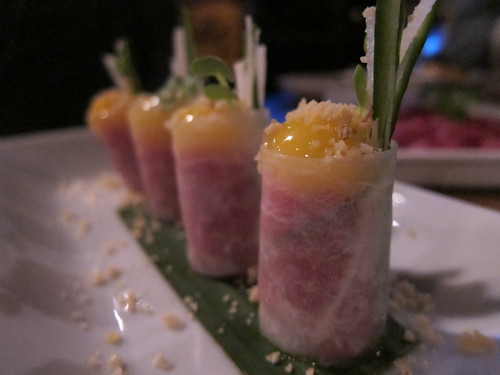 [/caption] With the same people behind Park’s BBQ masterminding LaOn, this surprisingly pleasant dining space - though furnished with the obligatory fans above each table - isn’t the spot to court your singularly focused meat-minded friends (often the stigma I’ve found associated with Korean food). Sure, you’ll get an on-table iron charcoalÂ grill on which to cook your skirt steak, beef tongueÂ and skewers (the bacon-wrapped duk, or tubular rice cakes, are a must), but you’d really be missing out if you overlooked the peewee fingerling potatoes in green pepper & green chile sauce to start, the pork/egg/shiitake/cucumber/carrot wrapped in daikon “tacos,” the rice paper-wrapped steak tartar topped withÂ quail egg,Â the garlic abalone dish, the roe-uni stone pot riceÂ … I think you get the point. [caption id=“” align=“alignright” width=“240” caption=“Bacon-wrapped Duk, Sausage and Onion on the Grill”] 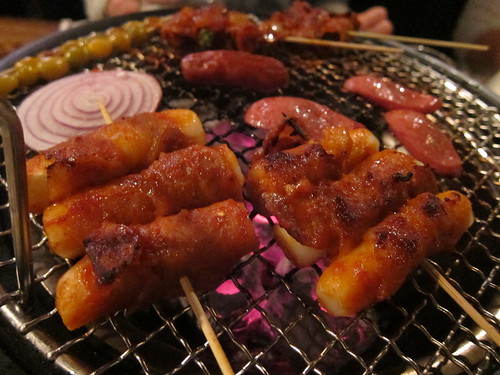 [/caption] With the only included banchanÂ being pickled, thinlyÂ sliced cucumbers and more-than-decent kimchi, it’s clear that this isn’t a Korean restaurant that rests its laurelsÂ on filler. But the servers and chef/owner wereÂ more than courteous - even friendly. Now gone are the days where I had to “corner a Korean” (UCLA proved useful for this) just so I could have a go-to guy that could order for me without the awkwardness of the language barrier and risk of being taken a less-than-courageous customer.Â A nice surprise was a dish that we hadn’t ordered but was gratefully sent out: AÂ kind of chapchae, butÂ made with rice cakes, instead. I would definitely classify this as a staple and would order this next time. The best part about it? The raw cuts are of quality whileÂ LaOn’s location and audienceÂ in Koreatown prevents the BBQ as well as theÂ small plates from being too precious. Just make sure that in a party this big, you order 2 of most things. Proof: By the end, we were stuffed, and had only spent $34 per person including tax,Â just oneÂ bottle of wineÂ and 20%+ tip (no dessert). So go forth and visit LaOn. “Small plates” is the arguably hackneyed phenomenon these days, but this little Don Dae Gam-adjacent place in Koreatown is a stand-out gem that does it all so well.Â And for those cravings of theÂ Americanized KoreanÂ tradition of BBQ - there’s more than enough to go around.