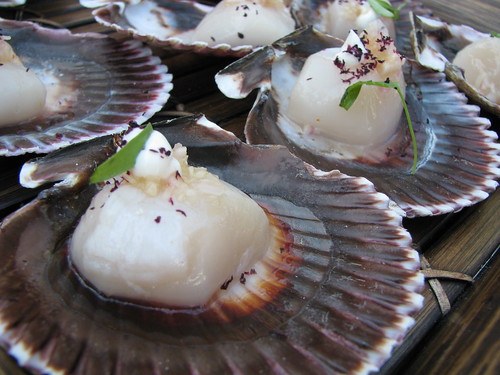 [/caption] We call this, “November in Southern California.” Sunny and mid-seventies. Of all four, enabling seasons in SoCal - I would pick Fall to have the most misses. Tree leaves wilt to brown with no color in between and … well, who am I kidding? I really don’t think any of that is a big deal - let’s be honest. The weather here is mild in the Fall and we love it. We can be outside and sweating our makeup and deodorant off as the walls of our cavity cave with the weight of braised meats and three-cheese recipes, with a side of yams, beets and potatoes in four different forms (at least when they first went into your mouth). You’re also still going to see that girl walking around wearing a shag fur vest and 5-inch platform suede boots, seasons be damned. So - barring gargantuan intake - it’s easy to see why the stand singularly serving as the raw oyster bar in the whole of the event won out. Named simply East, the seafood spot is glamorously outposted on that stretch of Hollywood Blvd. - their scene decidedly more Hollywood than seasonal. This actually paid off for them at Great Chefs of LA in terms of standing out on that hot November Sunday. Of course, those of us with internal clocks triggered by daytime temps “dropping” to the 60s are used to this. We eat the slow-cooked meats and we enjoy it. And the paninis…and the polentas…ahhh, caprese with burrata…relief. California. Bring it on. We can hang. We hung around Bottega Louie. And we hung around Dakota, Akasha and Saddle Peak Lodge. And there was Bazaar with caipirinhas made with liquid nitrogen, folks - forever reminding us that if it’s theirs then it is trÃ¨s chic. The truck of the moment was Border Grill’s. The libation? Champagne - lest anyone forget the real battle of the day was not to race from outpost to outpost but to prevent passing out. Nothing like cold, refreshing bubbly to the rescue!

It was a collaborative showing of some of the best things happening in the L.A. culinary scene right now. One thing’s for sure - I sure wish I were the best friend of the winner of the Neal Fraser-cooked (BLD, Grace) dinner for 10. As much as $10,000 was raised for the Kidney Foundation with George Lopez and Candice Kumai hosting - and Jennie Garth and Chef Marcel Vigneron making their appearances for a delicious cause.

It’s a good food event to look forward to next year - weather be damned!

So Much Food Under the Sun - ShopEatSleep