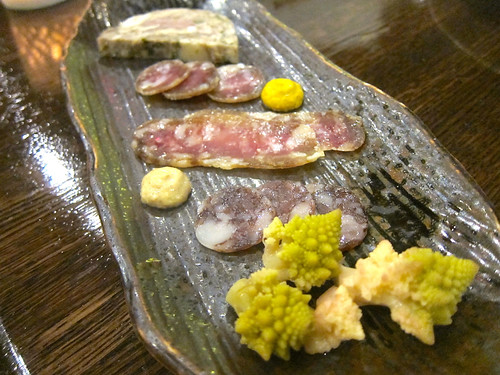 Charcuterie Board[/caption] There was a post I did awhile ago on “Bars That Don’t Belong,” and the essence of that article was that the particular bars listed weren’t categorically all good or all bad - just that their ambiance and drink were divergent from those of the surrounding establishments. What that entails is a problem with the diffusion of foot traffic from nearby establishments. [caption id=“” align=“alignright” width=“240”] 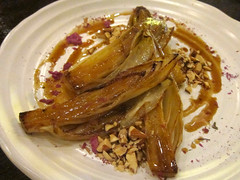 Belgian endives poached in aromatic broth, vanilla bean sauce, toasted almonds[/caption] Located on Sunset Boulevard, Gorge is just a few doors down from The Whiskey. It goes without saying that The Sunset Strip is not a place you’d expect to find a French wine bar, much less one that makes all their sausages, terrine and pâtés in-house, as a proper French wine bar would. So I was surprised as anyone that at Gorge, not only is the food delicious, but the food-wine pairings are exceptional thanks to Master Sommelier Darius Allyn, who just so happens to also be the husband of head chef Elia Aboumrad. It’s quite a departure from where he came - that is, the Montage Beverly Hills - but the results of their efforts have captured all my admiration for doing so. While the food and atmosphere is comfortably no frills, it probably leans towards exotic in the perspective of your typical Sunset Boulevard patron. The same of which could be said of Night + Market, not too far west of Gorge. And so the culinarily adventurous restaurants along The Sunset Strip continues. Thank goodness both examples are on the mark in their respective disciplines. [caption id=“” align=“alignleft” width=“240”] 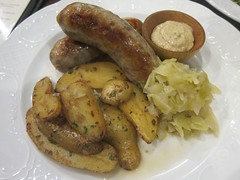 Beer Sausage, sauteed fingerling potatoes, Choucroute, German mustard[/caption] The Belgian Endives came poached in a delicious vanilla bean sauce and dressed with flower petals and toasted almonds - a pleasantly aromatic start and paired perfectly with a 2007 Becky Wasserman Chardonnay from Burgundy. But the Chicken Liver Parfait was literally some of the best I’ve had. It comes with a layer of clarified butter and paprika on top, which was a nice touch. I enjoyed the consistency and fully developed flavor - this is one of those must-order starters, or you didn’t really visit Gorge. Though the same, I guess, could be said about their Charcuterie Board - the cuts of which, like everything else, are made in-house. There was good variety but each cut was seasoned and cured just perfectly. Both the parfait and charcuterie were paired with 2010 Domaine Roland Schmitt Pinot Gris from the Alsace region of France - a dry white with a good amount of acidity and perfect for holding up to the flavors of the meat. [caption id=“” align=“alignright” width=“240”] 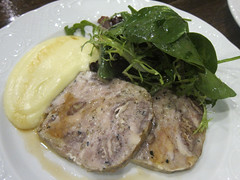 Pheasant Terrine - Wild pheasant, Black truffles, Pecans, Potato puree[/caption] The Beer Sausage was also exceptional - juicy, tender and delicious - and paired so well with 3 Monts, a spicy if even fruity golden ale that really brought out the flavors of the sausage. And what an extra special treat the Pheasant Pâté was. Made with wild pheasant, black truffles and pecans, the two slices of pheasant pie were the most texturally interesting of the bunch. There were just a few black truffles, understandably, sprinkled throughout but it gave just the right amount of weight to the pâté. The pecans added a tiny crunch. So delicious, but like most items on the menu, will fill you up fast with their rich flavor. Gorge, in my mind, is one of those rarities. The food and drink are top-notch, so much so that there’s nothing preventing it from becoming a destination. When you have Joël Robuchon, Guy Savoy and The Montage in the collective resume, these account for all the bragging rights experience a new restaurant needs. The best part of it, though, is that all this comes without the pretension, including an affordable price range on top of the great attitude by all partners involved. [caption id=“” align=“alignleft” width=“240”] 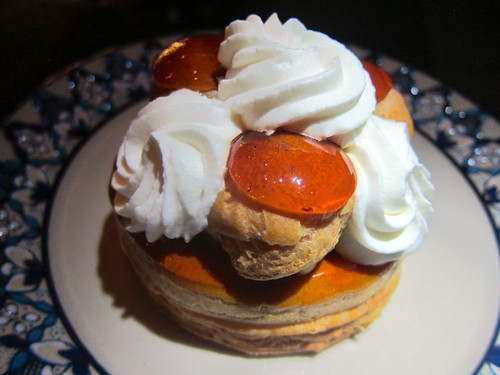 Pumpkin St. Honoré - Pumpkin custard, Vanilla choux, Vanilla chantilly[/caption] Just take a look at Uyen Nguyen’s fantastic St. Honoré cakes, originally named for the French patron saint of bakers and pastry chefs. They’re not only delicious, with just the right amount of cream and sugar, but texturally complex, chock full of flavor (5 in all) and really, a pastry lover’s dream. Don’t skip over it. You’ll probably eat the macaron mounted on the cake first, for effect. (I’ve also a couple more missions to complete at Gorge: The cheese selection and brunch. Report back if you’ve tried.) While enjoying our dinner, two rockers walked in to look at the menu, each step punctuated by the jangling of chains on their motorcycle boots and leather jackets, only to leave after a courteous “Thanks, man.” I so want Gorge to thrive, but in order to do so, it must attract patrons from off The Strip. But on the other hand, if more headbangers get into head cheese, the more power to them. It’s an ambitious task to bring these palates together, and we’ll see if Los Angeles - or more specifically, West Hollywood - is ready for it. So long as Gorge remains in business, I’m all horns up. All food and drink were hosted.