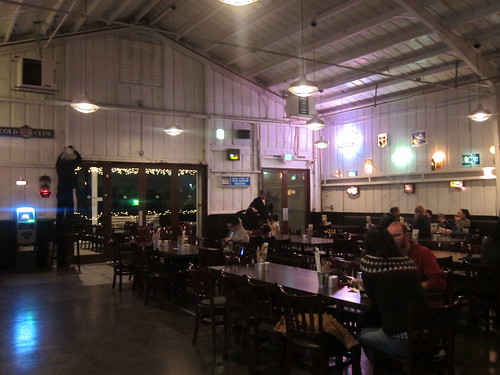 [/caption] This few months-old gem in Atwater Village not only signifies the continued evolution and uprising of the Los Angeles brewing scene, it’s a move towards the eco-friendly, gentrification of the beer can. Costing less energy and space than glass bottles in production and recycling as well as affording more protection from the elements for its beers, cans aren’t just used for casing PBR, anymore. Golden Road is out to educate LA beer geeks and dabblers, alike. [caption id=“” align=“alignright” width=“240” caption=“Twice-baked Potato at Golden Road Pub”] 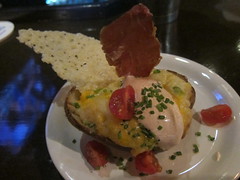 [/caption] The age of Golden Road Brewery also re-introduces sessionable beers to a scene that may have been bent on, or even obsessed with, high ABV beers just a few years back. They are also taking on IPAs by making them a custom by incorporating seasonal ingredients and making each brew truly local. Two go-to’s on those fronts: Their Golden Road Hefeweizen and Point The Way IPA. Luckily, it’s not just a lone brewery Golden Road, helmed by Tony Yanow and Meg Gill, has up in Atwater Village, but a very cool pub offering each of their beers, 15 guest taps and a very chill, neighborhoody scene where, if you visited often enough, people will know your name. The food menu also has plenty of options for omnivores and vegans alike, so there’s something for everyone in your party. [caption id=“” align=“alignleft” width=“240” caption=“By the taps…”] 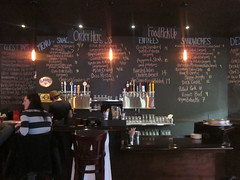 [/caption] And what better way to introduce your taste buds to Golden Road by dropping in on their collaborative Hangar 24 dinner? Their good friends from Redlands brought in 70 pounds of blood oranges from Hangar 24’s neighboring orchards thanks to their brewer Kevin Wright. Golden Road’s brewmaster, Jon Carpenter, spent the previous weeks developing a custom yeast for this very special brew, to create the end result: Valentin, a 6.5% ABV French Saison. This one-of-a-kind beer dinner features dishes created by Golden Road’s Chef Adam Levoe, who worked closely with Jon and Kevin to craft each pairing. The five-course dinner will feature two beers from Hangar 24, two beers from Golden Road Brewing and our collaboration beer, Valentin. Jonesin’ to see the whole menu? Look no further:

House made truffles and berries

This is one beer dinner not to miss out on! Viva Los Angeles beer!