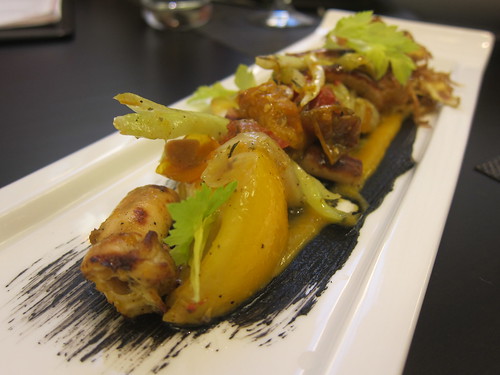 Wood Grilled Octopus, Tomato Puree, Artichokes, Squid Ink[/caption] When it comes to the new food and beverage choices that accompany the gentrification of Downtown Los Angeles, there’s a constant balancing act that goes on between lunch-friendly business spots and places with offerings hip enough to entertain night life. (What kind of nightlife? A whole other question.) But the 3-weeks-old Towne might just be the spot to fulfill both those needs, thanks to their manageable menu and stellar food by chefs Eric Hara & Ryan Morrison as well as outstanding cocktail menu by Jason Bran. [caption id=“” align=“alignright” width=“240”] 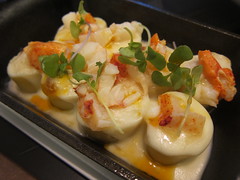 Lobster “Mac” ‘n Cheese[/caption] Located in South Park’s upscale Watermarke Tower (you’ll be dining beneath a many Dodgers’ quarters, to be sure), Towne offers an enticing menu with something for everyone. Looking for original yet un-fussy bites? A delicious Clover Club? Or maybe just the $18 per person pork shank that is braised for 10 hours before being deep fried, enabling a super tasty, tender-yet-crispy feast of texturized, steaming and rich meat. Towne is just the place to wean Los Angeles off its addiction to run-of-the-mill gastropubs - and with it being this early in the game, it seems they’re doing it with plenty of ease. Favorites included their unique rendition of Lobster “Mac” ‘n Cheese, with house-made pasta casings filled with mushrooms and Fontina cheese and whole chunks of lobster topping the array. Other favorites utilize their wood burning oven, which give much of Towne’s dishes a distinctive flavor - such as the delicious Grilled Octopus with tomato puree and apricots but also artichokes and squid ink to match its savory profile. The Lobster Smokey “Pig” in a Blanket also benefits, and the result is an anything-in-a-blanket you’ve never had before. [caption id=“” align=“alignleft” width=“240”] 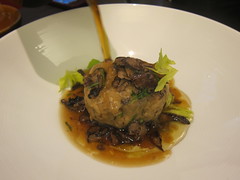 Beef Marrow Matzoh Ball Soup[/caption] And while many might consider kale salad old and overdone, Towne’s rendition is a refreshingly unique take. The Tuscan Kale Chop Salad is a visual treat as well, with enoki mushrooms, white beans, cabbage and breaths of shaved Monterey Jack all so finely sliced and tossed together so beautifully. The touch of chili & garlic vinaigrette is just enough to enhance this delicious mosaic of vegetables and protein. The Bone Marrow Matzoh Ball Soup is such a savory treat it may have you re-thinking the chicken stock the original usually comes prepared with. With shiitakes and beef marrow consommé, this bowl of deep colored soup is full of flavor. White beans jump kale and reappear in the ravioli, but not without wood-smoked ham hock broth and swiss chard. The ham was the delight, here, and recollecting it now reminds me of the day-after text exchange with Maya: “Hey, do your clothes smell like wood smoke?” They didn’t, but I guess hers - plus her hair - all did. This “issue” had only thus far been discussed in the context of Korean BBQ! I call it: Scent of Woodfire. And the cocktails!! I’m not sure when there was ever a shortage of great cocktails in the area before 5 years ago, but with Jason Bran now on this side of town (while he also heads up Roger Room on La Cienega) it looks like there are plenty more to go around - and who’s here to argue? [caption id=“” align=“alignright” width=“240”] 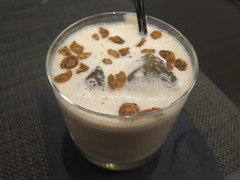 CoCo Punch[/caption] Running off Towne’s “New American” vibe, Jason gets ever creative with more than a handful of newly-created, original drinks - accompanied by some well executed, if tweaked, classics like a Clover Club with Plymouth, lemon and egg white but also clove and house-made grenadine (vanilla, hibiscus, pomegranate), as well as a Spiced Apple Julep with Maker’s, apple and cinnamon. Jason ups the fun factor with a couple of his creations, such as the official “Towne Kool-Aid,” a vodka limeade of sorts which comes complete with a stash of red Towne Kool-Aid powder for each guest to add and stir into his or her cup. [caption id=“” align=“alignleft” width=“240”] 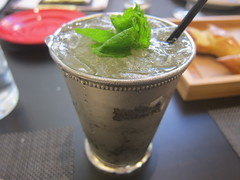 Spiced Apple Julep[/caption] The playful CoCo Punch is one of those cocktails that are beyond elementary, because when it hits your lips, you’re surprised by how good it is. Jim Beam, Cocoa Pebbles cereal milk and nutmeg with actual cocoa pebbles takes David Chang’s cereal milk concept (you may be most familiar with the Momofuku soft serve), turns it on its head and makes it into a delicious cocktail. Looking for a refreshing cocktail? Order the Genesis Collins with Beefeater 24, grapefruit, honey & soda or the Eastern Mule, made with Russian Standard Vodka, lime and house 5-spice ginger beer. If you’re into vodka martinis, go with the “Clean” vodka martini, made with Chopin and blanc vermouth and garnished with cucumber, carrot and dill. But if you’re not messing around and desire a serious drink, go straight for the South Park (DTLA), made with Zaya Rum, Punt e Mes, Vermouth and Chuncho Bitters. This strong cocktail has all sorts of destiny on it, with Towne’s resident, burgeoning neighborhood being its namesake. So go ahead and head to Towne, to go to town. There really is something for everyone whose mission is to taste and drink beautiful, delicious things. All food and cocktails were hosted.