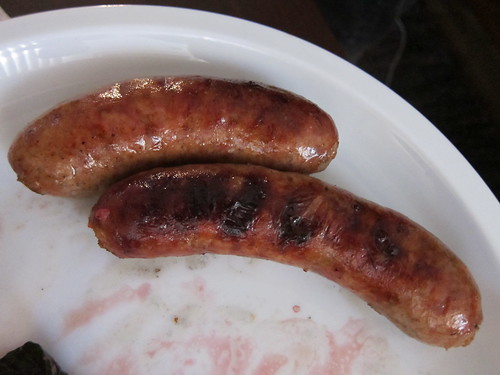 [/caption] Hollywood is a long way from Green Bay. And when beating the cross-stateline rivals, Chicago Bears, was essential to, first, making it into the 2010-2011 playoffs and, second, making it to Super Bowl XLV, I knew I needed a good luck ritual to help my team win the NFC Championships last week. I needed a good luck food. My lack of planning meant that I forgot to mail-order the Sheboygan brats ahead of time. Instead of going to the supermarket for Johnsonville, I decided to channel my fandom through locally-made sausages, instead. I figured my Wisconsin meat-packing counterparts would understand, since I’d be saving shipping fuel and time. After all, freshness is key, and always has been the priority - even as a matter of spoilage thanks to high fat content in bratwurst, with the earliest recipes dating back to the 1400s. [caption id=“” align=“alignright” width=“240” caption=“Marinating Bratwursts”] 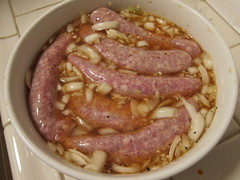 [/caption] I stopped in the brand new, brick and mortar sausage shop known asÂ Grindhaus on Hollywood Blvd. to see what was ready in their case. Italian sausage, bockwurst, pickled vegetables were all available, but of course, the bratwurst were sold out. I was lucky in that they were working on another batch. When I asked about their sauerkraut, they were also working on it then - but said it’d be ready and done fermenting in 8 days. I returned 2.5 hours later to get the first of the new batch of brats. They cost a reasonable $6/lb, which yielded 6 sausages for about $10.50. If my experience taught a lesson, phone in if you have specific tastes to see what they have in stock. They are allegedly rolling out their food truck very soon and will be roaming the eastside, so I can’t wait to tasteÂ their prepared food on-the-go. Since my bratsÂ were completed literally a few minutes beforehand, one of the three friendly Grindhaus guys present advised to leave them in my fridge, uncovered, for a few hours so that the meat would settle and harden a bit inside the fresh casing. Done. And then it was time to start the ritual of marinating them overnight. Below is the marinade recipe I used, which I’m in no way touting as the best out there, nor is the method I used. I have a lot more experimentation to do before I cross that bridge. But these fresh brats from Grindhaus turned out so tasty, I was extremely proud of my somewhat haphazard method. Maybe this method will work for you, too. (Recipe after the jump.) Beer Brat Marinade 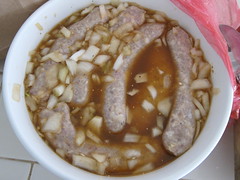 [/caption] Marinade in the refrigerator overnight (I covered the picturedÂ dish with plastic and flipped them once in awhile). Before grilling, put entire contents in a pot and gradually heat while stirring gently, being careful not to puncture any casings or heat too fast so that the brat contents burst. After 20 minutes, grill over charcoal until brown and firm. If you’re not serving them right away, keep the marinade mixtureÂ simmering so that you can store the brats there until they’re ready to serve. Don’t skimp on the bread. French rolls, ciabatta, brat rolls will do (please don’t use hot dog buns). Dress in whole grain mustard. Enjoy with your favorite craft beer. Have sides of sauerkraut or your favorite pickled veggies. Es war kÃ¶stlich. It was such a big difference having fresh-made sausages, with the flavor being extra robust. The texture was unlike frozen sausages in that they didn’t cut cleanly because the meat had literally just been packed into the casing.Â And like any die-hard fan would believe,Â my ritual of preparing and cooking themÂ was just the piece of the puzzle needed to help them beat Da Bears. I’m not exactly sure what I’ll be doing for The Super Bowl, what with parties going on around town, but one thing’s for sure. Grindhaus is a great source of freshly made sausages, no matter the occasion (OK fine - and no matter what the fanbase). And another thing: Go Pack Go!! Beat the Steelers!!