Go Forth and Board

Burton, to me, has always been the over-hyped, over-priced stalemate of snowboarding. As the leading commercial brand of an anti-establishment culture, they inadvertently lumped themselves with the ‘stablishment. They get away with overpricing their boards on the MSRP because people new to the sport don’t know anything else except Burton and those who don’t know anything better (new or old) buy in to the fact that they’re the best. Oh right, and then there’s Shaun White–the most well-known snowboarder in the world and he rides for them. ;)

I’m not saying they’re the worst, but they are certainly not the best value. On top of that, even their tech isn’t really breakthrough, anymore … arguably with the exception of the space-materials, $1000 Vapor. Lib Tech’s got Magna Tractionâ„¢ (beveled edges) and Bananaâ„¢ tech (concave board shape) now and I hear it’s the hottest thing for holding an edge and buttering, respectively. Luckily I’ll be able to test Magna Tractionâ„¢ out myself–but not before more snow actually descends on Mammoth–on my new Roxy Ally MTX. (A Roxy board, you ask? Yeah, eat your heart out! They’ve got Mervin Manufacturing behind them now. ;) ) But enough with the “Down With Burton” talk, because I’m about to reveal the coolest thing I’ve seen them do since single-handedly legitimizing the sport. There are 4 Ski-only resorts left in North America and they are putting up $5,000 each resort to the best documentaries showcasing snowboarding on said prohibited grounds:

They call it poaching and–even if I could pony up some transportation and lift ticket funds–hell if I can figure out how I’d smuggle boards up a lift like they show in their demo videos. Major props to the kids who have the balls and videography skills to do so. Which raises the question: What’s the point? The intro describes such ski-only resorts as fascist and elitist–and I have to say I agree. It’s like being proud of having one of the last four “whites only” drinking fountains at your city hall. Loving to allow your customers to revel in their hate and ignorance, much? I can remember the smug comments skiiers made about “you snowboarders” once upon a time–as if they still had a ski to stand on and snowboarding was just a fad. And as if skiiers’ money is better than snowboarders’ money. “I hate it when you snowboarders ride your back edge all the way down the hill.”

As if their “plowing” made any better patterns in the snow.

“You snowboarders need to learn to get control.”

So all skiiers have control all the time? If I’m mistaken, riding the back edge in snowboarding affords way more control than plowing does in skiing.

I especially love the “we were here first” mentality, or in snowsports it’s the “my two sticks came before your one” mentality. It’s a classic mindset that also smacks of fascism. This is America, folks. Tell me now, according to you–which generation is it exactly that’s allowed to immigrate into this country and therefore has more reason to live than the one after it? The rest of us will just high tail it back to “where we came from.” The way you derive pleasure out of your dual-sticks in snowsporting is more equal than that I derive out of my singular … stick. I’ll learn how to skate on two of them because you said so. Oh, and thank you for the usage of your snow.

And while we’re on the topic of Burton, what’s “brand hype” if you don’t have a flagship store on Melrose Avenue? 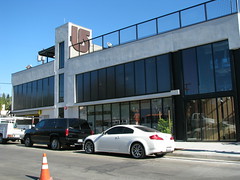 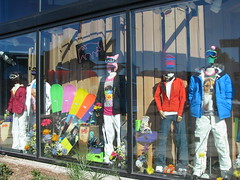 The Burton-Channel Islands Flagship had their official store opening in the middle of last week–for which I heard they made fake snow. Ãœber cool. Unfortunately, they were under construction during the daytime when I couldn’t wait any longer and hopped on over during a lunch break. Apparently they are open in the evenings, though (as evidenced from the Improv Saturday night during my company’s holiday party). Eventually, I will be able to take more pics that do the shop justice, which I hear is huge and has a couple skate half-pipes. Hopefully it’ll be able to hold my boarding fix until the snow actually falls. Pray for rain, everyone!! And be sure to send me a copy of your ski-only resort poaching vids. ;)