Get Your "Lardon" With the Bacon Food Truck 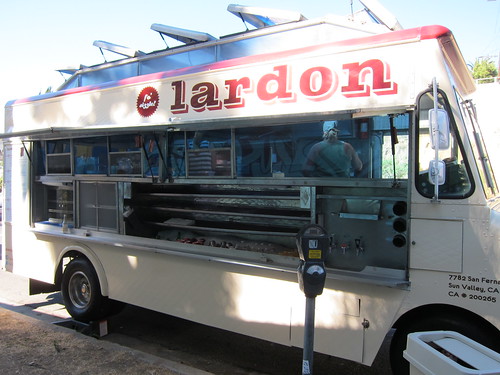 [/caption] Food trucks come and go. I mean, literally. Everyday, they do this. But now we can add to the fleet a truck that is inspired primarily by bacon. Because we all have that vegetarian friend whose sole weakness is strips of pork - so you know that centering a truck around one ingredient is, well, putting all your pigs in a very big, fail-safe basket. Yesterday afternoon, I caught their soft launch in Silver Lake. Heather and Jeremiah Crowley, the masterminds themselves who discovered the magic of bacon at home with their kids, were on board and super excited to be putting their home-cooked recipes out on the road.Â  Heather says, â€œThereâ€™s nothing like the scent and sizzle of bacon in the early morning, but we felt it could and SHOULD be eaten anytime, anywhere!â€ TouchÃ©. “Fo sizzle.” Check below for some mouth-watering bacon applications: Breakfast [caption id=“” align=“alignright” width=“240” caption=“Frisee au Lardon Sandwich ($6) | With fried egg, vinaigrette on toasted brioche”] 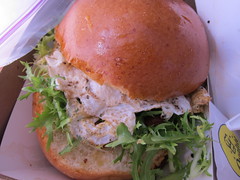 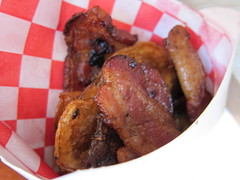 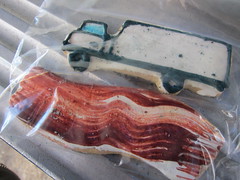 Desserts come from the popular Silver Lake bakery, Lark.Â As for refreshments, theÂ truck serves canned soda, water and even fresh-squeezed OJ if you’d like Vitamin C with your bacon breakfast. I very much enjoyed my Frisee sandwich as well as The Baco. And I can’t wait to try other things on their menu. So whether you catch a soft launch (soft stop?) of theirs while they iron out theÂ menu and operating kinks the rest of this weekÂ - or wait til their hard launch on Monday -Â be on the look-out for the Lardon truck via their Twitter account (@getyourlardon) and Facebook page. Your bacon cravings demand it!

Get Your Lard On Site