Garden-To-Table Dinner at Ray's a Delight at LACMA 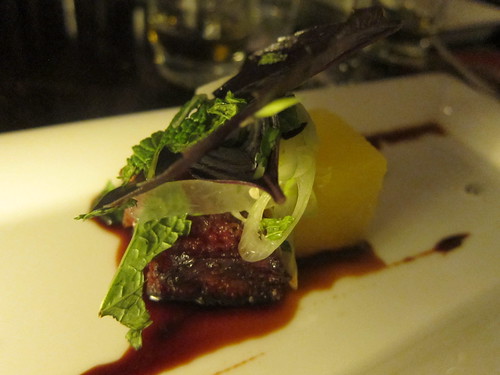 [/caption] I’ve always been a fan of Stark Bar. What’s not to love? Great cocktails made with fresh ingredients and spectacular, savory bar bites are yours to enjoy within one of the most cosmopolitan confines in Los Angeles. Ray’s and Stark Bar bring purpose and focus to LACMA’s outdoor scene. It’s the stalwart at the center of a free-flowing patio in which the art is in the food and cocktails - a scene I’m readily available to insert myself into as I’m a new LACMA member! [caption id=“” align=“alignright” width=“240” caption=“Granola | Savory, Candy Stripe figs, pears, baby greens, sweet goat cheese”] 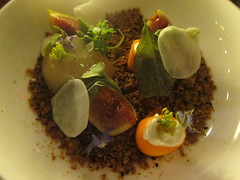 [/caption] But I wasn’t completely sure how much of my favor for Stark Bar would translate to the dining room at Ray’s (or if any of it would). Well into the second course of our media dinner party, it became clear that all those Stark Bar’s bar bites I’ve become familiar with really are a mere introduction to the depth of Kris Morningstar’s cooking. There were some amazing flavors to be had from one course to the next. It’s easy to see why Ray’s and Stark Bar are one of the representative Best New Restaurants in Esquire Magazine’s recently published 2012 list. It’s no detail that the cocktails, by Michel Dozois, were a delight. The ones served (the names of which I irresponsibly didn’t record) were refreshing and particularly complementary to the dinner. As was a theme during the meal, Kris masterfully integrated hisÂ garden ingredients into the original design of his dishes. We have all had an heirloom tomato salad, but I was floored by his version, which came topped with charred local squid, shiso and Bottarga vinaigrette.Â The Granola, aÂ wholly imaginative dish in itself (who serves granola for dinner?), had such complexities that each bite made for an evolutionary taleÂ til the very last spoonful. It was refreshing, yet savory, yet sweet and herbal…you will just have to try it before the end of the season, yourself. [caption id=“” align=“alignleft” width=“240” caption=“Peach | Roasted peaches, almond financier, Lady Plymouth geranium ice cream”] 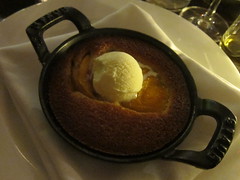 [/caption] TheÂ Pork Belly was a crispy, deliciousÂ slice, as coupled with a sweet cube of golden watermelon. The black vinegar and basil brought everything together while delicatelyÂ balancing out the sweetness of the other two. The Sonoma Lamb was a savory masterpieceÂ and tender asÂ as can beÂ with Butter beans, corno di toro peppers, baby artichokes, oregano and rouille - more evocative of the bar menu I’ve become accustomed with. The dessert, which was a sweet and savory delight cooked and packaged in an iron skillet, was such a nice nightcap. It wasÂ the perfect amount of sweet with just enough savory breading, and I devoured every inch. With Ray’s, it’s apparent thatÂ museum restaurants in Los Angeles have finallyÂ moved beyond the obligatory watering hole and feeding quartersÂ for art patrons. Instead, the space has itselfÂ become a viable destination for those looking for solid cocktails and bar bites or, what’s more, an inspirational meal.Â Since thisÂ makes for an overallÂ exciting time to be at LA’s representative art institution, it really is something all Angelenos can be proud of. All food, wine and cocktails were hosted.