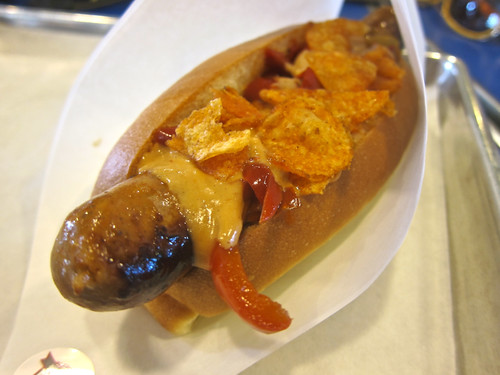 Memphis BBQ Dog - Porker Dog, grilled peppers, crushed paprika chips[/caption] What happens when you take an iconic, American food known for consisting of meat trimmings, fat and preservatives and reinvent it utilizing top notch ingredients and dress them up with imaginative combinations - before framing it all in a delicious bun? You get Fritzi Dog, now at its first outpost in The Original Farmer’s Market at 3rd and Fairfax, serving up awesome dogs and sausages made with prime cuts sourced from veggie-fed, humanely treated animals. What you won’t find are snouts, tails, antibiotics, added nitrates nor mechanically separated meat. ”You’ll find the same quality of ingredients [at Fritzi Dog] as you’ve found at [my other restaurants] Grace or BLD,” Neal states. [caption id=“” align=“alignright” width=“240”] 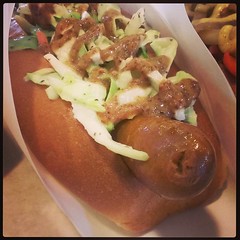 Slaw Dog - Deli Dog, creamy coleslaw, brown mustard[/caption] But what I’m a huge fan of are the expert combinations thought up by Neal Fraser, of which there are plenty to go around, so you’re bound to find one or five that strikes your fancy. Though there’s an option to build your own dog (5 dogs in all) with the same awesome ingredients and toppings to choose at your own whim, I’d actually recommend one of the many specialty dogs Neal built and tested himself - such as the Garlic Dog, a Cali Dog (beef and pork merguez) in a pretzel bun (!), topped with garlic aioli and fried onions. At a recent media tasting, Neal revealed that he isn’t a fan of fake meats, and so he came up with a pretty ingenious vegetarian option that is tasty yet not trying to be something it really isn’t. In fact, I was a big fan of Fritzi’s Carrot Dog, which is essentially a carrot _sous-vide_ in spices before being grilled for good flavor. The dogs aren’t the only thing to be desired as the other items are also solid in their own right, with Tots to die for (the Buffalo Tots come with a couple deadly aiolis) and a hopelessly fluffy, tasty batter to encase each hand-dipped Corn Dog. Also try the Bacon Pups, which are also sous-vide bacon ends dipped in the same, delicious Corn Dog batter that come with a Thai chili sauce. While perhaps you’ve run out of reasons to visit (other than, say, Short Order and Loteria Grill), Fritzi Dog is a great, casual reason to visit The Original Farmer’s Market at 3rd and Fairfax with plenty of delicious dogs to try every time you come back. All food was hosted.