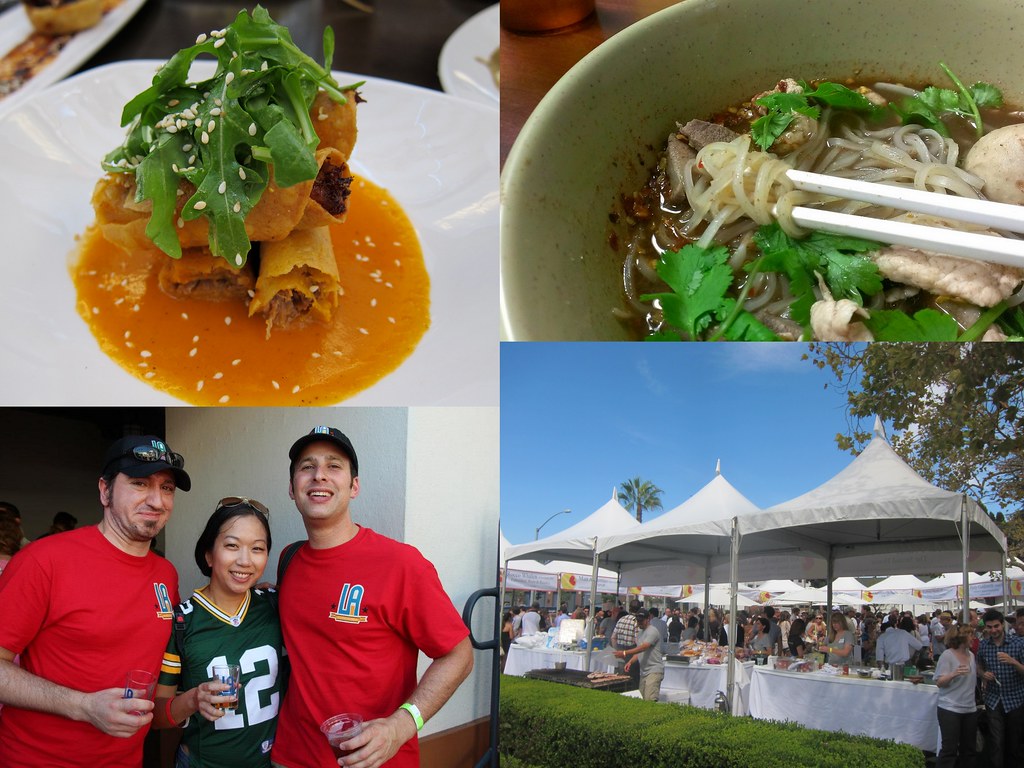 Duck Taquitos (Red O), Boat Noodles (Pa Ord), L.A. Loves Alex’s Lemonade, LA Beer Week 2012 - thanks to Caroline on Crack (Clockwise L-R)[/caption] It’s that time, again, to present the essential food events going on the next few weeks around the city. It’s a wonder that I don’t do these more often, because I often want to highlight events that I don’t have time to write about before and after they occur. So here’s a reminder, then, to check back on the blog whenever you can (on a full size browser, not mobile) for my Google Calendar-ready events list I’ve been maintaining in the right-hand column, underneath my avatar –>. Without further ado… L.A. Beer Week Opening Gala at Union Station - Sunday, September 22, 2013. 11 AM - 3 PM. $70pp.

This typically epic beer festival has been shrunk down to size to accommodate more manageability, interaction and awesomeness. Which means you should buy your ticket ASAP because even so, they’ve always sold out (plus, no sales will be done at the door). Unlimited 4 oz. pours of some of the best beers around is really all you need to know. You’ll also have access to bites so you don’t get too toasted, but my advice is to come already having eaten lunch so you have your base down, pat. While you’re at it, definitely check out Randy Clemens’ post over at Los Angeles Magazine where he outlines the 10 (or 9 other) L.A. Beer Week Events You Can’t Miss - because although they call it a “week,” you know there’s always good reason to drink beer every day for 10 days (Sept 19 - 29).

This always-stellar event hosted by Chef Suzanne Goin, Caroline Styne (Lucques, AOC, Tavern) and Chef David Lentz (The Hungry Cat) has, over the years, always been one of my favorites. You can look forward to not only bites from some of L.A.’s most acclaimed chefs, but stellar chefs visiting from elsewhere (April Bloomfield, Adam Perry Lang, Chris Bianco, Donald Link, Naomi Pomeroy, Jonathan Waxman). Over the years, they’ve raised more than $1 million to fund childhood cancer research. Word has it that there’s less than 100 tickets left for next week’s event, so don’t delay on securing yours. No tickets will be available at the door.

Thai culinary ambassador (you may have seen him host Thai Town Melting Pot Tours) Jet Tila hosts this special afternoon on the Paramount Lot featuring cooking from our very own Thai Town…and more. Demos and discussions will be held with Jet, Evan Kleiman (KCRW’s “Good Food”), Andy Ricker (Portland’s Pok Pok), Susan Feniger (Street), Sang Yang (Lukshon), David LeFevre (MB Post, Fishing with Dynamite) and Kris Yenbamroong (Night + Market). Just think - Pok Pok wings potentially to be had in Hollywood? Could it be? And oh, all the wonderful flavors that will be savored!! Other restaurants of note include Pa Ord, Ruen Pair and Sapp Coffee Shop. Finish it off with some Muay Thai demos and cultural dances for an afternoon full of Thai immersion.

Welcome the New York-based James Beard Foundation to its first event in Los Angeles in over six years as they lead off the night with a reception featuring a few food trucks (The Grilled Cheese Truck, Komodo, Mariscos Jalisco and more), beer by The Bruery and tunes by Black Crystal Wolf Kids. After the reception, guests will enjoy a five-course dinner in Union Station’s original, 1939 Grand Concourse by Taste America® “All-Star” Rick Bayless, Nobu Matsuhisa, Michael Cimarusti, Jeremy Fox, and Karen Hatfield. Each course will be paired with wines from Kunin, La Fenêtre, and Champagne Nicolas Feuillatte and you’ll get the opportunity to bid in silent auction on some choice, luxury items.

See you all sometime this month. Remember to train it - especially if you’ll be at the L.A. Beer Week Opening Gala! It’s #CarFreeLA Day! You can also check for car-free guides on the Discover LA website.