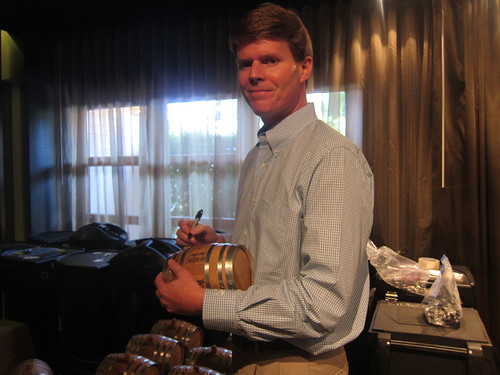 Rob Samuels, COO of Maker’s Mark[/caption] We all know Maker’s Mark. So when I had a chance recently to catch up with Rob Samuels, I jumped at the chance. He’s the 8th generation bourbon maker of the Maker’s Mark family, and just succeeded his father last year in the position. Theirs is the only bourbon distillery designated as a National Historic Landmark. With the amount of history behind the company, there were a few things I had to know… What’s your favorite cocktail to drink with Maker’s in it? And how do you feel about how Maker’s fits in with the ongoing cocktail scene?

I was just at a nice event at Morton’s, where the bartender made a great Manhattan - [a cocktail] which I really enjoy. More than anything that’s what I love. With the growth of premium spirits, handmade spirits, and that’s the history of my grandparent’s legacy, when they started in 1952. That was the beginning of the modern era of bourbon. To incorporate their craft, what they created with the handmade craft of a unique cocktail is really nice. I love just working with bartenders.

What’s the story on your family as they made their move to America?

We made whisky in Scotland as far back as the early 1500s. We lived in Pennsylvania for 100 years with farmers, headed and operated a still, moved south and settled in Bourbon County, Virginia before Kentucky even existed. We had a distillery called TW Samuels for 100 years. That is the distillery. They sold that TW Samuels distillery and decided to make a handmade refined smooth bourbon.

Obviously, it seems as though everybody knows about Maker’s Mark now. What was the path to notoriety for your brand?

We had essentially no growth of the first 25 years through the late 50s, 60s & 70s. Maker’s was kind of a cult brand only loved by Kentuckians. Starting in the 1980s, Maker’s began to grow. We’ve always had more demand than supply since that point.

How has that increased demand affected your product and your volume?

There’s big time opportunity in Europe and different parts of Asia. We delayed that opportunity. We could flip a switch and probably sell 30% more tomorrow. But we’re a single source of supply. All the Maker’s Mark is produced by us, and we don’t sell or buy from anybody. Wineries do that. A lot of brewers do that. So you have to decide not take shortcuts; you have to make tough choices.

Luckily, we’re not in Europe or Asia and not in shortage of Maker’s. There are quite a few cocktails made with Maker’s around town - signature or not, but one of the most popular ones is at The Roger Room on La Cienega. The Thug by Damian Windsor is made with Maker’s Mark Bourbon, Bärenjäger Honey Liqueur, lemon juice and spicy habanero bitters, and it’s one that will, if you’re not careful, be sure to knock you off your feet. Spicy and smoky all at once, it’s a stiff one but has been one of my favorites around town for a few years now. [caption id=“” align=“alignright” width=“240”] 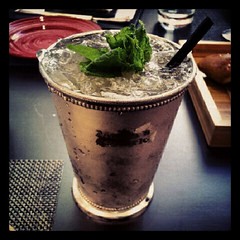 Spiced Apple Julep at Towne[/caption] Jason Bran has made a Spiced Apple Julep especially for Towne Food & Drink in the Watermarke Building in Downtown L.A. It’s a variation that’s actually perfect for fall. Below is the recipe should you feel like making one at home:

Handful of mint 1 oz apple syrup* 2 oz Makers Mark Slap! and place a handful of mint leaves into julep cup, fill with crushed ice. Build apple syrup and Bourbon in a pint glass, ice, shake** and strain Julep cup (or bucket glass), top with mint sprigs and micro-planed cinnamon. *Apple syrup is 2 parts green apple puree to 1 part simple syrup. **Yes, Jason knows you don’t shake a julep, but this one is so that the puree doesn’t sit at the bottom.

After these past few horrid heat waves, hopefully fall is finally here. And whether I intend on it or not, I’ll be sipping some Maker’s, one way or another.