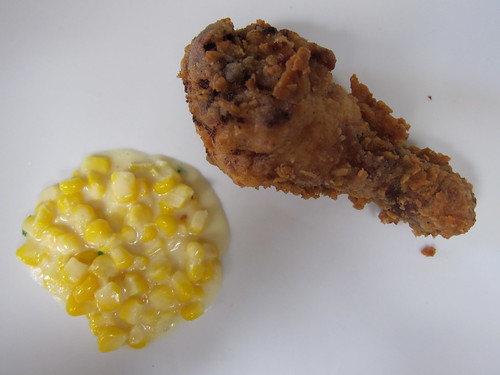 [/caption] On Sunday, I joined Josh Lurie of Food GPS and a good showing of food bloggers, writers and fans for a Beverly Blvd walking tour. It was really nice to get a flagship bite from each of four stops as well as glean some history from a couple landmarks on the way, such as CBS Studios and Pan Pacific Park. [caption id=“” align=“alignleft” width=“240” caption=“Mark Gold”] 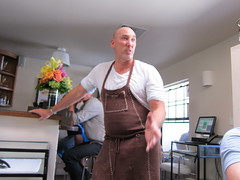 [/caption] We started off at Eva where Mark Gold was reminiscent of his posh tenure with Patina and his subsequent move to his own venture, occupying the old Hatfield’s space. Left to his own devices, he is free to thrive, free to fail - but free, nonetheless - and it certainly looks like it’s the former case for him a mere 10 months later. Tuesday night is a popular night at Eva, when guests can enjoy his famous buttermilk, duck fatÂ and tabasco battered fried chicken and beer to their heart’s content for just $25. The restaurant as a whole - for lunch or dinner - is a place you can rely on for good bang for the buck, as there are consistently solid dishesÂ that emerge from Gold’s kitchen at reasonable prices. I could eat Eva’s creamed corn - infused with bay leaf and bechamel - and fried chicken for days. [caption id=“” align=“alignright” width=“240” caption=“Steamed Mussels in Tomato, White Wine & Chili Broth”] 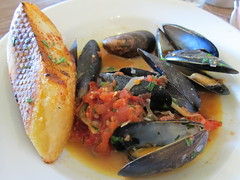 [/caption] Afterwards, we walked two doors down to BLD, which is owned by Neal Fraser (Grace). Chef Diana Stavaridis runs the kitchen, which prepared steamed, tomato and white wine mussels for the tour group. They were delicious with a surprisingly deepÂ flavor to the lightÂ broth. On our way to MILK, we passed the formerÂ location of Grace, whichÂ Josh divulged was relocating to the Vibiana Cathedral in Downtown Los Angeles. A location reversal of sorts will occur, asÂ Chef John Sedlar of Rivera in downtown will be expanding and serving up more casual eats under the name R26 in Grace’s former space. It’s slated for fall of this year. [caption id=“” align=“alignleft” width=“240” caption=“Watermelon Sorbet Ice Cream Sandwich”] 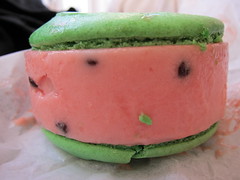 [/caption] At MILK, we enjoyed an array of ice cream served different waysÂ and inÂ a largeÂ variety of flavors. I was luckyÂ to be first in line (or shall we say, prompt?) and secured a cookie sandwich with oversized, flat green macarons encasing watermelon sorbet with chocolate chipsÂ  mixed in, which somewhat resembled watermelon seeds for that delicious and cute factor. [caption id=“” align=“alignright” width=“240” caption=“Josh schooling us”] 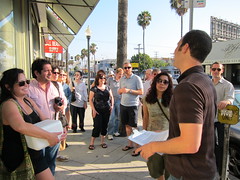 [/caption] On our way over to Fairfax for Golden State, we had some fun history lessons as we passed Stev Arroyo’s Cobras & Matadors, probably the first Los Angeles restaurant to serve tapas. Prior to that, it was Neal Fraser’s joint venture with Arroyo called Boxer. As we worked our way up Fairfax, I was interested to hear that Canter’s Deli actually originated in Boyle Heights and didn’t move to its current location until 1948. [caption id=“” align=“alignleft” width=“240” caption=“Golden State Burger”] 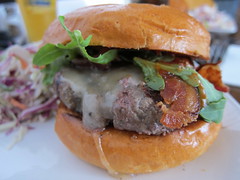 [/caption] At Golden State, where owners Jason Bernstein and James Starr greeted us, we enjoyed a round of radlers, or a mixture of beer and lemonade. I hadn’t had this since my trip to Munich during Oktoberfest a few years ago and so it was a nice piece of nostalgia for me. Of course, I also went for an original, medium-rare Golden State burger with Harris Ranch Beef, Fiscalini Farms Cheddar, Glazed Applewood Smoked Bacon, Arugula, Housemade Aioli & Ketchup and a side of Jalapeno Coleslaw. It does me right, every single time - when I’m not fanning myself from having downed a slice of jalapeno, that is. It hurts so good! This is my first Food GPS walking tour and it made me wish I had attended earlier. I’d definitely go on another one. Not only did I have the best of what Josh had to recommend in the area in one afternoon, I also learned more about my city.