Food Trend: Grapefruit Is All the Rage 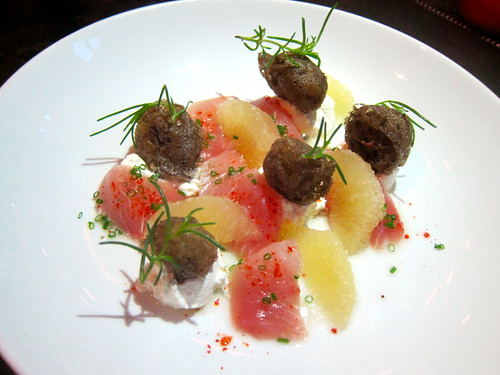 Michael Voltaggio’s Ink: Hamachi with Oroblanco, Smoked Buttermilk Curds, Buttermilk Whey Kombu Bonito, Fried Onions[/caption] With all the different places I eat at from week to week - or more accurately, day to day - I can’t help but take note of the restaurant trends that follow the seasons. Of course, depending on your tastes, this could either be a welcomed opportunity or a temporary annoyance. (Though if you’ve never fallen for the Brussels sprouts or cupcake crazes, then you’re pretty much screwed since it doesn’t seem like either of them will be going anywhere, anytime soon.) [caption id=“” align=“alignright” width=“240”] 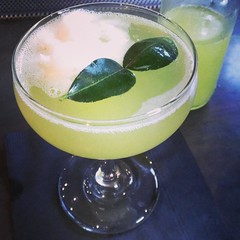 Sgroppino Variation[/caption] Recently, I came upon a few meals in a row where there was grapefruit in at least one dish. Since grapefruits are in season, and thus tasting especially fantastic right now, I had a fun time seeing and tasting what everyone did with the ingredient. And it’s not just in salads, anymore (though Tortilla Republic does a good job of it in their Ensalada de la Casa). It was the acidic component in a sophisticated deli-style trout salad (Sadie Kitchen & Lounge). A complement to Vartan Abgaryan’s fantastic octopus-fennel salad as well as the shining star (along with Passion Fruit) in Matt Biancaniello’s Italian Greyhoud (Cliff’s Edge). I ended up conducting the bulk of my really fun research time at Michael Voltaggio’s Ink - thanks to both he and Gabriella Mlynarczykx - the latter of whom ended up with 5 pounds of grapefruit behind her bar, while the citrus abundance became inspiration for the former. Truth be told, Ink was the perfect site to explore the utmost creativity in both the kitchen and behind the stick with that singular ingredient. And the night before I conducted more fun research at Ink, Michael had actually just added a dish meant to be a riff on the dressed sashimi appetizer you’ve most likely seen at every Japanese restaurant. But this was, oh, so inspired. [caption id=“” align=“alignleft” width=“240”] 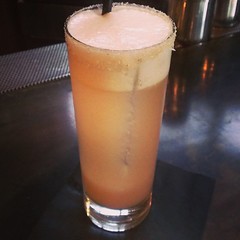 Salty Dog Variation[/caption] Michael made an observation that diners’ palates have been getting more acclimated to and even developing a preference for bitter tastes - a perfect reason to not let any of the citrus go to waste. In his featured grapefruit dish, slices of smoked hamachi and Oroblanco checker a plate underneath smoked buttermilk curds, the whey of which was gassed and even combined with kombu bonito for that subtly salty essence that substitutes for ponzu. The fried onions came whole instead of in flakes typically seen on a sashimi dish. It was a beautiful mixture of tastes and textures that was citrusy, milky and even smokey  thanks to Voltaggio’s out-of-this-world imagination. As for the cocktails: Gabriella’s variation on the Sgroppino was a refreshing take that had some tints of savory and again, smoke, for that extra punch. Oroblanco & Mugwort sorbet sat in a coupe glass topped off with a pre-bottled concoction of mezcal, Oroblanco juice, Suze, Mugwort-infused Floc de Gascogne - all topped with a Keffir Lime leaf. The mugwort and mezcal betray that though it’s a Sgroppino, it’s not exactly a summer cocktail - and what a delicious one it is! She also made this fantastic variation on the Salty Dog. (By the way, they don’t name their cocktails at Ink, so look for a menu or memorize these ingredients, natch.) Gaby calls herself a “saltaholic,” a descriptor to which I can totally relate. The bitter base of the cocktail is the superb 1886 Company Ford’s Gin infused with Oroblanco pith and zest. In addition, Cocchi Americano infused with red grapefruit and Keffir lime leaves, IPA with St. Germaine and saline as well as egg whites comprise the drink, which enjoys a smoked molton salt rim. I loved the balance provided by the St. Germaine, an ingredient that I normally avoid in cocktails as it’s usually a flag that signals “too sweet.” The IPA served as a really good middle ground between the bitter and the sweet, and in no time, I had this collins glass down to the empty straw suck. But who am I kidding, here? You already know whether or not you love or hate grapefruit. So get out there and enjoy your menu perusals for the wonderful fruit - if that’s your thing. I love how chefs and bartenders are employing it in their variations while making the most of the winter season. Oh right - winter’s practically done. Well then - get out there before they’re gone.