Food Trend Watch: For the Love For Finger Limes 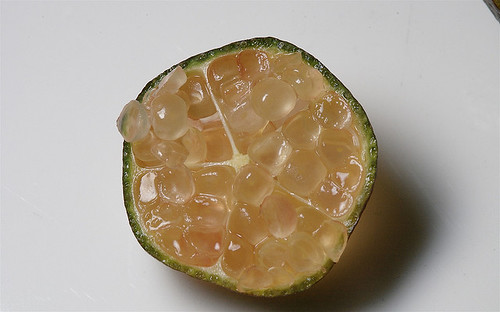 [/caption] Los Angeles loves the Australian finger lime. I’m no expert on the little doodads but I do know a curious fruit with spritely packagesÂ when I see one - especially when theÂ cylindersÂ pop up in multiple places across different applications. And I do know how to Google. Citrus australasica, yes,Â came to the States from Australia over 100 years ago, yetÂ “only in the last six years have disease-tested, legal budwood became available to nurseries for propagating the trees” (LA Times’ Market Watch)_._Â They’ve reached my palate only recently - but in a small span of time. [caption id=“” align=“alignright” width=“240” caption=“Almost-invisible finger limes on crudo at Cube”] 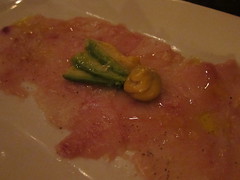 [/caption] The source ofÂ inspirationÂ in ourÂ local kitchens goesÂ undisputed.Â In an age where a commonplace gastronomic trend is to make little spheres of everything, these round, dense bursts of flavor are naturally occurring and sold by James Shanley at the Santa Monica farmer’s market. Laura Avery recently talked to him on KCRW’s Market ReportÂ and David Karp gives the skinny on the fruit with the “gherkin” exterior in LA Times’ Market Watch. Personally, it started out with a dinner at Cube on La Brea. The picture doesn’t capture one of my proudest photography moments but what was memorable were the little citrus caviar scattered across the delicate crudo. It was the perfect way to highlight and accent the fresh flavors of the fish. [caption id=“” align=“alignleft” width=“240” caption=“Valerie Confections’ Pomelo Finger Lime Marmalade”] 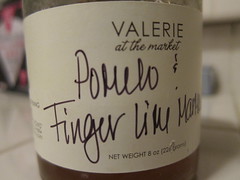 [/caption] Next, came the amuse bouche by Matt Biancaniello at The Roosevelt Hotel’s Library Bar. For the record: If it were anyone’s cocktails that would warrant an amuse, it would certainlyÂ be Matt’s. He cut the 2-inchÂ cylindrical fruitÂ in half, injected a bit of cachaÃ§a into the vesselÂ and instructed me to squirt it andÂ the little roundlings into my mouth. The sweet-tart combo beautifully awakened my senses and it was extraordinary to experience what an onomatopoeia like “pew pew pew” (in the non-lolcat sense) might literally taste like: Lazrs. Finally, during my most recent trip to the Sunday Hollywood Farmer’s Market, I stopped by one of my favorite booths - Valerie Confections. The label on one of their preserves caught my eye - a Pomelo & Finger Lime Marmalade. At this point, it was none other than a sign, so IÂ had to pick it up (and it’s already almost gone.) Â The sour twists of the pomelo and finger limesÂ brought out more ofÂ the peel in the deliciousÂ marmalade. Tiny lime finger slices were imbued inÂ the lightÂ orange preserves - and with the help of crackers and goat cheese, the marmalade was a delicious way to snack at work. I have my eye onÂ these marvelous citrons. I can’t wait for more kitchens andÂ bars to creatively incorporate them into more recipes. Oh - and as far as “food trend” - it may have to wait until next year since we’re already past season, which ended in December. Regardless, restauranteurs, artisans and mixologists have a new fruit with which to experiment.