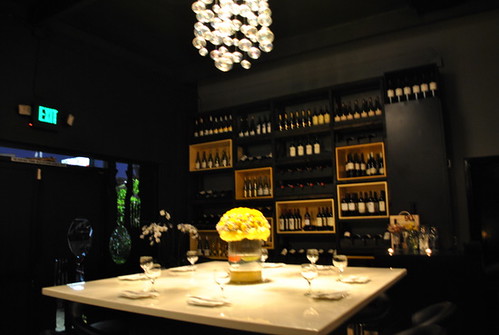 [/caption] A couple days ago, there was an announcement of an alliance formed by Farid Zadi, David Haskell & Susan Park called FOH/BOHÂ³. Derived from Front of the House and Back of the House acronyms (“to the third power” is of no detail), the name is meant to capture the essence of their partnership - the pursuit of proper, hands-on restaurant training from the ground up. [caption id=“” align=“alignright” width=“240” caption=“Pyeon Chae”] 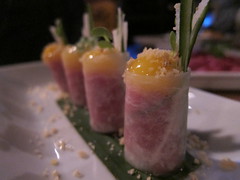 [/caption] The trioÂ wasted no time getting down to business as it has just been announced that they will be debuting at Jenee Park’s (also of Parkâ€™s BBQ and Don Dae Gam) LaOn in Koreatown at LaOn - e*starLA”) (previous review) on Western this weekend. The location of their first projectÂ was secured at thisÂ newish restaurant just 3 hours after their interview with LA Weekly Squid Ink’s Amy Scattergood was finished. It’s a perfect setting for their launch, as Zadi has worked in Seoul for three years as a chef and managing partner at a restaurant. It also is expressive of David Haskell’sÂ intense passion for Korean food. [caption id=“” align=“alignleft” width=“240” caption=“Open Flame Abalone”] 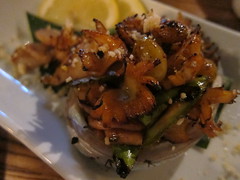 [/caption] Park andÂ Zadi created a special menuÂ of 8 dishes, dubbed “Lucky Cat”, to complement LaOn’s traditional menu. One thing’s for sure: The menu of this “limited engagement” is not to be underestimated.Â Nothing on the menuÂ will be watered down, but instead will showcaseÂ the fabric of what Korean food is all about.Â  â€œI have a lot of respect for Korean cooking. My mother in law is from Jeon-Ju, the culinary capital of South Korea,” Farid says.Â â€œThis isnâ€™t fusion or even modern Korean. Weâ€™re taking Korean ingredients, flavors and techniques and recontextualizing them while retaining the soul of Korean cuisine: the bold, stick to your guts flavors that make it so satisfying.â€ Haskell will be pairing each menu item with a wine or beer, the pairingÂ pours of which will be available for $6 each - or glass pours for $12 each. Expect this pairing experience to evolve your perceptions ofÂ and experiences in Korean food, as I can’t recall a single time I’ve had traditional Korean foodÂ with proper wine pairing. FOH/BOHÂ³’s “front of the house” team will be on-hand to ensure top-notch service throughout both nights. Check out the menu below: LAON MENU (traditional tapas)

So be sure to secure your table now. This limited engagementÂ will sell out fast! Call 323.798.4648 or email David Haskell at magnumdh@gmail.com. (Also note that reservations go til 1 AM - perfect for you nightowls.) Reservation lines are open now.