Five Cocktail Favorites by Mia Sarazen, Who's Shaking & Stirring it up at The Churchill 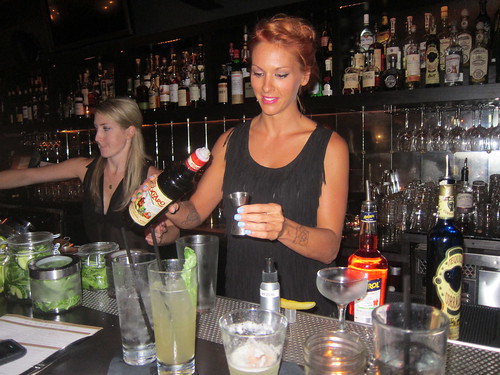 Mia Sarazen[/caption] I think a gal can be considered lucky when she has top-notch bartenders within walking distance from her separately located home and work. I’ve just reached those ranks thanks to Mia’s new position at The Churchill inside The Orlando Hotel. Now, I’ve realized it can be a dangerous thing when, after a hard day at the office, she’s a mere 3 blocks away and on my way home. And this bar is also inside a hotel, so even when I get off early every Monday through Friday, it’s open! [caption id=“” align=“alignright” width=“200”]

Grand Alliance[/caption] I’ve picked out a few favorites on the menu, ultimately narrowing it down to five. Believe it or not, it was really hard to narrow it down, because this post was actually supposed to feature my favorite three! That probably would’ve meant only amaros and browns, but I’ve decided I wanted to give a veneer of diversity on my palate. *wink* I tried the The Grand Alliance before my full tasting and after making a beeline straight from the office. It was a perfect after-work, stirred drink, with Plymouth, Carpano, Campari and Maraschino. Negroni lovers will love this variation. Speaking of the classics, The Churchill Old Fashioned is not to be underestimated. This is because Mia’s ultra-secret mixture of bitters is the magic ingredient. As her (former) coworker and beau Rich mentioned, The Churchill is indeed lucky to have this one on their menu, as Mia has had her secret blend in the works for awhile and The Churchill is perfect for this Old Fashioned’s debut. [caption id=“” align=“alignleft” width=“240”] 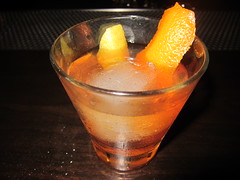 The Churchill Old Fashioned[/caption] The Grapes of Wrath is an outstanding pisco cocktail, made with Kappa, lime, pineapple, egg whites, bitters and cinnamon. With L.A. seeing more and more pisco on its cocktail menus, it’s nice to see a really well balanced drink made with the grape spirit. I appreciated the floral notes in this, which balanced out the slight sweetness. Enough with Pisco Sours! I didn’t expect to favor a tall rye drink, but there it is, the Rye 2 Ways. It’s available up (otherwise known as a Scofflaw) or with the all-favorite Allagash White beer, which is how we had it. I was surprised but realized how well the Belgian white, with its lemon and coriander, complemented the rye, which made for a well-balanced and refreshing beer cocktail overall. [caption id=“” align=“alignright” width=“180”] 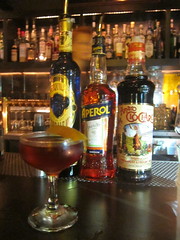 Thirsty in LA[/caption] Taking the cake of the menu, though, was the Thirsty in LA - named after fellow cocktail blogger cohort Daniel. It is a delicious drink. An amaro-reposado tequila combination, the cocktail’s finishing touch was a mezcal rinse, which made for the perfect, slightly smoky touch. This fantastic, stirred cocktail had this savory-ness to its bitterness. So, so tasty, that Daniel need not worry he’s biased simply because it’s named after him - indeed it is a fantastic cocktail! Be sure to look at the entire menu for your other selections. Also recommended is Norman’s Cable Car, which is more to my liking than the original Sidecar - in part because maybe I’m more of a rum gal - and the cinnamon mixed in with the very small sugar rim was a nice touch. Some other notes: Baby’s First Bourbon is always a hit with Mia fans (still available at Harvard & Stone) and will be sure not to disappoint. Have at it The full cocktail menu: [caption id=“” align=“alignright” width=“180”] 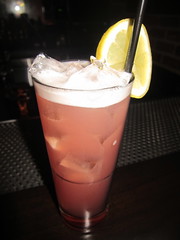