First Taste: Terrine, Whether For Dinner or Brunch, is a Delight 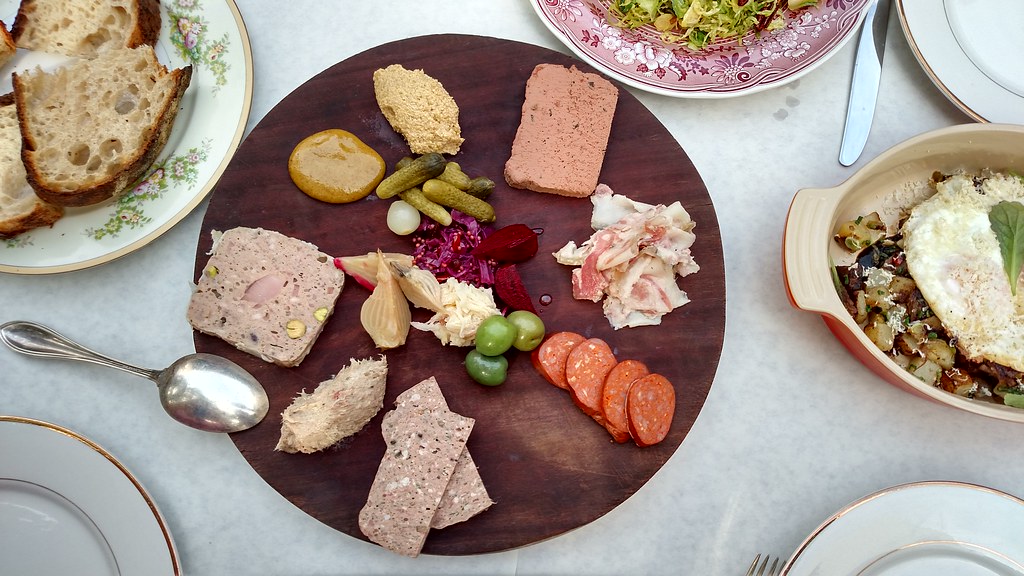 Charcuterie at Brunch[/caption] There have been a lot of openings as of late, and I’ve been lucky to catch a few, because it’s led to some not-so-surprisingly stellar food already enjoyed in the new year. Terrine was no exception during both visits I made: One dinner and one brunch, one week in from when these respective services were launched. Los Angeles has long-awaited this latest venture from Managing Partner Stephane Bombet and Chef Kris Morningstar, most recently of LACMA’s Ray’s & Stark Bar, and the early results show that the restaurant is actually living up to all the buzz. [caption width=“1024” align=“alignright”] 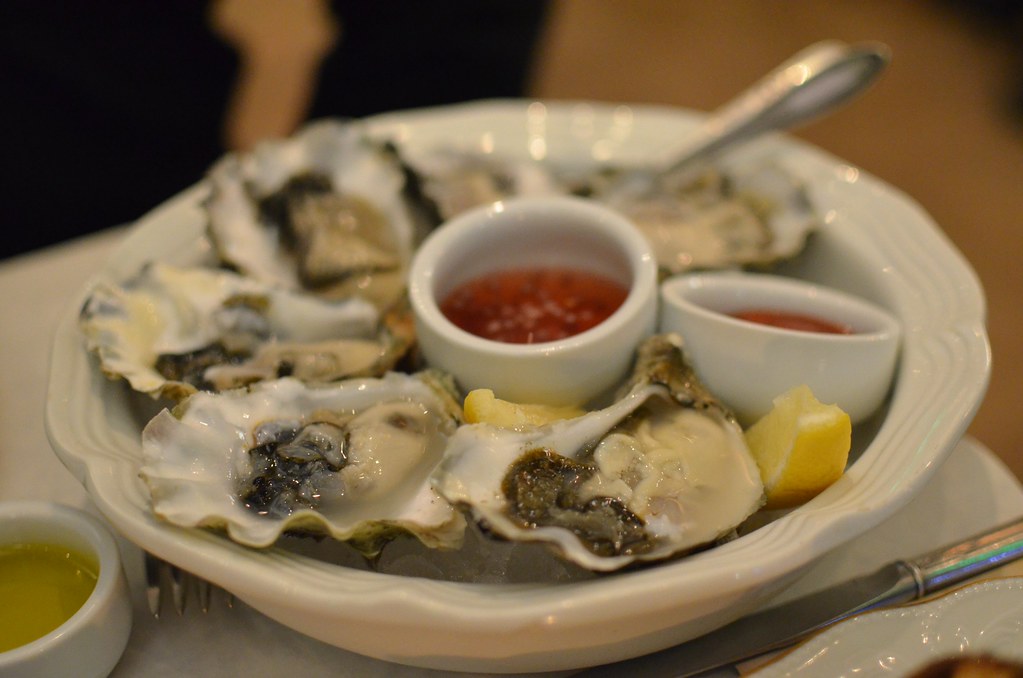 Excellent Hama Hama Oysters[/caption] The great thing about Terrine is that the food is serious, but the atmosphere is not. The ambiance eschews a fussyness that would otherwise put off potential diners curious about food they have every right to be. Expect inventive dishes sprinkled in with a few classics, but all created with classic technique and local, high-quality ingredients. Hors d’oeuvres include Chips & Dip, Onion Soup, Veal Tongue, Lamb Breast, Mushroom Salad and Crispy Pig Ears. Mains, or Pièces de résistance, showcase more gems like Agnolotti with truffled rice filling, Half Mary’s Chicken with chermoula, Boudin Noir, and Buckwheat Strozzapretti with veal meatballs. We had wine pairings throughout the night, the wine program put together by Wine Director and Partner Francois Renaud. I couldn’t help but gleefully note that our sparking rosé was correctly poured into a coupe glass rather than a flute. [caption width=“1024” align=“alignleft”] 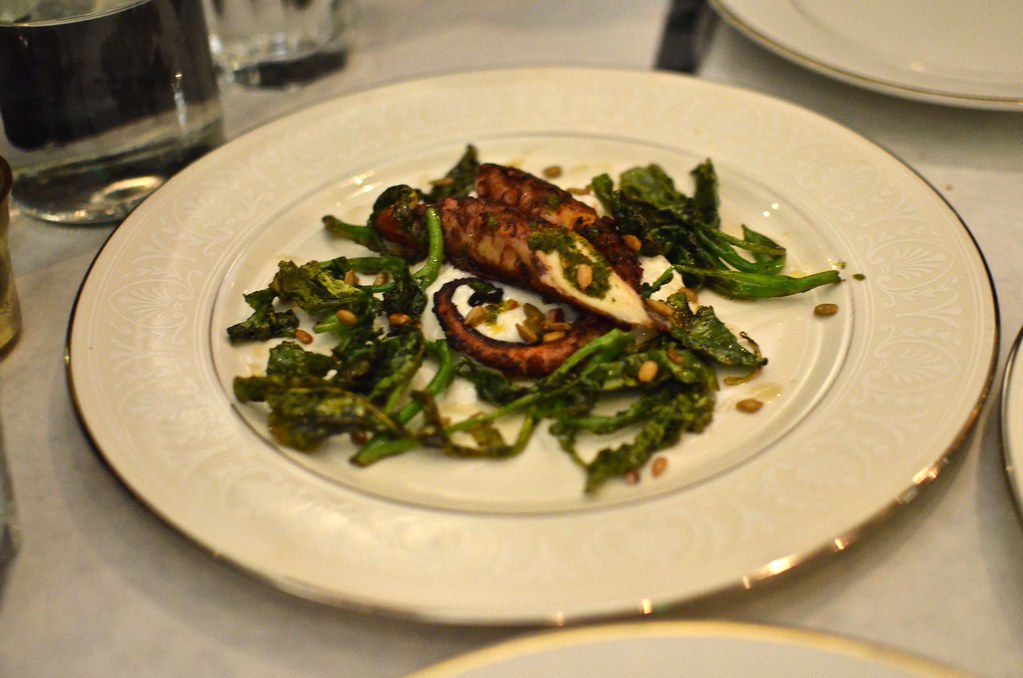 Octopus, toasted broccoli, burrata, sunflower seeds, salsa calabrese[/caption] Along the side of the menu is where you’ll find a handful of crisp pizzas as well as dishes served with fries, or frites, if you will. This includes their self-proclaimed “City’s Best Fish & Chips” along with Moules Frites (both have yet to be experienced), a 24 oz Cote de Boeuf, and an ever-luxurious Bavette Steak, which I would certainly order again. Terrine espouses the perfect definition of a California Brasserie. [caption width=“1024” align=“alignright”] 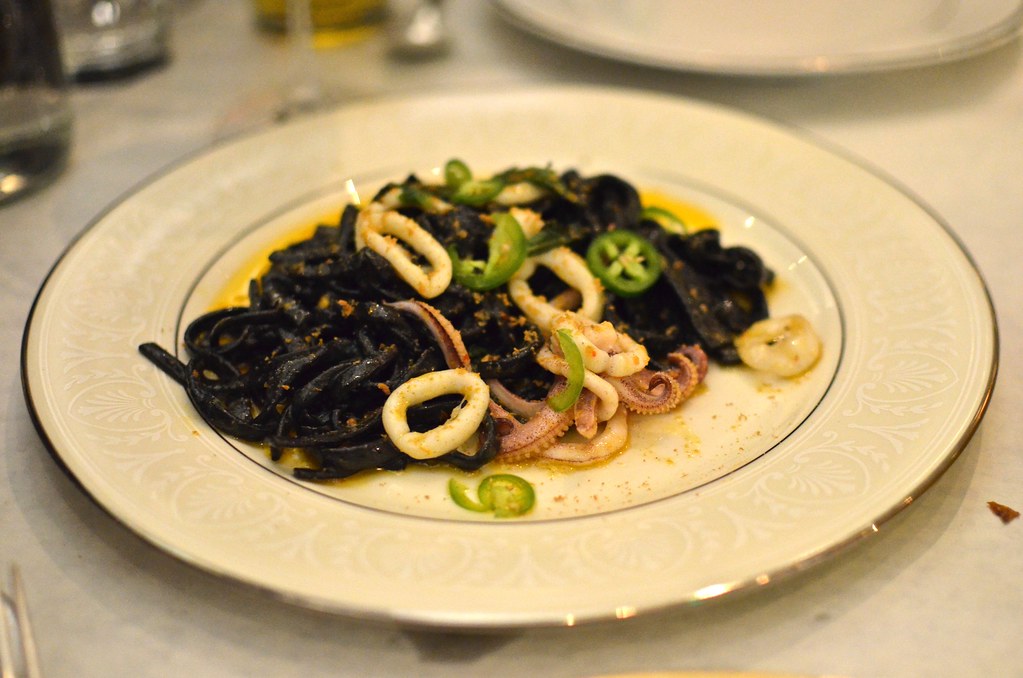 Squid Ink Tagliatelle, serrano chile, basil, bottarga[/caption] But I get ahead of myself. First! The charcuterie – yes, all of it – is a must. You don’t have the option of half-assing this particular meat board, and that’s a good thing. All of it is pretty great, so you just go all in. It includes Pork Rillettes, Terrine de Campagne, Spanish Chorizo, Liverwurst, Andouille, Truffled Chicken Liver and a fantastic, coarse mustard. You order it no matter what the meal, whether you’re at dinner anytime during the week or brunch, served Friday through Sunday. It sets the proper tone for the rest of the meal. It’s shared with the rest of your table, even if you don’t want to share anything else. I appreciate how the traditional French dish designations serve as a welcome departure from the small plates template we’ve been seeing everywhere as of late. [caption width=“1024” align=“alignleft”] 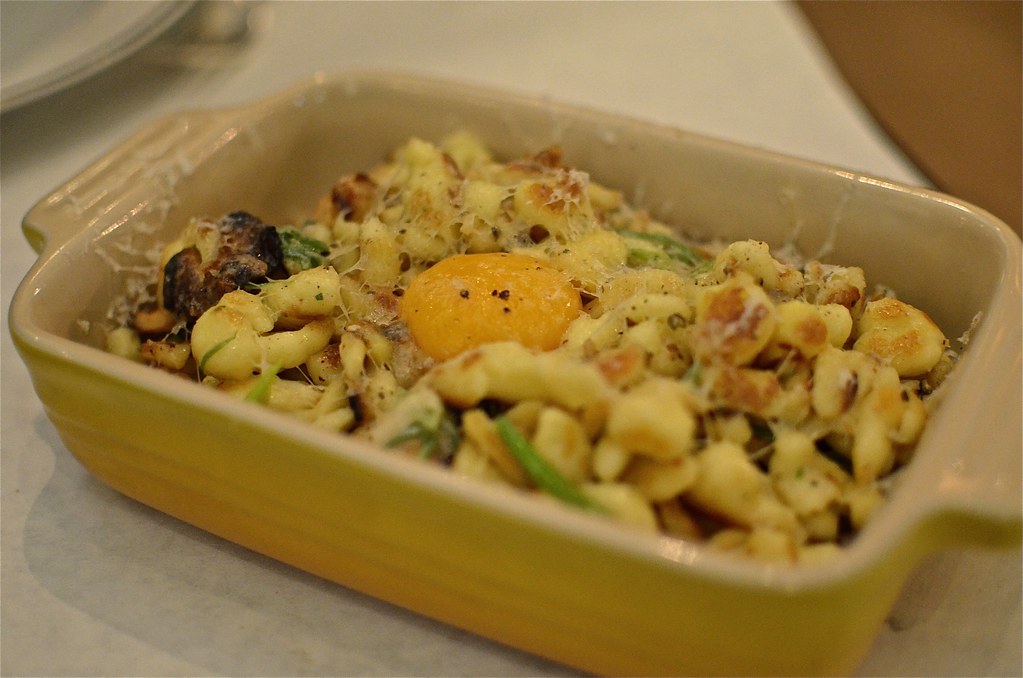 Herb Spaetzle, chanterelles, scallions, pecorino, farm egg[/caption] The Squid Ink Tagliatelle was delicious - perfectly al dente and the deliverer of just the right amount of heat that has you wanting more. The squid rings were a perfect pairing for the thicker-than-usual pasta noodles loosely folded upon the plate. I also loved the Herb Spaetzle, most certainly the fluffiest version I’ve ever had and made from four different flours, our server informed us. The chanterelles also complemented the bite to its texture, and the dish had this perfectly rich, toothsome flavor to it with the egg and just enough pecorino. And then there’s the Bavette Steak, a glorious five strips of some of the most luxurious, tender 8 ounces that have hit my buds in quite awhile. [caption width=“1024” align=“aligncenter”] 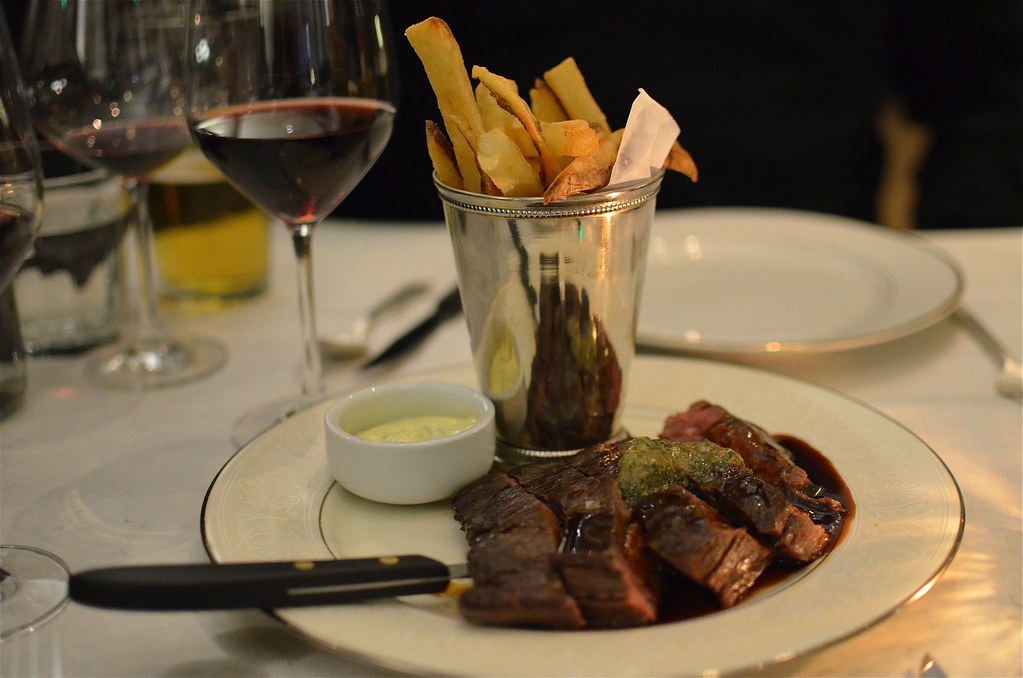 Bavette Steak[/caption] It’s covered in just enough bordelaise and chermoula, but the real star is the quality of the cut, and the meat, itself. It was cooked perfectly in all its rare-side-of-medium-rare glory and had this amazing tenderness and taste. I would easily order it again. [caption width=“1024” align=“alignright”] 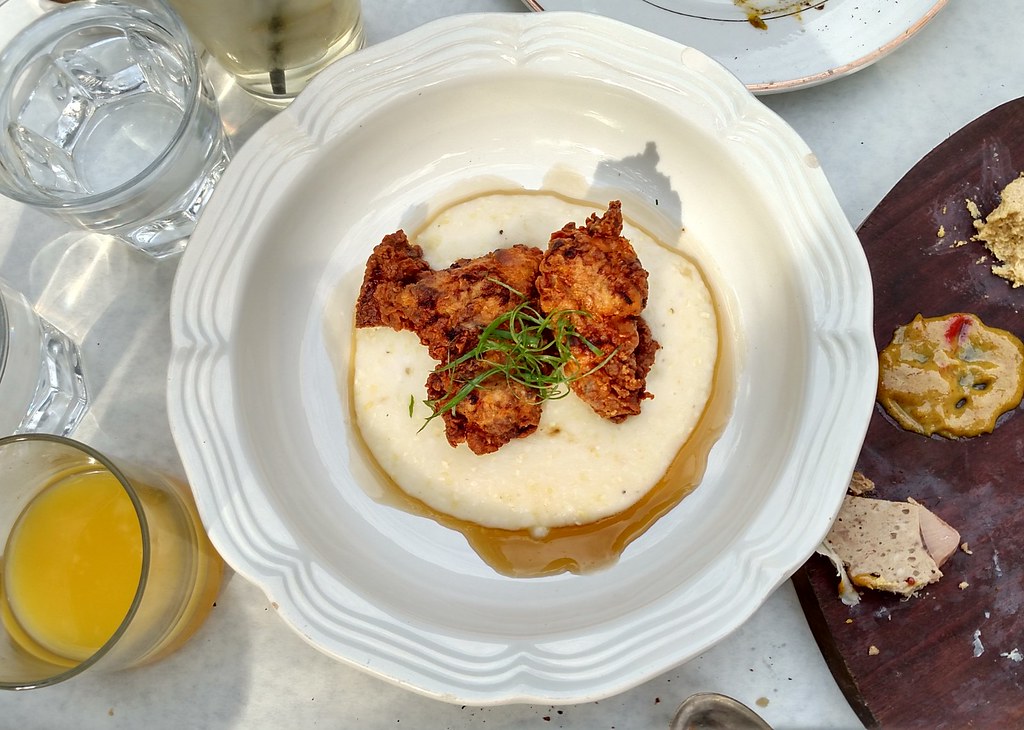 Spicy Fried Chicken[/caption] And already, Terrine has launched brunch. This weekend will mark their 3rd weekend of service, and the great thing about it is that they also serve it on Fridays in addition to the rest of the weekend. The patio in the rear is a great setting for ladies who lunch and…dudes who dine. But so is the dining room, since there’s plenty of natural light to fill the entire space for a cheery or casual daytime meal. The Spicy Fried Chicken was also sweet thanks to a layer of maple on the bottom of the dish, and the bed of grits on which the extra-rich and delicious chicken lay were superb. (I never say grits in Los Angeles are superb.) Spice-lovers will love the Eggs in Purgatory, a fiery tomato sauce-egg casserole like you’ve probably never had. I loved my House-smoked Beef Brisket Hash, which had a magic grating of horseradish on top that was a great touch. And the cheesy, eggy Croque Madame was more than capable. Saddle all of that up with one of the classic cocktails Ryan Wainwright has selected for the smaller, daytime cocktail menu, and you’re set. I’ll be back to Terrine to try some of the dishes that I’ve missed, during both services. In all, though, it’s best that you run, not walk, to Terrine for your own taste. There’s a lot of both well-executed classics and inventive dishes coming out of Kris Morningstar’s kitchen; it’d be a travesty not to try. All food and wine were hosted.