First Taste: Son of a Gun Is Not Your Mother's Cooking 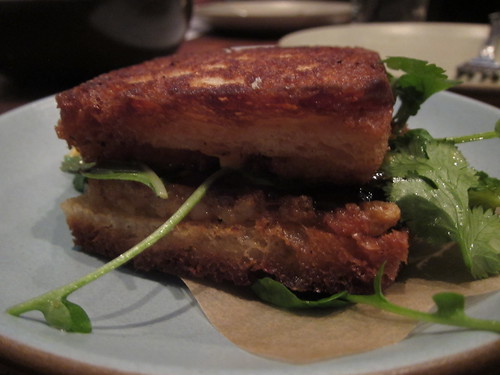 [/caption] The Animal boys are back at it with their heavy hand. This time, the medium is seafood, and there were certainly more hits than misses when I made my first visit last week. [caption id=“” align=“alignright” width=“240” caption=“Lobster Roll | Celery, lemon aioli ($7)”] 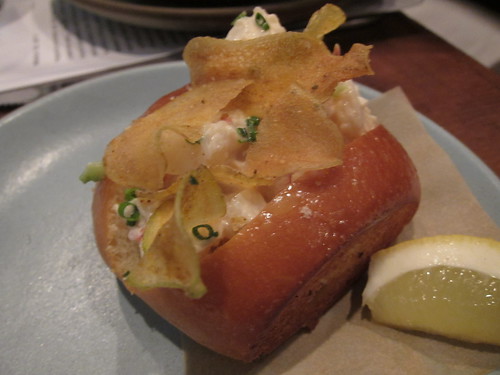 [/caption] We started out with a lobster roll each, and were all glad that we turned this “shared plate” into a “per person” situation since it’s on the small side. It was a solid, Maine-style (with mayo) lobster roll with chips on top as a nice, crunchy touch and came in an appropriately buttery bun. Case closed. The shrimp toast came next, and it was a quintessential umami moment. All conversation ceased as we chewed and thought, our tastebuds absolutely titillated, our eyes shut. We observed and relished the same reaction elicited from our neighbors by the dish at the large communal table at which we sat. This was a shared moment where I found myself not so annoyed by the communal, mess hall-style dining. On the other side of them, however, sat a New York food writer/ex-pat of a full year who amazingly stated that he didn’t believe Mexican food was better in LA than in New York. That’s another story. ;) [caption id=“” align=“alignleft” width=“240” caption=“Brandade | Soft egg, arugula ($12)”] 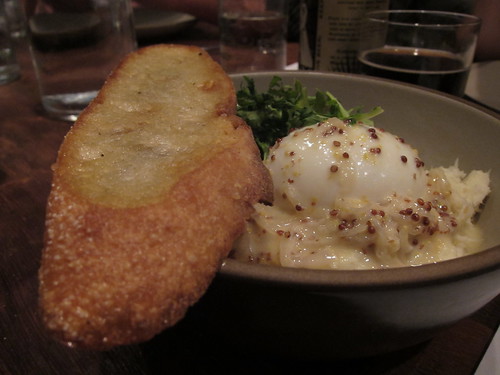 [/caption] Next came the brandade, which, not to belabor the point, was another essential small plate. The texture of the cod mixture was perfect - not too mushy, not too tacky. The whole grain mustard seeds kicked it up a notch. Though there might have been a period of time not so long ago where I was sick of seeing it everywhere, arugula was a nice choice, here, as the accompanying greens. The bitterness matched the mustard seeds really nicely. Of course, the runny egg with runny yolk is no small detail. What you have here is a bowl full of win. While everything we had thus far was pretty rich, it wasn’t too much. But it was nice to mix things up with the Albacore Tataki, which was seasoned just perfectly with radish, citrus soy and a few sesame seeds. You could taste the freshness of the fish, and tt was a refreshing reprieve from all the other butter-based dishes we had. I’d order it again if only I weren’t so curious about the other fish dishes on the menu (like the Pink Grouper). [caption id=“” align=“alignright” width=“240” caption=“Albacore Tataki | Sesame seeds, radish, citrus soy ($12)”] 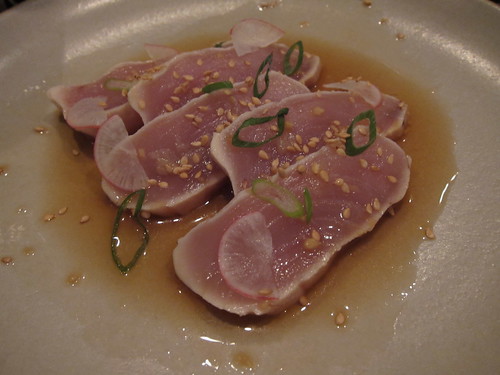 [/caption] We had heard that the Fried Chicken Sandwich ($11)Â was a must-order, and so we did exactly that. It had a tasty, peppery breading surrounding hot, tender chicken. The jalapeno coleslaw with pickles was a really nice touch but I actually found myself wishing there were more jalapenos and much more kick in it. It was still solid, though. The Alligator Schnitzel with hearts of palm and oranges ($14) came last, which was really the only miss in our whole meal. The schnitzel was largely forgettable and seemed an item that was put on the menu in order to widen its range. No matter. There are plenty of other delicious items to try. With the menu changing daily, depending on ingredients, I feel like I had barely scratched the surface that is Son of a Gun. It’s a bustling dining spot with mostly communal tables and walk-inÂ opportunities. They also have a good selection of cocktails (I did enjoy my Sazerac, but consumed it while occupying “standing room only”) which range from $8 - $16 and is only more reason why I feel like I need to go back. Although they’re open until 11 PM or even 1 AM on the weekends, they do run out of favorites. Don’t wait - it’s a really exciting place to eat. Just don’t be surprised if you bump a few elbows; it’s guaranteed you will.