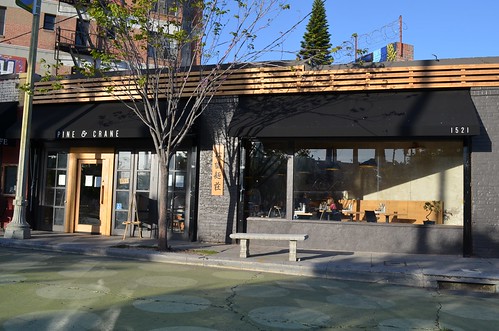 Pine & Crane Storefront in Sunset Triangle Plaza[/caption] As a 2nd generation Taiwanese American, I often wondered during childhood how different my life would’ve been if, like many of their classmates in Southern Taiwan, my parents had settled in Arcadia, California instead of New Berlin, Wisconsin. My only access to Taiwanese (adamantly never Chinese) food was through my Mom’s cooking. As the 4th of 4 kids, though, my parents were financially able to travel by the time I rolled around, and I luckily traveled to California and Taiwan often to keep somewhat in contact with my roots. As my palate matured and diversified over the years, it was also groomed for the innate craving for noodles, broth and spice I continually have today. [caption id=“” align=“aligncenter” width=“500”] 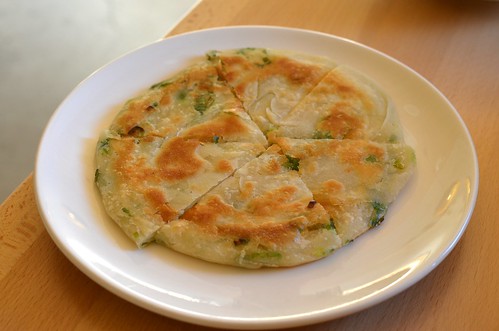 Scallion Pancake[/caption] While at UCLA, I’d catch rides with friends from Westwood to San Gabriel Valley for boba milk tea and Chinese cafe food or Taiwanese small plates at Old Country Cafe on a twice-weekly basis. Although I continued to move eastward since graduation, I had always relegated worthwhile Taiwanese food to a willingness to drive that way. I thought now that I was in Silver Lake and, say, Din Tai Fung expanded to Glendale, I was now the closest I had ever been. [caption id=“” align=“alignright” width=“150”] 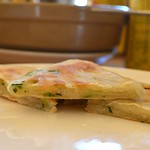 Cross-section[/caption] And then arrives Pine and Crane, a mere walk or short bike ride away. A godsend. For the first time in my life, I had food representative of the motherland in my own neighborhood in a beautiful interior with wood pine, concrete and plenty of natural light. Still in their soft opening, Pine and Crane haven’t started offering beer, yet - but you’ll be able to choose from any of their teas sourced directly from Taiwan. They have a trio or more of cold salad appetizers on offer, including wood ear mushroom, seaweed and thinly sliced pig ear - the lattest of which was my favorite, but which chewy texture might be startling to those who aren’t accustomed. They let you taste test these apps at the counter as you order, which is helpful. [caption id=“” align=“aligncenter” width=“500”] 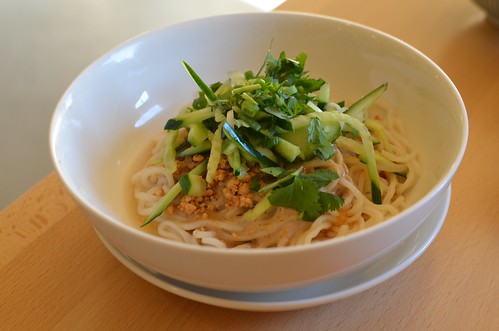 Dan Dan Noodles[/caption] The Scallion Pancake successfully achieves that crispy outside and just-doughy-enough inside. The Dan Dan Noodles were more sweet and peanutty than spicy, with crushed peanuts, julienned cucumbers and cilantro leaves on top of some really stellar, thin noodles that were springy to the bite. The Zha Jiang Noodles and Wonton Noodle Soup will have to wait until next time. [caption id=“” align=“aligncenter” width=“500”] 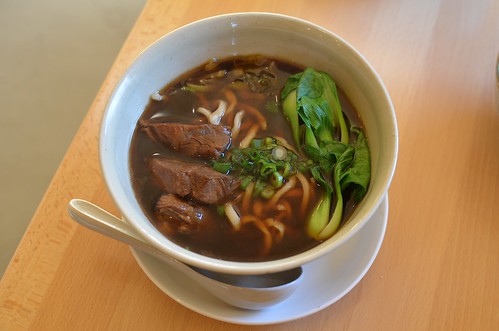 Beef Noodle Soup[/caption] Understandably, you won’t find any tendons in their soy-based Beef Noodle Soup here; that might just be too adventurous for the audience. What you will find is a really tasty beef consomme for the broth - much more complex than you’d expect out of Silver Lake and truthfully, more refined than many you’d find in SGV, bowls of which are often laden with gristle. Chewy, thick noodles do a great job sopping up the flavor in a bowl topped by tastefully braised, marbled beef chunks and baby bok choy. Chili oil among other condiments are found at each table for desired, added heat. As I tend to prefer thinner noodles, it would be great if, in the future, they made the option of choosing between thick or thin noodles. [caption id=“” align=“aligncenter” width=“500”] 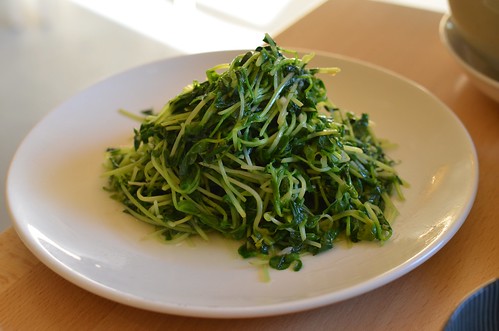 Pea Shoots[/caption] The dearth of Asian groceries in the area, with Korean and Thai being the exception, brings me to the option of being able to take home pea shoots, bok choy and other vegetables straight home to your kitchen from the Ku’s family farm. They are also on offer to enjoy at the restaurant, prepared by sauteeing with garlic as is customary. [caption id=“” align=“aligncenter” width=“500”] 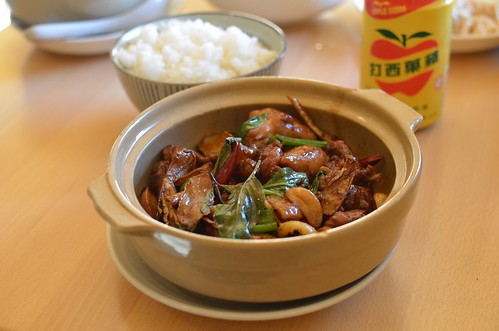 Three-Cup Jidori Chicken[/caption] The Three-cup Jidori Chicken was en pointe. Utilizing organic, free-range chicken in a traditional Taiwanese dish is certainly not an option you’d find in SGV. According to tradition, each chicken calls for one cup each of soy sauce, rice wine and sesame oil in the recipe. Each bite of chicken was juicy and flavorful, with the ginger slices cooked just right. Vegetarians can get Three-cup Trumpets, instead. [caption id=“” align=“aligncenter” width=“500”] 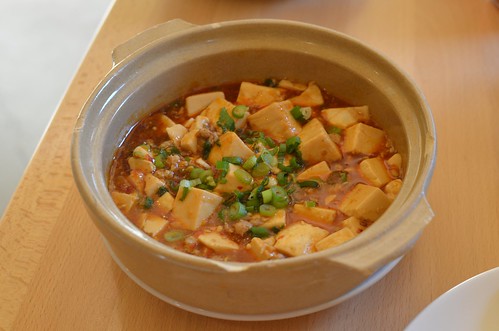 Mapo Tofu[/caption] The classic Mapo Tofu is an awesomely aromatic and subtly spicy dish of soft, silken tofu cubes, bits of ground pork and green onions. It’s gentle but so tasty and simple; you can feel a slight tingle on your lips. What I love most about Pine and Crane is that its location in Silver Lake is a great reason to hearken to incorporating fresh ingredients with traditional Taiwanese dishes in a real, not cut-and-paste, way. It becomes tantamount to its food philosphy, without its location justifying the restaurant’s mere existence or a reason to apologize for its lack of authenticity. As much as I frown upon the never dying conversation about authenticity, I would venture to say that Pine and Crane is pretty damn near as authentic as it gets. My next task is to try the spicy wontons, dumplings and other small plates. Proof that you won’t be able to cover all the stops in one sitting unless you bring an entourage. And on that note, don’t be afraid to order more than you can eat in one sitting. If you take anything home, remember that the rice dishes reheat the best. Further reading: Taipei, Taiwan: 72 Hours of Beef Noodle Soup at 72 NRM [caption id=“” align=“aligncenter” width=“500”] 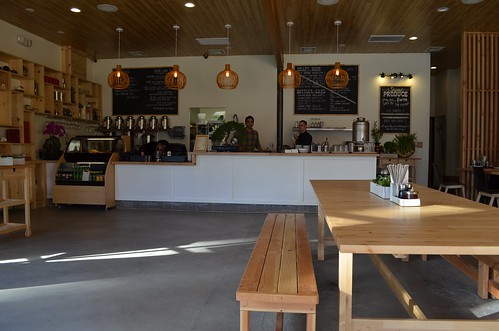 Order at the counter; food is brought out to you.[/caption]