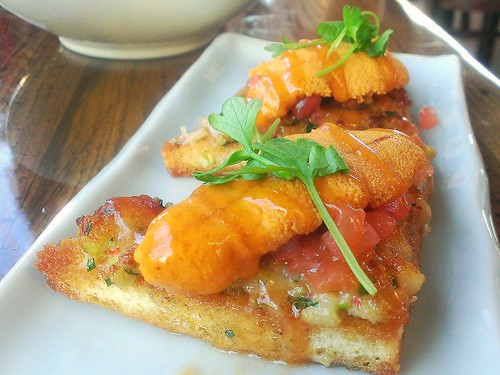 Uni Shrimp Toast[/caption] While I caught a peek of the new Marina del Rey restaurant’s interior and fare through one of the Best New Chef reunion dinners brought to Paiche by Food GPS (Portland’s Naomi Pomeroy was guest chef), last night was the first time I got a real taste of Ricardo Zarate’s new menu, taking center stage, thanks to a lucky invite to Friends & Family night. It’s a wonderful thing to be the first reservation to walk in at 5:30 PM. While it doesn’t allow me to comment fairly on how well the opening service acumen applied to everyone, it did allow my guest and I tip top pacing throughout our senior denizen-timed meal. Every round of dishes came out very timely, just when we were finished with the former. It was packed by the time our 6-plate meal got well underway, so I hoped that everyone else also had the same experience. Everything was flavorful, well-proportioned and outright delicious. The menu is beautifully arranged and organized according to salads and appetizers, sashimi-style ceviches, tiraditos (raw Peruvian dishes), fritters, anticucho grill, hot plates, vegetables and desserts. The recommendation is to get one from each section, with an average of three plates per person, to keep everyone sated with a variety of dishes. No dish, save for the fancy fish stew, is over $20. Another recommendation? To get the Uni Shrimp Toast. Yes, I will admit as much as the next food writer that uni is your trump card, but Paiche serves up uber fresh, melt-in-your-mouth uni that would rival the best sushi restaurants. And each of the layers, including the shrimp paste and the crispy toast itself were perfectly proportioned and all tied together with just enough rocoto honey sauce to make for one hell of a fritter. Do not miss. And of course, it wouldn’t really be an _Izakaya_ (that is, drinking) place without a solid cocktail program. Thanks to Deysi Alvarez, there’s a solid showing of not 10, but 18 cocktails in all. So whether you crave cognac, cachaça, rum, pisco or whatever, there’s at least two cocktails that will be sure to wow you while complementing the food. I leave you with my photos and notes. Paiche opens April 12. See you on the Westside.  [caption id=“” align=“aligncenter” width=“500”] 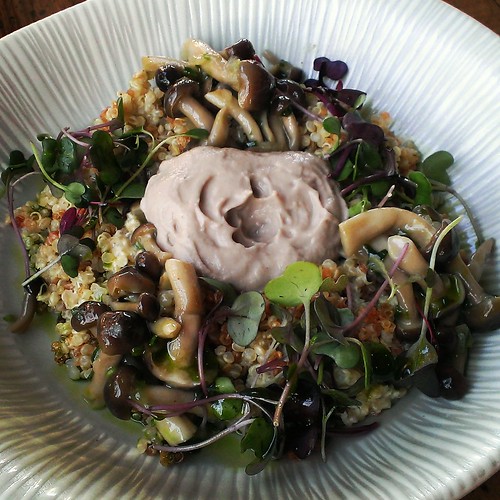 Ensalade de Quinoa - While seafood is the star of Paiche, the appetizers like this crunchy quinoa salad and Shimenji mushrooms is finished off with a really tasty Hucatay dressing[/caption] [caption id=“” align=“aligncenter” width=“500”] 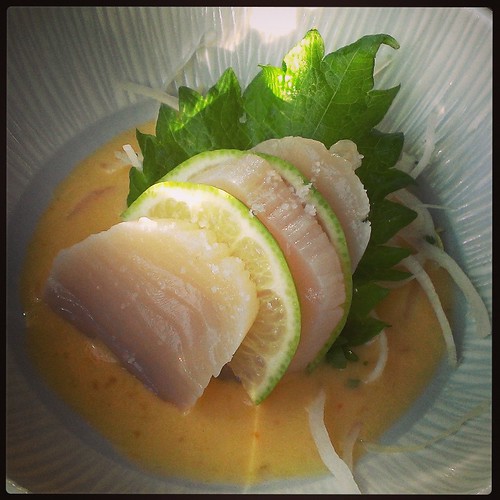 Jumbo Scallop Ceviche - You’ll find the sashimi-style ceviches in this delicious citrus sauce, with the true quality of the seafood singing through. I loved the shiso for an aromatic and delicious garnish.[/caption] [caption id=“” align=“aligncenter” width=“500”] 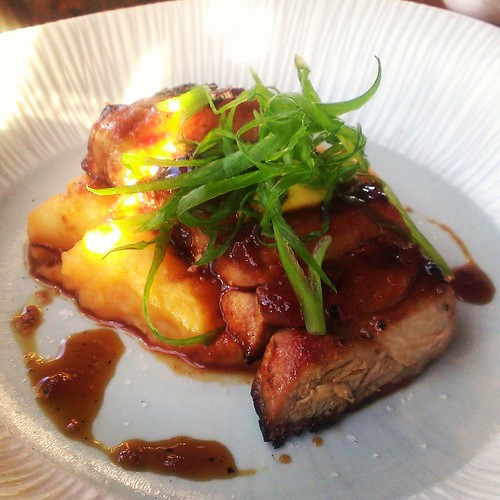 Pork Neck Anticucho with Gochujang - Absolutely loved the grilling flavor on this tender meat, and I can’t wait to try other Anticucho.[/caption] [caption id=“” align=“aligncenter” width=“500”] 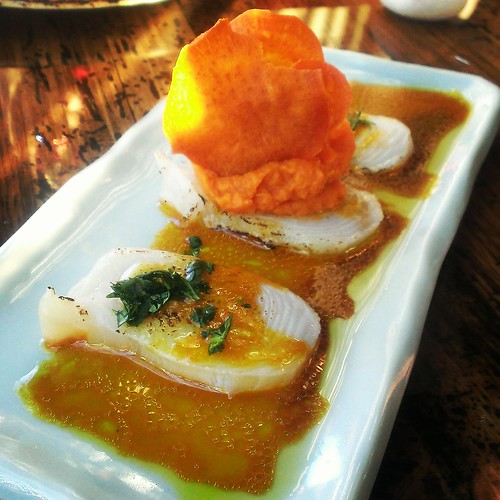 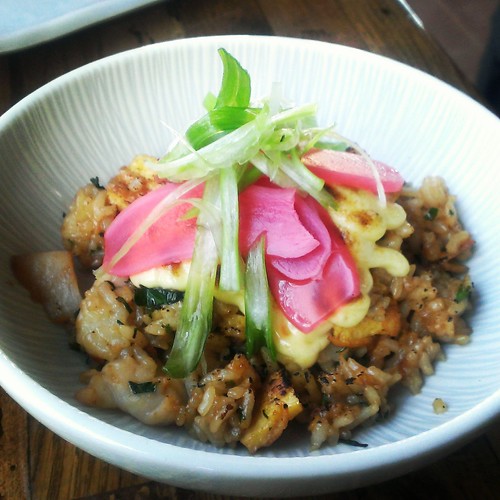 Chaufa de Langosta - Only fitting that this lobster and mixed seafood fried rice was the last to come, similar in Asian traditions. But the flavor was so savory, and I loved the pickled radishes and green onions topping the pile.[/caption] [caption id=“” align=“aligncenter” width=“500”] 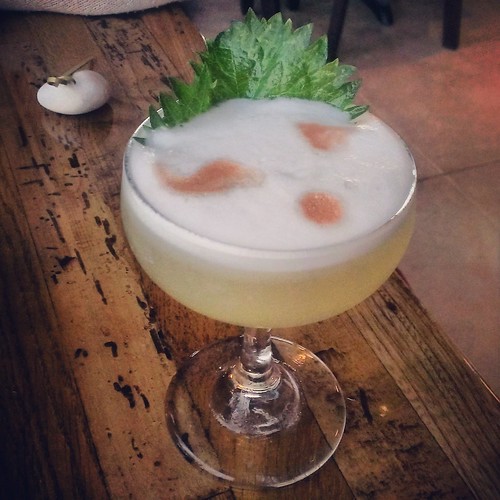 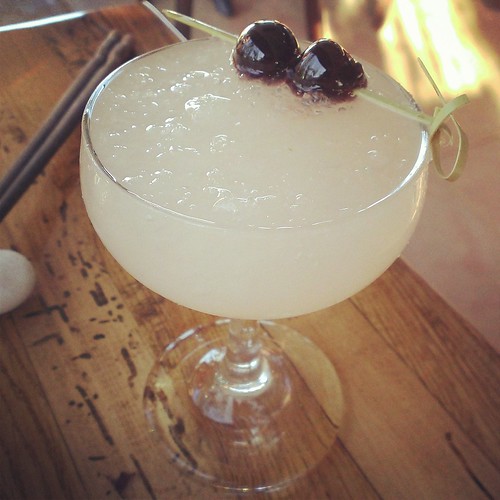 Papa Hemingway - A perfectly executed classic, made with Matusalem Rum, lime juice, grapefruit juice and Luxardo Maraschino. I did all I could to not steal this from my girlfriend. Good thing I loved my first cocktail, too.[/caption] [caption id=“” align=“aligncenter” width=“500”] 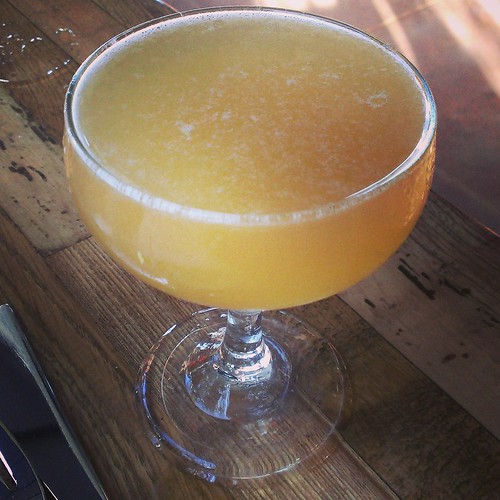 Champs Elysees - Pierre Ferrand Cognac, Green Chartreuse, lemon juice, simple, Angostura, lemon essence. Such a beautifully easy to drink cocktail for one with cognac as the base, but not dumbed down.[/caption]