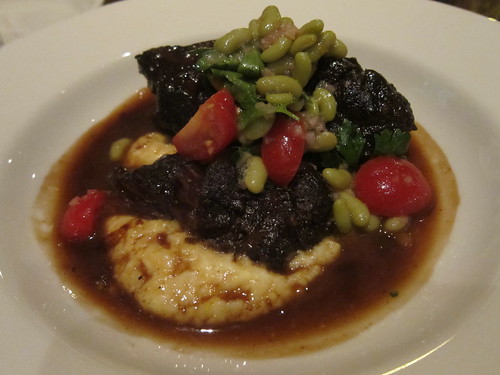 [/caption] With the Gastropub Category in Los Angeles having undergone some oversaturation the past couple of years, it’s easy to dismiss the incoming restaurants that effuse that now-cookie cutter, industrial feel, which may or may not serve as a backdrop for small plates served at communal tables. [caption id=“” align=“alignright” width=“240” caption=“Pacific Seafood Soup | Mussels, clams, shrimp & rockfish with wild fennel”] 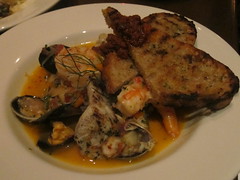 [/caption] Itâ€™s not to knock small plates. Iâ€™ve always been more a grazer than one to focus on the entrÃ©e at the center of my meal. Iâ€™m not knocking communal seating, either, since I far prefer bar seating myself. Yes, it’s also “farm-to-table,” as much as I loathe how hackneyed that term has become. But it doesn’t discountÂ the restaurants where it’s actually a practiced philosophy - only at those where it’s feigned. I guess what remains, then, is really how interesting these small plates are, from the appetizers to the medium dishes to the family-style roasts and main events. What the particular chef’s spin on savory might be. Yes, you can guarantee that there areÂ beets and braised meats on the menu - but why come here as opposed to any of the other gastropubs in the city? [caption id=“” align=“alignleft” width=“240” caption=“Tagliatelle | Braised rabbit, picholine olives & lemon zest”] 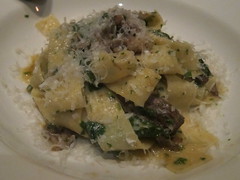 [/caption] At least one answer would be its advantageous location on Beverly Blvd. Beyond that, though, my lone experience at Cookâ€™s County was a surprisingly stellar one. With Chef Dan Matternâ€™s previous post being at AMMO (a place I always had a mind about revisiting more often than I have) and his citing Mark Peel, Nancy Silverton and Suzanne Goin as mentors in the kitchen, youâ€™ll find the taste of his dishes reflecting his practice of utilizing fresh produce while highlighting the properties of each dishâ€™s ingredients.Â Thankfully, no flavors are masked - just beautifullyÂ enhanced.Â Each dish stops just short of going too far but holds its own with each ingredient serving its purpose in the whole. The flavors pop. [caption id=“” align=“alignright” width=“240” caption=“Wood-grilled Duck Breast, Brussels Sprouts, Kabocha Squash & Almonds”] 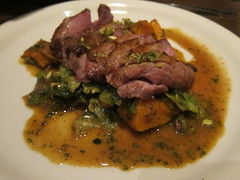 [/caption] I really enjoyed the bulk of the mains. The appetizers, which could have doubled as salads, had arugula weaving a common thread through themÂ â€“ though they were mostlyÂ tasty in and of their own. Next time, I might order just one under that columnÂ and be done with it. Or, I’ll go straight to the mains. Though I wished the Pacific Seafood Soup was more soup than broth, it was because I was sopping up the last of whatever was in the bowl by the end of the night. Awesome, rich flavor. And it’s not like I haven’t seen Rabbit Tagliatelle before, but this rendition was tops. The freshly made pasta was no detail, and the rabbit was deliciously tenderÂ as was the lemon zest a nice seasoning. [caption id=“” align=“alignleft” width=“240” caption=“Meyer Lemon Angel Pie “] 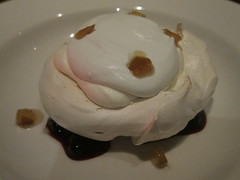 [/caption] The braised beef cheeks were as heavenly as the bean salsa that topped it was unexpected. The accompanying tomatoesÂ made forÂ sweet, little bursts of flavor in the rich canvas. But the wood-grilled duck breast was exceptional. Granted, I do love brussel sprouts all around as I do kabocha squash, but I’d be hard-pressed to find duck that flavorful in all but a few restaurants around L.A. There’s a modest international selection of beers availableÂ but a larger wine list for vinos. I can appreciate the simple menu at Cook’s County, because I’m a believer in too much selection abetting too much indecision (personal quirk). It lends an appreciation forÂ the focus it takes to perfect those delicious mains. And, they do lunch and brunch. Those are certainly now on my to-do list. I hope Cooks County is here to stay. Though gastropubs are now a dime-a-dozen, this one stands head and shoulders above the rest. It may be named after the county which seats Chicago, but Beverly Boulevard and Hancock Park can be proud (and on the weekends, they can be proud until 1 AM). P.S. - Don’t forget dessert. That Angel Pie was divine.