First & Hope Supper Club: Because She's In That Part of Downtown 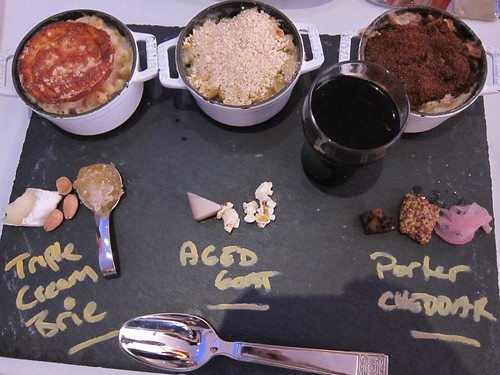 [/caption] Engage her only a little, because you might get her worked up. Leave soon, before you find her trying too hard to keep you there. Know her for her strengths, be cautious of her weaknesses - of which there are many. If there were a list of those weaknesses, it would be the majority of her menu. [caption id=“” align=“alignright” width=“240” caption=“Amuse Potato”] 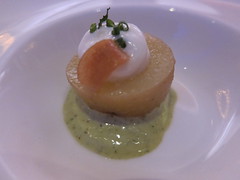 [/caption] She was up-front. The featured quote on her website is by Coco Chanel: “Luxury must be comfortable, otherwise it is not luxury.” Though Coco undoubtedly valued substance, the focus of First & Hope is on appearances - starting with the intent to impress, overcompensating by talking too much - as if the ingredients in her dishes were names in entertainment. Like the amuse bouche we were provided: A simple fingerling potato with creme fraiche was executed well, but as with all bad romances, beginnings are ever so misleading. [caption id=“” align=“alignleft” width=“240” caption=“Moonshine Meatloaf - $27”] 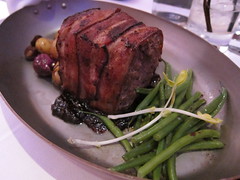 [/caption] …And as you escape to the opera, or the L.A. Philharmonic - remember the style and class First & Hope Supper Club exuded, as that would be her heavily weighted strength. Remember the deftly chosen Mac ‘n Cheese flight - another of her few strengths, and by a landslide. How the Triple Cream Brie pot was so deliciously rich and the natural honeycomb cut across it so well. Remember how the Aged Goat flavor contrasted well with the inherent creaminess of a well-bakedÂ mac ‘n cheese. How deliciousÂ it was to wash down the sharpness of a cheddar mac withÂ dark Porter.Â And how through it all, you basked in the high-class essence ofÂ the blue-tinged light… [caption id=“” align=“alignright” width=“240” caption=“Crabmeat Justine Pot Pie”] 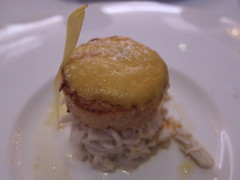 [/caption] Like all those who give way too much, however, you’ll have to stay disciplined for the both of you. If there ever were so blatantly brandished a trump card like foie gras, know that when combined with even high-quality ground chuck to make meatloaf, itÂ will not work. Even the blackened bacon which wraps it cannot save it nor the green beans which accompany it. Back away; she tries too hard and the results are disastrous. Back to the menu, where she starts byÂ talking too much. What a tiny little and unremarkable crabmeatÂ ”pot pie” (where the pot was, I’m not exactly sure) she serves up for $13. The significance of the buttery french toast topping was lost on me. And there’s nothing “grits” nor popcorn about the Popcorn Shrimp & Grits ($17). Truth be told, I didn’t see what her point was in either of these and felt rather underwhelmed by the prospect of paying so much for small dishes that didn’t deliver…for free. [caption id=“” align=“aligncenter” width=“500” caption=“Duck-Duck-Goose (Sugar & Spice Seared Duck Breast, Duck Leg Confit, Roasted Foie Gras, Spring Onion Hoe Cake & Wilted Baby Mustard Greens) - $28”] 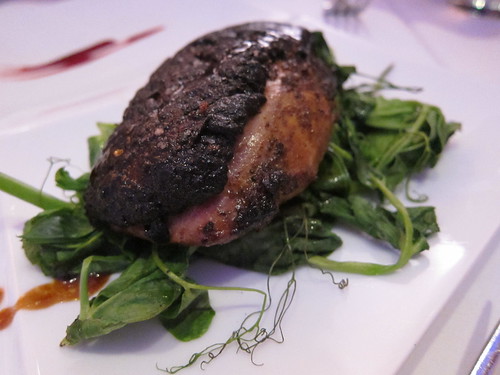 [/caption] If there were one other strength at First & Hope, it would certainly be the Duck-Duck-Goose. Tender, juicy and yes - even sweet, the rich bird was cooked well and evenÂ complimentary to its natural characteristics. Avoid the Nenaw’s Picnic Basket - the deep-fried buttermilk hen was extremely dry and straight-up bland. [caption id=“” align=“alignright” width=“240” caption=“LAPD Doughnut Shakedown”] 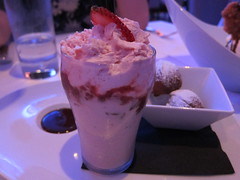 [/caption] The curious thing that everyone in my party could not ignore was that there were many a fingerling potato used as garnishes throughout the dinner…let me rephrase.Â Make that: …There were many a raw fingerling potato that garnished our dishes. How could she fail to cook potatoes correctly, or at all? The devil is in the details, girlfriend. But like I said, engage her for her strengths - and that would be the duck, mac ‘n cheese flight and bubbly cocktails (OK - and the LAPD Donut Shakedown, which was rather heavenly, actually,Â for dessert). Let’s not harp any further on her weaknesses, shall we? After all - luxury and class don’t preclude feelings. Hopefully she includes desire to improve upon substance to match. All food and cocktails were hosted. Further reading: Lots of Style, Little Substance: FirstÂ and Hope - ShopEatSleep