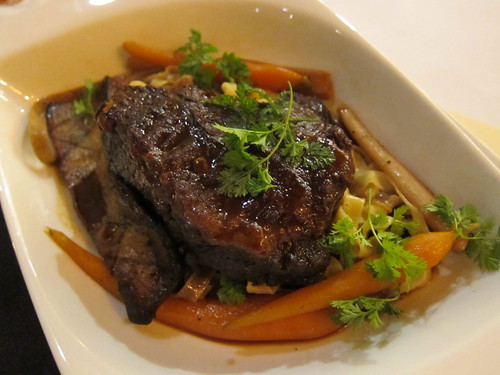 [/caption] Elements Kitchen rose out of a successful catering business by Chef-Owner Onil ChibÃ¡s and established its brick and mortar dining room in January of this year. Its menu isn’t traditionally structured; instead of the traditional appetizer-entree distinction, it asks you what you’re in the mood for. This is, after all, “New” American. But you can appreciate the emphasis on ingredients, or “elements” as the restaurant’s theme revolves around. [caption id=“” align=“alignright” width=“240” caption=“Pistachio Butter ($19 for PF&J)”] 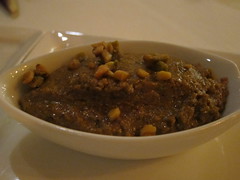 [/caption] Chicken & Birds? Lobster? Duck? Beef? Mussels & Oysters? Squash? It reads like a dozen questions in a row … but who’s to criticize an establishment that wants to pinpoint and cater to your desires to a tee? An extension of that are the extremely tasty, borderline odd creations such as Pistachio Butter, which is presented on the same platter as Foie Gras Torchon and Jellied SauternesÂ - dubbed “PF&J”.Â Plus Roasted Grapes. I’ll be honest: My mind was blown at the Pistachio Butter. But the endless combinations that were possible made it hardly polite to complain, because somehow, they worked. There are a lot of dishes at Elements that work with a few that probably try to do too much, but it’s good to see a spot in Pasadena that is taking risks for once. One of my favorites was the Braised Wagyu Beef Cheeks - which sat atop a bed of housemade Fettuccine. The Seared King Trumpets were a perfect middle texture, flavorfully connecting the Ã¼ber tender meat with super fresh pasta. [caption id=“” align=“alignleft” width=“240” caption=“Oyster & Mussel Chowder: Yukon gold potato cream, crispy pork belly ($12)”] 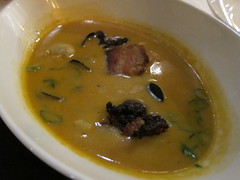 [/caption] The Oyster & Mussel Chowder was a true winner. It consisted of a delicious Yukon Gold potato cream broth and was sprinkled with shavings of crispy pork belly and green onion, thickened further with potatoes yet also crispened with celery. It was a chowder combining all the right textures and tastes, with a good helping of oysters and mussels serving as the center of the dish. A really good dish at Elements Kitchen that also happens to be pointedly vegetarian is the Spaghetti Squash with MarinaraÂ ($9). The sauce itself is quite fresh as the herbed ricotta is substantive, bringing a weight to the stringy contents of the gourd. While you’re at Elements, be sure to try out one of the cocktail creations byÂ Michel of Neve Ice - the recently-named overseer of their cocktail program. Every Wednesday, Elements features “Sketches” - which is a set of dishes that focus around one ingredient. Every Thursday are new “Liquid Sketches,” cocktails that center around another ingredient. If you’re on Twitter, you can re-tweet @ElementsKitchen on these days for a free dish or $1 cocktail. And if you’re up for dessert, don’t miss their White Chocolate & Coffee Mousse with Milk Chocolate Ganache - an absolutely divine and indulgent dessert that should send you home with your tastebuds dancing. All food and drink were hosted.

The Review: Elements Kitchen in Pasadena – all the elements of success - S. Irene Virbila for LA Times