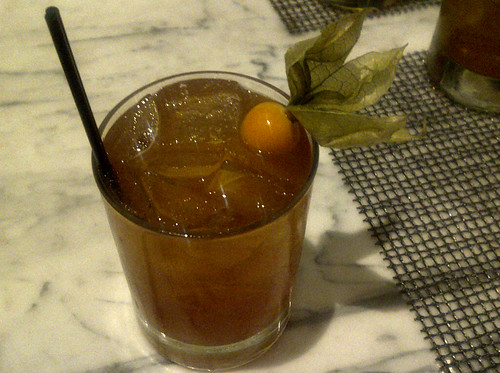 [/caption] I admit, I was off form when I took the Metro Red Line to Downtown Los Angeles last week to preview the fall cocktail menu at Drago Centro. I forgot my Canon S90 point-and-shoot camera, the device usually responsible for taking the high res shots you’re used to seeing on this blog. But my desire to safely walk in my own neighborhood and use public transportation in LA (yes - I use it) didn’t diminish my own enthusiasm when I got to Drago. (Plus, I think my BlackBerry Torch did a good job, don’t you?) [caption id=“” align=“alignright” width=“180” caption=“Eponymous”] 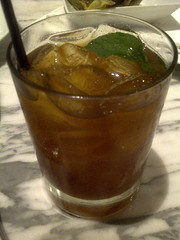 [/caption] Michael Shearin and his team put together a really good menu, and there are a few particular cocktails that I would order in a heartbeat. Caroline on Crack (her post) and Daniel of Thirsty In LA (his post) battled traffic to be at Drago and it was worth it, so it’s safe to say that these cocktails carry a bonus when you Metro it in - and to Metro it back out, again. The station is but a couple blocks away. The Dazed & Confused, which combines Casa Noble Crystal Tequila, Creole Shrub, Cherry Heering, Fresh Rosemary and Angostura, is a cocktail which Michael describes as “combining everything,” much like the inspiration for the cocktail itself. It’s a man’s drink and delicious enough for tequila drinkers. The Eponymous, which combines Appleton VX Rum, Cruzn Blackstrap Rum, Orgeat and Fresh Lime - is even more complex while utilizing rum, and pleasantly less sweet than one would normally expect a rum cocktail to be. In fact, it evolves on your palate and is the drink that keeps on giving. Very nice. [caption id=“” align=“alignleft” width=“180” caption=“5th & Fig”] 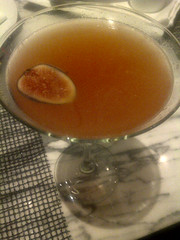 [/caption] The 5th & Fig is a special drink, because I had actually loved this drink about a year ago”) - but Michael said they served it for about a week and then on a fluke, figs had suddenly gone out of season. So, it’s back and better than ever, and even earlier this year so hopefully the figs will be here to stay, for at least a little while. The cocktail is a perfect blend of savory and sweet while really highlighting the nuances of the shrub and complementing the flavors well. It’s a nice balance, perhaps for that indecisive moment where you don’t know if you’re in the mood for something sweet or hearty. The Golden Goose is delightful bourbon drink with a lot of its charm derived from the gooseberry, itself. The Fernet is a really nice touch, which further highlights the earthiness in the bourbon. Just a touch of maple syrup is added, with compliments to Michael for not adding too much, and letting the gooseberry set the stage. [caption id=“” align=“alignright” width=“180” caption=“Smitten With Britain”] 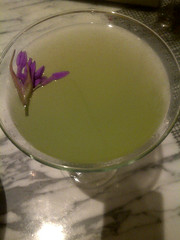 [/caption] The Greco Roman is a superb Sherry cocktail in my very little experience of Sherry cocktails. If I could ever muster a sherry craving (haven’t had one yet, to date), I could see this cocktail being my foray. Luxardo Morlacco does make it even sweeter but, I admit, perhaps a bit more palatable. The Fee Brothers Rhubarb Bitters, however, brings back in an earthy note. I guess when I make up my mind about sherry, I can have it alone. For now, it’s the Greco Roman. TheÂ Smitten With Britain, made withÂ Tanqueray Gin, Chives, Lime and Fever Tree Tonic is a beauty as it is an imaginative variation on your usual gin and tonic. The added chives and lime make this cocktail refreshing - as I guess does the visual charm of the martini glass and purple blooms. Don’t spill. [caption id=“” align=“alignleft” width=“180” caption=“Smokehouse”] 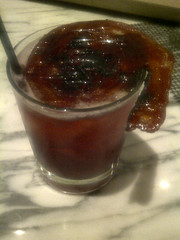 [/caption] The Smokehouse features - let’s not kid ourselves - the bacon.Â Laphroaig 10-year-old Scotch is the liquid centerpiece, here, accented with Clear Creek Cranberry, Apfelkorn, fresh apple, Fee Bros, whiskey barrel bitters and candied bacon. The smoke is thanks to the Laphroaig. I’m pretty glad I didn’t get to taste all the individual ingredients that make up this drink, because otherwise it would have been just too much. But this is your top savory cocktail on the menu - and the candied bacon swirl is alone reason enough to order this wonder. Michael gets away with not letting this one be too sweetÂ on top of the smoky - and the results are delicious. Don’t forget to order some appetizers while you’re enjoying your cocktail. And there are great bar bites to be had, like a blackÂ truffle-topped funghi calzone. Or order one of Jashmine Corpuz’s delectable sweet bites - her imaginative desserts will have you intrigued. So get to Drago Centro today: All cocktails are $8 each for the launch. It’s a great day to figure out what your favorite downtown libation is. All cocktails were hosted.