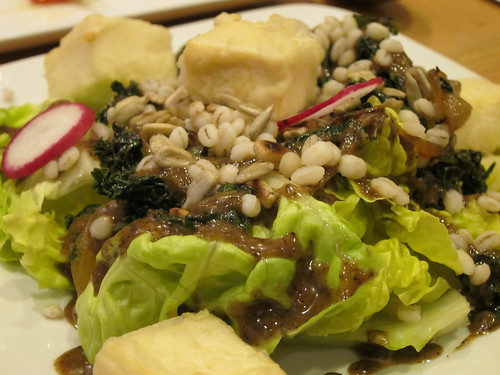 [/caption] I’ve found a couple more reasons to eat in Pasadena. With those reasons being a few favorite dishes at CHAM, I thought I’d share the news of the now one-year old Korean bistro that is actually an off-shoot of the spectacular, all-meals-prepared employee perks program of iT! jeans. The creators of the jeans line and the bistro are one and the same, and casual Pasadena diners are reaping the benefits of their kitchen. [caption id=“” align=“alignleft” width=“240” caption=“Pickle Sampler | White asparagus, beets, carrots, onions”] 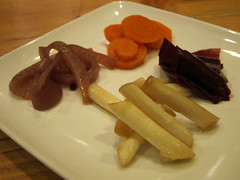 [/caption] This is definitely approachable Korean food - so all you hardcore types can save your money while those who have been previously scared away by these flavors can appreciate the foray into Korean cuisine. A great starter with a spin on the traditional was their pickle sampler, which showcases white asparagus, sweet onions, carrots and thinly sliced beets. I appreciated that the brines in which each of the vegetables were specialized with the beets and onions being sweet yet the carrots and white asparagus having a perfect amount of sour. The white asparagus was my favorite, if only because I’ve rarely seen it prepared pickled, before. [caption id=“” align=“alignright” width=“240” caption=“Spicy Cold Bibim Noodles | Assorted seasonal vegetables, spicy chili sauce, crispy rice, boiled egg”] 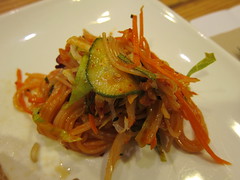 [/caption] My favorite sugared chili dish was the Spicy Cold Bibim Noodles. Bibimbab, it’s not; cold noodles with just the right, spicy flavoring to go with its cool temperature and texture - it sure is. While the dish wasn’t traditional, the flavors seemed like it. My other favorite dish was the Tofu Crouton Salad. The tofu were perfectly fried with an almost-tempura like texture on the outside. The butter lettuce was the perfect choice of greenery with barley to add a perfect weight. The black sesame vinaigrette was thankfully not too sweet and ultimately delicious. [caption id=“” align=“aligncenter” width=“500” caption=“Watermelon Salad | Arugula, watermelon, feta, mint, figs, mint vinaigrette”] 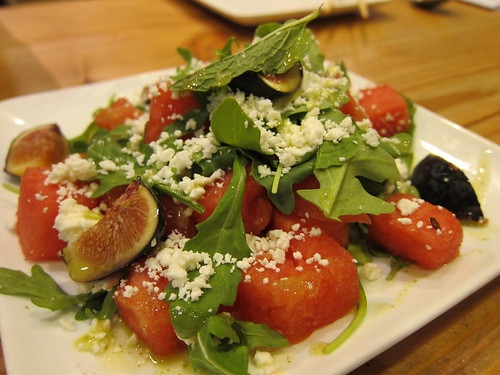 [/caption] The other favorite at this Korean Bistro is decidedly not Korean food - but let’s not fault Executive chef E.J. Jeong (former A.O.C.) for having an imagination, shall we? This other favorite featured very sweet, cubed watermelon at its center with refreshing mint notes in the salad and in the vinaigrette and generous helpings of earthy feta and figs sprinkled on top. This is the quintessential summer treat. [caption id=“” align=“alignright” width=“240” caption=“Raspberry Lambic Beer Float”] 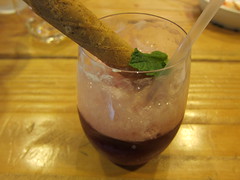 [/caption] The kicker of this eatery is that their beer list is rather intriguing and offers great pairings with the vibrant flavors of your Korean-style food. Sure, there is Hite, but also the Maredsous 8, Oskar Blues (Mama’s Little Yella Pils), Houblon (Chouffe Dobbelen IPA Tripel) and Lost Abbey’s Devotion. The wine list is also modest but really, all you need. I especially enjoyed the Saddlerock Chardonnay straight from Malibu with my food. The next time I’m in Pasadena (I am locatedÂ further east, after all) and need a bite - or three - to eat, I would certainly stop by Cham. While this isn’t the place to order your soon tofu on the scale of spiciness like an O.G. Korean eatery, Cham is a place that does justice to and serves its influences well. P.S. - At the end of your meal, don’t forget the raspberry lambic beer float made with Framboise. Unlike other beer floats, this one is decidedly a dessert for your sweet tooth! All food, beer and wine were hosted.