Favorite Places To Eat Raw Oysters on the Halfshell 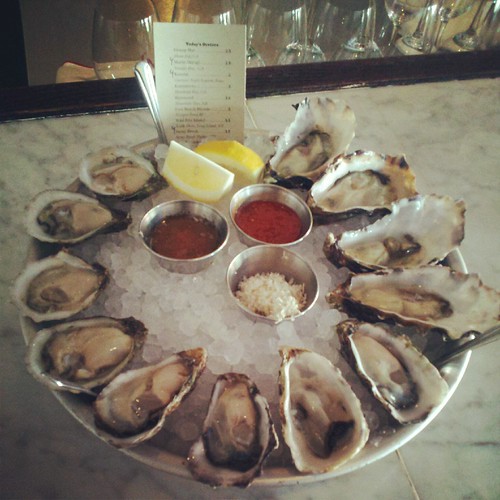 [/caption] If you’ve been following my Twitter feed, you’ve probably noticed how much I’ve been craving oysters recently. For awhile, I wasn’t exactly sure whether it was a by-product of my trip to New York - every day of which I enjoyed raw oysters (and what a glorious trip it was). As it appears, my itch has failed to taper off whatsoever. So what am I to do except create a round-up of my go-to spots for raw oysters on the halfshell? It’s pretty much the best seafood to consume in the world, with 95% of all oysters consumed being farmed with sustainable practices. And if bacon were vegan kryptonite, oysters are almost vegan … kale-beet salad? Having no central nervous system, oysters feed off plankton while filtering the waters around them and actually benefiting nearby marine life. Check them out on Seafood Watch to see that they’re “Best Choice” when it comes to consuming seafood. I’m lucky enough to have great options in my neighborhood offering quite a variety of ambiances, as well as a variety of oysters to enjoy between Oysterholics Anonymous meetings, to boot. Of course, you’ll find more West Coast varieties with a sprinkling of East, but never fear - you’ve a handy online oyster guide spun off Rowan Jacobsen’s book to guide the way. It’s a fantastic way to have info on each oyster handy at your fingertips. Anyway, back to it. Here’s where I personally break to slurp on those briny and not-so-briny bivalves. And yes, it’s centered on Hollywood and Silver Lake since this is my hood! 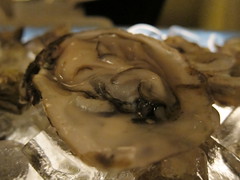 Located down from The Satellite and across from LA MILL, the no-reservation L&E Oyster Bar is a great place to grab a dozen - the Daily Dozen, to be clear.  You’ll get three varieties while saving a few bucks off the per-oyster price. Wash each oyster down with one of the excellent varietals of wine (after all, Dustin Lancaster and Matthew Kaner also brought us Bar Covell). L&E is already a neighborhood favorite but also the subject of a recent S. Irene review, so your best bet is to arrive near their 5 PM opening time. It’s often slammed, but when it comes to oysters it’s easy to see why.

Jonesin’ for bivalves on a Tuesday? Escape into the Roosevelt Hotel and into this 1960’s library-esque restaurant with moss-lined dining rooms, high ceilings and rustic interior for their special oysters and Champagne menu. They’ve a dozen varieties of West and East Coast that switch out from week to week - so whether you want $14 for a half dozen, $20 for nine, or $28 for the dozen, you’ve got a few increments to choose from. And if you’re not looking to end on bubbly, there’s two awesome bars in the same hotel: The Spare Room and Library Bar.

Well look at that, little French Champagne & cocktail bar! This latest venture by Steve Livigni, Pablo Moix and Mark and Johnnie Houston is just one of those bars I’m so glad is in town - oysters or not. But hey, if oysters are a go, then you’ll really find no other place in the city with better libations to slurp them down with. If cocktails are the new food-is-the-new-rock, Pour Vous is essentially your rock supergroup with a vast but excellent menu featuring 26 drinks. But don’t come here if you’re looking to grab a dozen in your sweatpants; remember to come with a jacket and/or collar, guys, and ladies - you’ll have tons more fun dressed to these fabulous surroundings in your sharp garb. If you’re lucky, Livigni will be on deck…er, on the decks. 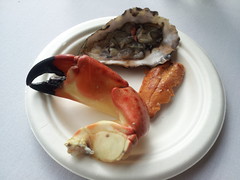 [/caption] Hungry Cat’s really been the neighborhood stalwart of seafood, so when power duo David Lentz and Suzanne Goin expanded all the way over by PCH in Santa Monica, our city’s beachcombers rejoiced. Whether you supplement your oysters with one of their solid cocktails or get them as a prelude to their annual CrabFest (which sells out soon after it’s announced), you really can’t go wrong. Get the half-dozen for $15 or a full dozen for $30 - and supplement with plenty other shellfish and seafood - including plenty of other raw iterations - at will. Parking in the complex lot is also a cinch thanks to 2-hour validation.

Let’s not forget your own place or event. I was at a Dine LA media party once, and my friends and I were essentially glued to Christophe Happillon’s shucking station. It was the best party, ever. Everything I learned about oysters (away from the internet), I learned from this guy. You’ll learn a ton about oysters in the process, as in how environmental conditions and geography play a role in how each variety looks and tastes. You can also seek him out on Tuesdays at Church & State and Fridays at Joe’s Restaurant. I’ll see you at the oyster bar!