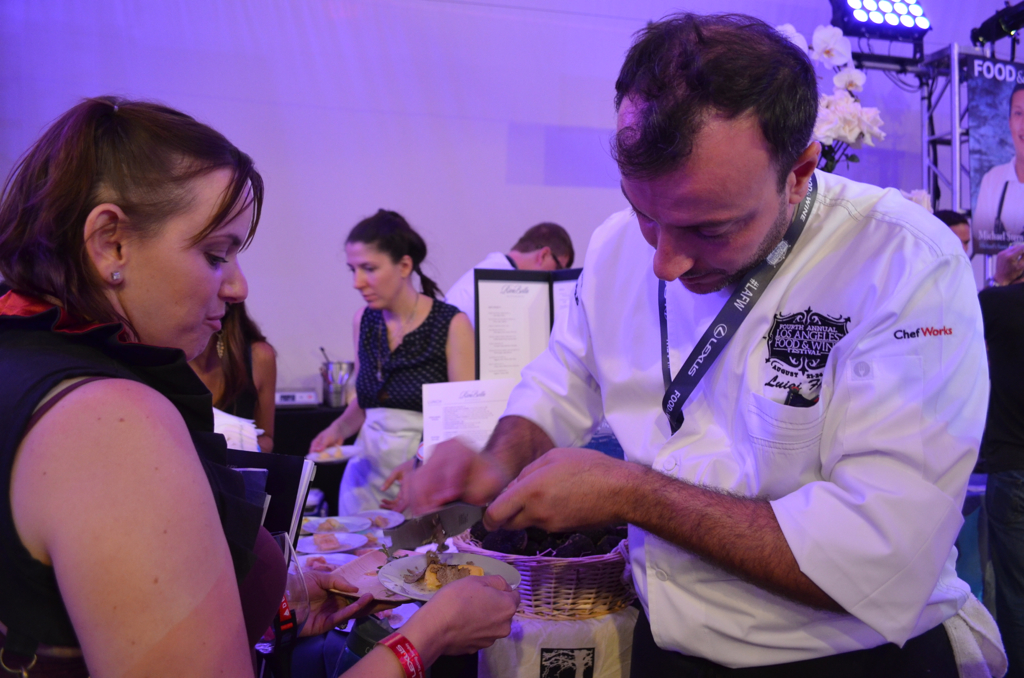 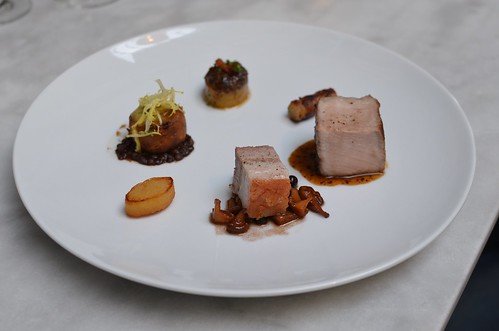 Dry-aged Cooks Ranch Pork, 5 ways - Walter Manzke[/caption] Impressive dishes included Michael Tusk’s Fagotelli of Zucchini and their blossoms, with dry farm tomato and fior di bufala. It was a savory bomb with bright notes thanks to its beautiful squash sauce. Walter Manzke prepared an impressive Dry-aged Cook Ranch Pork prepared five ways and paired with Gala apple, boulangére potato and cider-peppercorn sauce (Josh Lurie of Food GPS has this Vitamin P dish - FoodGPS.com”) on lockdown). Sometimes, in lieu of bite after bite while finagling multiple plates and your wine glas, you just want to spend a Friday afternoon sitting down while enjoying a coursed-out meal by a couple of solid chefs. And this experience lived up to the expectation. The uni–eggs-truffle-topped toasts before the meal and Margarita Manzke’s epic dessert, “Coffee & Donuts,” bookended a very impressive lunch. Pairing Cheese & Champagne with First Lady of Fromage [caption id=“” align=“aligncenter” width=“500”] 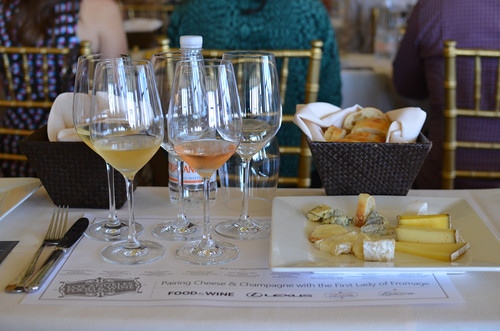 Cheese and Champagne[/caption] The First Lady of Fromage, Laura Werlin, led us on an exploratory, if not experimental, seminar on pairing cheeses with Champagne – specifically Lanson Champagnes. I loved the selection of cheeses Laurea picked out for us to try, starting with a creamy goat with a lovely rind and moving on to harder cows’ and sheeps’ milk cheeses as well as a super soft Bourgogne, an ammoniated (in the best way) Camembert and ending on some true cows’ milk favorites from Cowgirl (Red Hawk) and Rogue Creameries (Rogue River Blue). The Lanson Champagnes were also super lovely, with their White Label going with most of the cheeses, and the Extra Age and Gold Label from 2002 being real treats. But I’m not sure if I’d choose Champagne over white wines to pair with cheese if it all came down to it. Cocktail Revolution with Julian Cox & Chef Timothy Hollingsworth [caption id=“” align=“aligncenter” width=“500”] 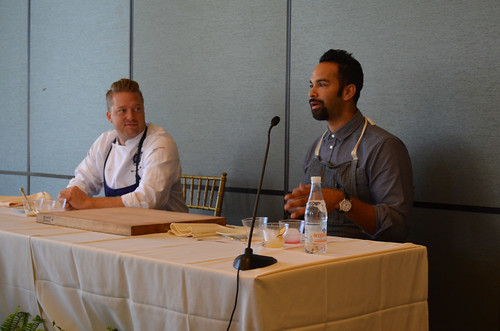 Timothy Hollingsworth and Julian Cox[/caption] It’s always a way to see what’s up and coming when the leaders of the panel or seminar include a pioneer in the Los Angeles cocktail world and a recently-transplanted chef alum of The French Laundry who happen to be opening a restaurant together along with Eli Broad. [caption id=“” align=“alignright” width=“240”] 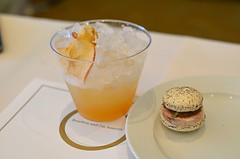 Bourbon ‘n I’m Swervin’, Pork belly macaron[/caption] In sharing about their food-cocktail collaboration, Chef Hollingsworth and Mr. Cox talked a lot about how a lower cocktail ABV is essential in pairing drinks with food so that the latter is not overpowered. We also got to try three such examples, such as the their riff on an affogato, Amaro Never Dies. In discussing the latest trends in the kitchen and behind the bar, they mentioned culinary bartending and house fermented cocktails. Chef Hollingsworth revealed he’s a big believer in having his employees switch shifts with each other so they can get a better understanding of as well as increased empathy between each other’s back of house & front of house roles. In fact, Hollingsworth is taking Cox’s cocktail class, himself. In preserving the bar experience while meeting the high demands of a busy night, Julian maintains that the most important ingredient is a service bar dedicated to making drinks so that the bartender behind the stick isn’t drowning in tickets. They also revealed some details about their upcoming restaurant, which will potentially be named after a certain tree they ares till trying to procure. Whatever it is, the restaurant has shot up to my top anticipated opening of 2015. Lexus Grand Tasting - Sunday Afternoon [caption id=“” align=“aligncenter” width=“500”] 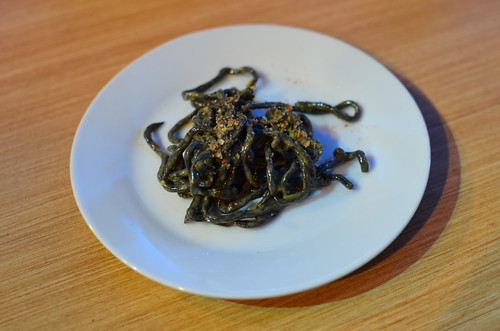 Squid ink chitarrina, sea urchin, fermented chilis, mint, bread crumbs - Bucato[/caption] I had dedicated the weekend’s nightly activities to a certain overrun, disorganized music festival south of LAFW, and so I minimized my grand tasting attendance to Sunday afternoon at L.A.’s Center Studios. While I didn’t get to try everything I wanted to, I observed a couple things: The length and pace of the Eggslut line from Grand Central Station basically duplicated itself at the Grand Tasting. Pasta and noodles were the standouts of the afternoon - including that black truffle-drenched corn agnolotti from RivaBella. Delta Airlines’ lanyards were perfect for handless wine glass holding. And the only thing missing was probably coffee. [caption id=“” align=“aligncenter” width=“500”] 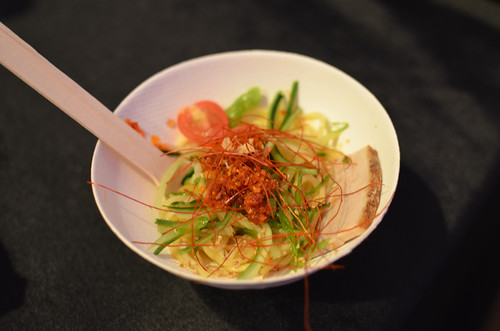 Iron Chef Morimoto’s Cold Ramen with Pork Belly[/caption] But if you’re into trying a little bit of everything, definitely go for the tastings. If you’re into the setting, go at night, when they take place at the foot of Frank Gehry’s legendary Walt Disney Concert Hall. If lines are what you’re trying to avoid, go for the tastings during the daytime. Til next year…