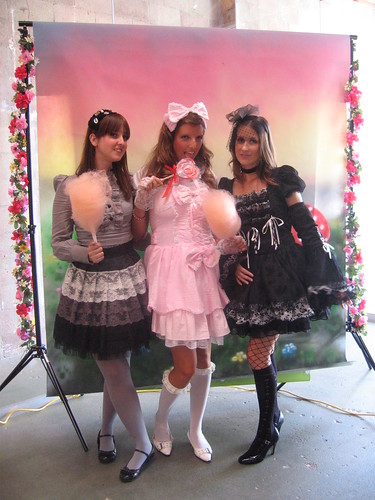 I didn’t know much about the Lolita craze (or any other Japanese craze, for that matter), but when Julie Wolfson of LAist told Caroline on Crack and me that she had girls that would be participating I decided to give the scene a look-see. Cute? Yes. Pink? Certainly. Youthful? Of course.

There were abundant helpings of cotton candy for all guests to enjoy and one could get a good glimpse of the Lolita movement by looking at Royal/T’s merchandise - as well as all the girls who came dressed to be photographed themselves. It was great to see personal style embraced through dressing up in the genre. I found myself saying, “Oh that’s cute!” probably a hundred times too many. 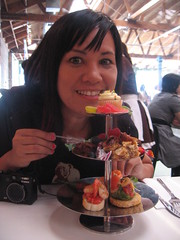 To start out, Caroline and I decided to try the High Tea the shop serves during normal business hours. Apparently, it didn’t seem as though they staffed help to accommodate the additional guests there specifically for the Lolita party. It was hard to get an order in as well as get decent service thereafter. And I got an iced green matcha tea - which was refreshing enough. Maybe I needed to get a hot tea to be able to appreciate a tea brew. The tray that served the food was somewhat unremarkable, though, complete with gummy worms on the top tier. The bruschetta and crostini bites at the bottom were decent enough. All in all, especially with the lack of service, our High Tea experience left me questionable on whether I’d return for the food or tea.

So it was good there was so much eye candy to enjoy. The scene was such that the whole point was to have pictures taken of you in your outfit and admire everyone else in theirs. As for Caroline and me - we were content to observe. Accessories - the finishing touches - were so fun to scoop, like the cupcake-sized hats, knee-high socks and clunky shoes. I ended up buying a little tiara for my wrist. 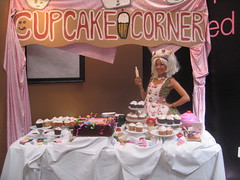 I know. My wrist? I can’t really figure out what to do with it now, either. Needless to say, I got caught up in the moment of cuteness and mislead myself into believing that’s how I dressed - if even a little bit. Nope.

But it was fun to gape at dolls that were interesting to look at but two or three of which might cost me a month’s rent. I especially liked the goth versions. It seemed as though there was a lot of pink and black - either you were a sugary sweet or a pouty gothic Lolita. And all the boys who may or may not have been nearby to appreciate the scene…yeah. I’m not one to assume or judge about anyone, but there were some that gave me the creepies in there!

Royal/T’s space, however, is interesting. If nothing else - they have an art space which changes its display periodically and ultimately is in keeping with the Culver City art scene nearby. The servers happened to fit in with the LolitaÂ party as they are dressed in maid outfits anyway, but I think I have to visit again during normal business hours to give Royal/T a fair shake.