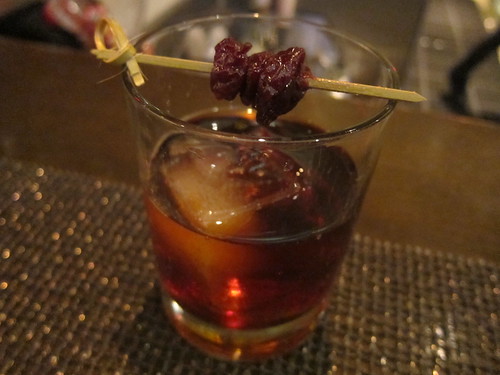 [/caption] There’s something really exciting going on behind the bar at a certain restaurant in Downtown LA. No, it’s not the craftiness of a Michael Shearin, who has since left for a brand ambassador position - but the hardly rookie beginnings of Jaymee Mandeville as dreamer of the newest winter cocktail menu at Drago Centro. [caption id=“” align=“alignright” width=“180” caption=“Grimhilda | Laird’s Bonded Apple Brandy, Pama, Chipotle Infused Honey, Lemon”] 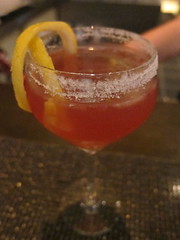 [/caption] It’s a menu that has really good range, while at the same time having solid representations in each corner. To be honest, there was only one of ten cocktails on the list that I disliked and over a handful that I would easily order for my friends on recommendation of the spirit they preferred or myself based on that day’s mood. There were even more cocktails I was excited about than I shared an indifferent opinion about. For instance, the Bols Genever-based Rode Duvel lived up to the high expectations I had for it. It’s enhanced with St. Maria Al Monte Amaro, which is a more bitter amaro and goes so well with the Bols and Miracle Mile Sour Cherry bitters. Be sure not to ignore the dried cherry garnish, as your drink only tastes better paired with each bite of the skewer. It was quite the cocktail to reinforce my love of Bols. [caption id=“” align=“alignleft” width=“240” caption=“Western All’italiana | High West Double Rye, Cointreau, St. Elizabeth All Spice Dram, cranberry and oregano infused molasses, Gala apple”] 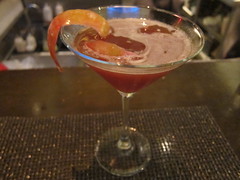 [/caption] For that friend who may shame you by ordering that Cosmopolitan, order him/her a Grimhilda instead. Made with Laird’s Bonded Apple Brandy, Parma, Housemade Chipotle Infused Honey and lemon, its sugar rim is actually an asset and not an obstruction to the cocktail (it has just enough). The chipotle honey does enough to help keep its sugary profile intact but interesting, and you may just wow that craving for cranberry out of your friend. The every man’s fizzy cocktail would have to be Fated Seeds. This is a cocktail that’s sure to convert former gin avoiders. Persimmons in this cocktail were practically pickled and given a sort of vinegared acidity, without which would’ve made the persimmons evaporate. The basil shrub was a nice aromatic note while a soda topping gave it its effervescence. [caption id=“” align=“alignright” width=“240” caption=“Breaking Castagne | Hardy VSOP Cognac, Sombra Mezcal, Bitter Truth Mole Bitters, Housemade Italian Chestnut Syrup, egg white, nutmeg”] 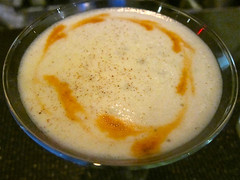 [/caption] An unexpected favorite of the night was the Western All’italiana, made with High West Double Rye, Cointreau, St. Elizabeth All Spice Dram, cranberry and oregano infused molasses, and a Gala apple peel garnish. The cocktail really showcases the all spice, cranberry and oregano beautifully. Of course, it goes without saying that I will ever have the double rye in my corner - so while it gets more than its fair shake, I have to stress that all the infused flavors do well to complement. The Breaking Castagne is Drago’s winter egg nog - only better. The VSOP gives it that warmth and the mezcal just the right amount of smokyness, but the chestnut syrup is, of course, the real, winter-y centerpiece here. [caption id=“” align=“alignleft” width=“240” caption=“Eve’s Demise | Black Grouse Scotch, Belle de Brillet Pear Cognac, Housemade hibiscus apple cider, maple syrup”] 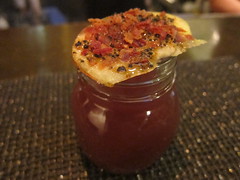 [/caption] And then there were the drinks that steadfastly held their corner. The Dead Man’s Tale is the menu’s tiki drink and a play on the Fog Cutter - made with Wray and Nephew Overproof Rum, Bombay Dry Gin, Bertagnolli Grappa, Oloroso Sherry, Bietterman’s Amer Nouvelle, St. Vincent’s Orgeat, lemon, orange and Galliano mist. It was delicious, even though tiki drinks aren’t usually my go-to. The Remedy X holds its own as the ginger lovers’ cocktail. Made with rosemary infused Bushmill’s Blackbush Irish Whiskey, ginger infused agave and lemon - the rosemary gave this drink a nice, floral twist. And of course, it had the essential candied ginger garnish. The spicy cocktail of the bunch is the silver Screen Quotations, made with 123 Organic Blanco Tequila, housemade thai chili/cinnamon syrup, red bell pepper, mint, lime and saffron salt. The mint is a nice, aromatic twist that gives the whole cocktail a refreshing take. But if you’re looking for that quintessential, surprise-me hot toddy, look no further than Eve’s Demise, made with Black Grouse Scotch, Belle de Brillet Pear Cognac, housemade hibiscus apple cider (mmm) and maple syrup. The delicious garnish alone deserves its own double take, but I honestly had a hard time putting this cute little jar-encased hot sipper down. Fortunately, you can taste all of these tonight at the winter menu cocktail launch for $8 each. Bring the gang, since there’s a drink on the menu for everyone. This delicious menu is sure to delight and satiate your craving for that perfect winter cocktail. Winter cocktail menu tasting was hosted.

$12 each all other times