Dr. J's Vibrant Cafe: All the Health, All the Flavor 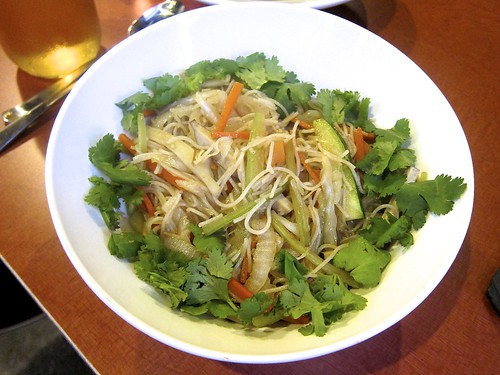 Rice Noodle Delight Bowl[/caption] It’s not enough, these days, to simply give a pass to vegetarian and vegan food. Going past crunchy, granola stereotypes often attached to a plant-based diet, I imagine, has to be a welcome option for those having adopted conscientious lifestyles. Good thing there’s Dr. J’s Vibrant Cafe, a place you’ll want to visit for their teas and shakes but also their food - no matter what your diet. Because even if you’re an omnivore in Los Angeles, you’ll still eat out with some friends you might oblige with a more than the couple options than, say, what you might find on a menu at a BBQ place. (I know. The sacrifices you make.) [caption id=“” align=“alignright” width=“240”] 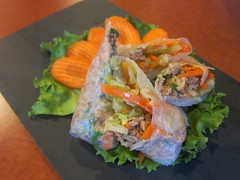 Minced Chunks Spring Wrap[/caption] And at Dr. J’s, you’ll go vegan for a meal, but you won’t have to sacrifice any of the flavor. With Dr. J hailing from Taiwan, you’ll find many Asian-inspired dishes with that Buddhist-kind-of-vegan slant, but made with Californian ingredients and falling in line with macrobiotic and gluten-free code. Kale is tossed in a wok, brown rice is at the base of the rice bowls and tofu is all over the menu - but it’s all creative variations on deliciousness with every ounce of the conscientiousness. While you’re there, you’ll at least want what happens to be the least expensive thing on this reasonably priced menu - a glass of Dr. J’s Cleansing Balance Tea, made of an herbal mix formulated by Dr. J over 20 years ago. And Dr. J’s Herbal Shakefusion, with my version being a base of almond milk (the base is what you choose) blended with a cocktail of 20+ herbs and an organic banana. It was absolutely delicious; the banana flavor was a subtle base for this herbaceous shake. I downed mine, right away. [caption id=“” align=“alignleft” width=“240”] 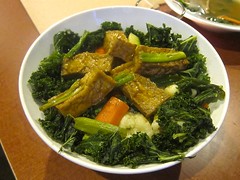 Grilled Tofu Bowl plus kale[/caption] Marinated tofu chunks sub for meat, and it’s largely successful - at least in the spring rolls (Minced Chunks Spring Wrap) that featured them, which were a favorite of both my vegetarian friend Toko’s and mine. The Spring Sea Vegetable Soup was also delicious, with seaweed, strips of firm tofu, carrot and ginger swimming in a light but flavorful broth. Options such as quinoa, salads and sandwiches are ones I’ll have to try on future visits. They also offer many different teas, milks (coconut, almond, soy and organic rice) and formulated fruit-vegetable “healing juices.” I found the Banana “Ice Cream” - pureed frozen bananas - the most plausible of all the valiant efforts at dessert, but vegans might find their bakery selection stellar. [caption id=“” align=“alignright” width=“240”] 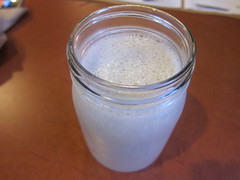 Almond Milk Herbal ShakeFusion[/caption] There’s much to be said, too, for an establishment that serves a menu which reflects a diet that the owner and her son have adopted for their own health reasons. A woman who served us confessed she had moved all the way from Seattle to work at Dr. J’s because she had adopted the diet, experienced improved health, and wanted to live out her diet’s success story. Results such as weight loss and the alleviation of allergies, rhumatoid arthritis, yeast and parasitic disorders were achieved by Dr. J and her son with this cooking, and that in itself is vegan Kool-aid that’s hard to argue with. I’ll take that banana smoothie, now. All food and drink were hosted.