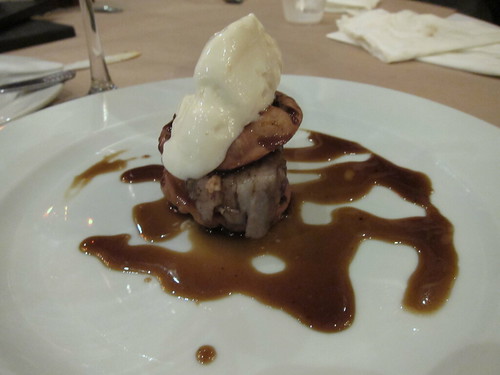 [/caption] Only pork could be worthy motivation to spend a mere 8 hours south of the border. Last night’s trip was my first time crossing that border - and it was well worth it. Bill of Street Gourmet LA guided Jo of My Last Bite, Fiona of Gourmet Pigs (ha ha) and me around that Northern Mexican city and I can vouch that he is an invaluable guide to have. The flyer said “Pork 5 Ways” and indeed, there were 5 chefs, but there were more than 5 ways in which pig was prepared. My favorite dish was the dessert - and I loved that it being dessert was nary a reason to cop out of the theme. It blew my mind in execution. The BuÃ±uelos itself was a crunchy, crispy wafer with hints of cinnamon and sat on top of braised, soft pork belly. The pork belly itself wasn’t marinated in anything especially remarkable and was allowed to stand on its own, with the assembly on the plate carrying it through. The sweet agave syrup drizzled over the dish was just the right amount of sweetness to not make it saccharine. It was also infused with bacon, which matched the depth and heft of the dish. But the perfect touch? The ginger and lemon grass ice cream. The refreshing, cold notes of the ice cream brought perfect highlights, really finishing the dessert off nicely with some kick. This dish was brought to us by Chef Paul Zamudio of Cabo San Lucas, who also prepared delicious pork cheeks sous vide - another one of my favorites for the night. I hope that the border doesn’t continue to separate his cooking from my palate - but I’m sure that Bill will see to it that it doesn’t. By the way, this post is dedicated to Josh of Food GPS, whose love of pig consumption (and his detailing the best dishes in his Dose of Vitamin P series) has always inspiredÂ this particularÂ Tijuana crew. We were sad to hear of his recent week of disappointing pork dishes, and thought he had somehowÂ ”taken one for the team” since our porkÂ dishes in Tijuana were so successful.Â So thanks, Josh.