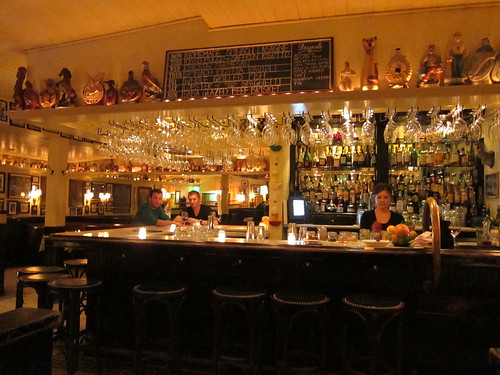 Sometimes, it’s not enough that you get a strong pour from the bar. You want that bar to be worth your time as you enjoy your drink. Fortunately, Dominick’s has not one but a couple beautiful bars (a smaller one is just outside on their newly re-done patio) at which you can sip - and it’s a perfect setting within which to try their new fall cocktail menu. Much of what was there in 1948 is still at Dominick’s now, and the place has the charm and hospitality to match.

Is West Hollywood not your speed? No problem - just hop on over to Little Dom’s in Los Feliz, where for the first time, they’ll also be featuring the sameÂ cocktail menu as Dominick’s. I was a latecomer to a preview first started off by Caroline on Crack, Daniel of Thirsty in LA and Aaron, the Savory Hunter, but got some pretty tasty sips in and deemed the Scotch Leaf my favorite original cocktail of theirs.

Find the menu below with their explanations. My notes (if any) follow each cocktail.

It was probably the maple bitters thatÂ really did it for me. The egg white wasn’t too obvious and I love how everything just really worked with the Scotch. 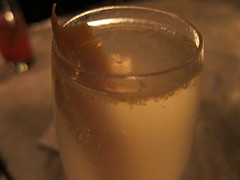 Not the best executed Manhattan I’ve had (pretty watery) but it paled so much in comparison to the others that I’ll call it a fluke.

This drink was created in the early 1920s by the Mob on the south side of Chicago. The gin at the time was not as palatable due to prohibition, so mint and/or basil and lemon were used to cover up the flavor. Dominickâ€™s version uses basil and cucumber and a very floral gin, Damrak, from Amsterdam. 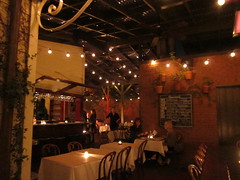 Basing my assumption on the color (a bright pink), I thought this would be a sweet drink but I was pleasantly surprised at how nuanced it really was. It had just enough Triple Sec and Raspberry to compliment the juniper in the gin. Delicious. Apparently, it’s meant to replace the Raspberry Lemonade from summertime, and I’d say it’s a great adaptation. 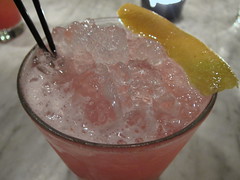 This would easily be my mimosa replacement at any brunch time. So much more complex and even refreshing, with the absence of weighty orange juice.

The solid tequila cocktailÂ stalwartÂ of the bunch. Very delicious and a great introduction - you’ll be hard-pressed to find another tequila cocktail that goes down smoother.

So head on over to Dominick’s or Little Dom’s and taste the new fall cocktails we were lucky to enjoy. They’re really good and with the charming atmosphere and neighborhood vibe, you just can’t lose.